This website requires the use of Javascript to function correctly. Performance and usage will suffer if it remains disabled.
How to Enable Javascript
Thousands Flee Hong Kong for UK, Fearing China Crackdown 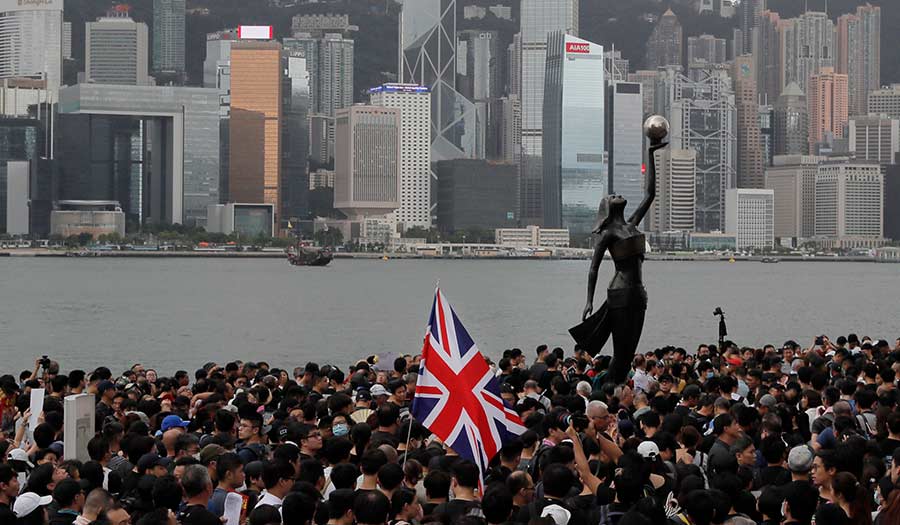 Thousands of protesters carrying the British flag march near the harbor of Hong Kong (July 7, 2019).

HONG KONG (AP) – Thousands of Hong Kongers have already made the sometimes painful decision to leave behind their hometown and move to Britain since Beijing imposed a strict national security law on the Chinese territory last summer. Their numbers are expected to swell to the hundreds of thousands.

Some are leaving because they fear punishment for supporting the pro-democracy protests that swept the former British colony in 2019. Others say China’s encroachment on their way of life and civil liberties has become unbearable, and they want to seek a better future for their children abroad. Most say they do not plan to ever go back.

The moves are expected to accelerate now that 5 million Hong Kongers are eligible to apply for visas to Britain, allowing them to live, work and study there and eventually apply to become British citizens. Applications for the British National Overseas visa officially opened Sunday, though many have already arrived on British soil to get a head start.

Britain’s government said some 7,000 people with British National Overseas passports—a travel document that Hong Kongers could apply for before the city was handed over to Chinese control in 1997—have arrived since July on the previously allowed six month visa. It estimates that over 300,000 people will take up the offer of extended residency rights in the next five years.

“Before the announcement of the BN[O] visa in July, we didn’t have many enquiries about U.K. immigration, maybe less than 10 a month,” said Andrew Lo, founder of Anlex Immigration Consultants in Hong Kong. “Now we receive about 10 to 15 calls a day asking about it.”

Mike, a photojournalist, said he plans to apply for the visa and move to Leeds with his wife and young daughter in April.

His motivation to leave Hong Kong came after the city’s political situation deteriorated following the anti-government protests and he realized that the city’s police force was not politically neutral. The police have been criticized by pro-democracy supporters for brutality and the use of excessive violence.

Mike said moving to Britain was important as he believed the education system in Hong Kong will be affected by the political situation and it will be better for his daughter to study in the U.K.

He agreed to speak on the condition that he only be identified by his first name out of fear of official retaliation.

Mr. Lo said that with the new visa, the barrier to entry to move to the U.K. becomes extremely low, with no language or education qualification requirements. British National Overseas passport holders need to prove that they have enough money to support themselves for six months and prove that they are clear of tuberculosis, according to the U.K. government.

Currently, Mr. Lo assists three to four families a week in their move to the U.K. About 60 percent of those are families with young children, while the remaining are young couples or young professionals.

In Hong Kong, she had a comfortable lifestyle. She owned several properties with her husband and the business she ran was going well. But she made up her mind to leave it all behind as she felt that the city’s freedoms and liberties were eroding and she wanted to ensure a good future for her kids.

Cindy, who also spoke on the condition she only be identified by her first name out of concern of official retaliation, said it was important to move quickly as she feared Beijing would soon move to halt the exodus.

Prime Minister Boris Johnson said this week the visa offer shows Britain is honoring its “profound ties of history” with Hong Kong, which was handed over to China on the understanding that it would retain its Western-style freedoms and much of its political autonomy not seen on mainland China.

Beijing said Friday it will no longer recognize the British National Overseas passport as a travel document or form of identification, and criticized Britain’s citizenship offer as a move that “seriously infringed” on China’s sovereignty. It was unclear what effect the announcement would have because many Hong Kongers carry multiple passports.

Beijing drastically hardened its stance on Hong Kong after the 2019 protests turned violent and plunged the city into a months-long crisis. Since the security law’s enactment, dozens of pro-democracy activists have been arrested, and the movement’s young leaders have either been jailed or fled abroad.

Because the new law broadly defined acts of subversion, secession, foreign collusion and terrorism, many in Hong Kong fear that expressing any form of political opposition—even posting messages on social media—could land them in trouble.

“This is a really unique emigration wave—some people haven’t had time to actually visit the country they’re relocating to. Many have no experience of living abroad,” said Miriam Lo, who runs Excelsior UK, a relocation agency. “And because of the pandemic, they couldn’t even come over to view a home before deciding to buy.”