This website requires the use of Javascript to function correctly. Performance and usage will suffer if it remains disabled.
How to Enable Javascript
“I Can’t Be Silent”: Hong Kongers Defy Ban on Tiananmen Memorials 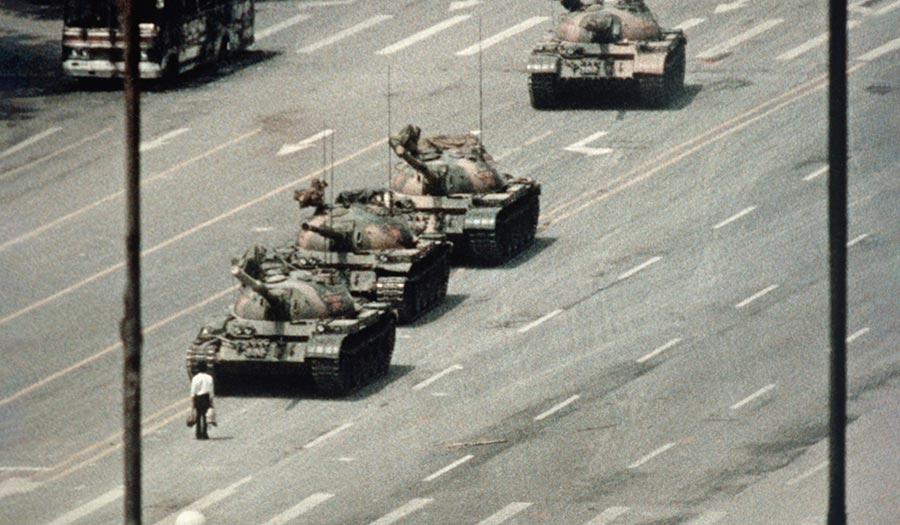 Bettman/Contributor via Getty Images
A demonstrator blocks the path of a tank convoy near Tiananmen Square in Beijing (June 5, 1989).

HONG KONG (Reuters) – Police fired pepper spray at Hong Kong protesters on Thursday who were defying a ban to stage candlelit rallies in memory of China’s 1989 Tiananmen Square democracy crackdown while accusing Beijing of stifling their freedoms too.

The scuffles broke out in the working-class Mong Kok district when demonstrators tried to set up roadblocks with metal barriers and officers used spray to disperse them, according to Reuters witnesses.

It was the first time there had been unrest during the annual Tiananmen vigil in Hong Kong, which police had banned this year citing the coronavirus crisis.

Several thousand people joined the main rally in Victoria Park, chanting slogans such as “Liberate Hong Kong, revolution of our time” and “Fight for freedom, stand with Hong Kong.”

“We are just remembering those who died on June 4, the students who were killed. What have we done wrong? For 30 years we have come here peacefully and reasonably, once it’s over it’s ‘sayonara’ [goodbye],” said Kitty, a 70-year-old housewife.

The anniversary has struck an especially sensitive nerve in the former British-ruled city this year after China’s move last month to impose national security legislation and the passage of a bill outlawing disrespect of China’s national anthem.

United Kingdom Prime Minister Boris Johnson voiced government support for Hong Kong by offering millions the right to live and work in Britain if China imposes new national security laws on the territory. If the roughly 3 million Hong Kongers eligible for UK citizenship emigrate, it would deprive the territory of almost half its current population.

In Beijing, security around Tiananmen Square, a popular tourist attraction in the heart of the city, appeared to be tightened, with more police visible than on ordinary days.

But many took to the streets to light candles and stand for a minute’s silence. Seven Catholic churches opened their doors for memorials.

“We are afraid this will be the last time we can have a ceremony but Hong Kongers will always remember what happened on June 4,” said Brenda Hui, 24, in the working class district of Mong Kok, where she and a friend stood with a white battery-illuminated umbrella that read “Never Forget June 4.”

China has never provided a full account of the 1989 violence. The death toll given by officials days later was about 300, most of them soldiers, but rights groups and witnesses say thousands of people may have perished.

There was no mention of the anniversary in Chinese state media. But Hu Xijin, editor of the Global Times, a nationalistic tabloid published by the ruling Communist Party’s People’s Daily, tweeted a screenshot of the U.S. statement with his own commentary.

“The Tiananmen incident gave Chinese society a political vaccine shot, which has enabled us to be immune to any colour revolution. 31 years later, riots emerged and spread in the U.S. They only think of exporting it, but forget to prepare vaccine for themselves.”