This website requires the use of Javascript to function correctly. Performance and usage will suffer if it remains disabled.
How to Enable Javascript
The New Silk Road – China’s Path to Global Authority 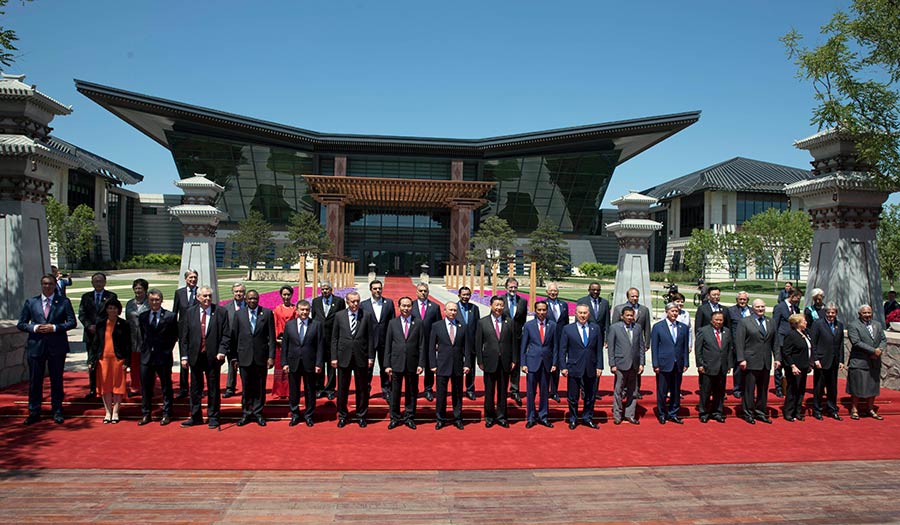 China never does anything small.

The Great Wall of China, built nearly 2,300 years ago, crosses nine provinces and is 13,170 miles long—more than half the length of Earth’s circumference. The famous Terracotta Army, a mass of 8,000 unique life-size statues, was made to accompany China’s first emperor, Qin Shi Huang, in the grave. The ancient Silk Road was a 4,300-mile trade route used to link China with the Middle East and Western civilizations.

It should come as no surprise that this nation is now funding the largest infrastructure project the world has ever seen, dubbed “The New Silk Road.”

The ancient road created a physical connection between cities, nations and cultures. Although it would take migrants and traders nearly two years to traverse the path in its entirety, it established the first viable means for trading with countries thousands of miles away.

Its modern counterpart seeks to establish and promote trade in much the same way. Also named the One Belt and One Road (OBOR), this nearly $1 trillion initiative will use modern interstates, railways and ports to boost international trade and strengthen economies throughout Europe and Asia.

In a keynote speech on OBOR, Chinese President Xi Jinping declared, “China’s Belt and Road Initiative is based on the historic roots of the Silk Road; it focuses on Asia, Europe and African continents, and is open to all friends.”

Many nations worldwide are praising China’s resolve to think outside its borders. Italian President Sergio Mattarella and French Prime Minister Bernard Cazeneuve each visited China in February 2017 to show support for this initiative. OBOR Europe reported: “The Italian president insisted on Italy’s willingness to take part in the new Silk Road project and to build the infrastructure necessary for the realization of the OBOR. Mattarella thus emphasized the possible role that the Italian ports of Genoa and Trieste could play in the development of the new maritime Silk route.”

Although many nations support China’s effort, the logistical challenges to implement this plan are great.

For its New Silk Road, China is coordinating hundreds of infrastructure projects simultaneously across eight time zones, all with unique climates and terrain. No two nations have the same language, government regulations, or building standards. This sheds a different light on the scope of One Belt One Road and reiterates China’s desire to “go big.”

Consider how long it takes to build just one road even when all parties involved speak the same language, abide by the same regulations, operate within the same time zone, function within the same climate, and are accustomed to the same building methods and philosophies.

Planning and engineering alone can take up to three years before permits are granted and construction begins. After determining the location, environmental concerns, social effects and costs, dozens of subcontractors work to excavate, form and erect the infrastructure. Progress is routinely halted due to weather, government regulations, and unexpected problems that arise along the way.

Because the magnitude of China’s project has never been attempted before, many are asking, why is China doing this now?

China’s modern approach to infrastructure is one-of-a-kind. The New Silk Road is not the only example of large-scale Chinese infrastructure that has raised eyebrows.

Entire cities built to house hundreds of thousands or millions of people sit nearly empty within its borders. Rows of vacant high rises line barren streets. The New South China Mall, considered the largest in the world in terms of leasable area, remains unoccupied. Tourists come to these cities, not to visit bustling fish markets, ride packed subways, or see the latest plays, but instead to witness the vast emptiness of an urban landscape built for no one.

Kai Caemmerer has photographed many of these desolate cityscapes. In an interview with him, BBC reported that he “thinks part of what makes these places seem so ‘weird’ is the speed with which they have been built. ‘Many of these cities are built on a scale that is somewhat unfamiliar to the methods of Western urbanization.’”

Cities throughout history have grown organically with natural increases in population. As families expand and generations pass, the number of buildings, roads, shops, bridges and schools increase in proportion.

China’s modern view of urban development flips this principle, following the notion that “if you build it, they will come.”

Spending billions and trillions of dollars to erect such metropolises is highly risky—there is no guarantee apartments, homes and businesses will be filled. However, China’s city planners believe it will eventually alleviate overpopulation in the nation’s larger cities, as well as help urbanize people living in rural areas. Both take time.

These “ghost cities” are evidence that China will devote vast sums of money and resources to an uncertain end, with hopes to produce large-scale returns in the future. This quality is what sets China apart from many other nations: a long-term focus and willingness to fail.

The One Belt and One Road initiative takes this unique ideology on infrastructure to an international and even global scale. While the risks are high, the potential gains are even higher.

What Is at Stake?

China stated at the Silk Road Summit in Beijing that its goal is to create “a new era of globalization.” The OBOR initiative includes two main routes—one by land and one by sea—that closely mimic the ancient paths. The plan involves 68 countries, 40 percent of the world’s GDP, and affects three out of every five people on Earth.

The global benefits could be massive. The World Economic Forum reported: “One strong incentive is that Trans-Eurasian trade infrastructure could bolster poorer countries to the south of China, as well as boost global trade. Domestic regions are also expected to benefit—especially the less-developed border regions in the west of the country, such as Xinjiang. The economic benefits, both domestically and abroad, are many, but perhaps the most obvious is that trading with new markets could go a long way towards keeping China’s national economy buoyant.”

But China will benefit the most in that it will have bragging rights for authoring and funding the largest global infrastructure project in history. Just this one reason, let alone all the other, makes it evident why Beijing would take on a risky $1 trillion project. Even if OBOR does not result in projected economic gains, at the very least, Beijing can claim real estate rights after spending billions of dollars to build infrastructure and provide jobs in Kyrgyzstan, Iran, Turkey, Russia, Poland, Germany, Italy, Sri Lanka, Singapore, Indonesia and many other nations.

Some nations are concerned that the New Silk Road initiative contains a hidden agenda. The business news outlet Quartz India reported that “nations wonder if hegemonistic designs are hidden behind the rationality of connectivity and trade. The policy initiative aims to enhance China’s centrality in the global economic unilateral approach. But how the project is conceived and implemented so far belies the rhetoric of multilateralism emanating from Beijing.”

In other words, some fear that China, by attaching strings to each nation, would create a broad network of allies, bolstering its economic and political influence through “soft colonialism.”

President Xi stated during the Communist party congress in 2017 that the nation is standing “tall and firm in the east.” As the One Belt, One Road initiative progresses, the passing of time will tell just how tall and firm China’s global authority will become.