This website requires the use of Javascript to function correctly. Performance and usage will suffer if it remains disabled.
How to Enable Javascript
Splintered Coalition Reflects Fate of Egypt’s Uprising a Decade On

Splintered Coalition Reflects Fate of Egypt’s Uprising a Decade On 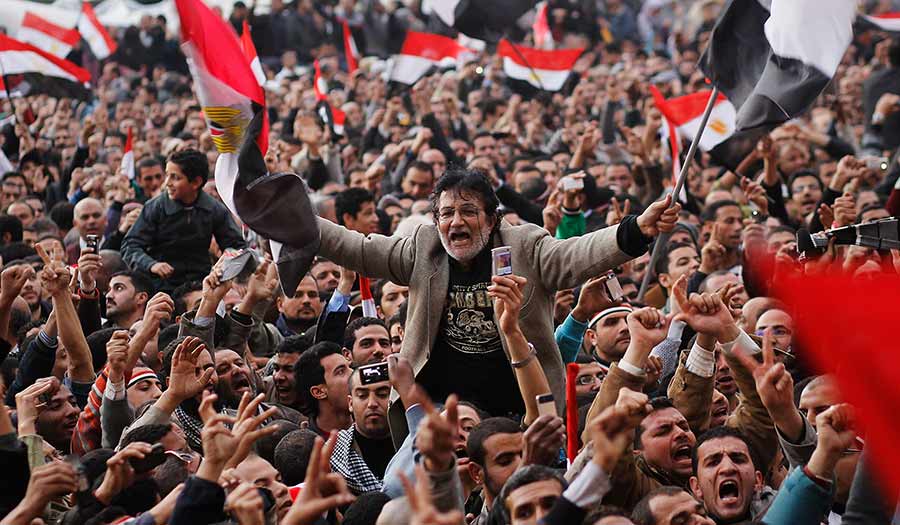 Chris Hondros/Getty Images
An anti-government protester is carried on shoulders in Tahrir Square before a speech by Egyptian President Hosni Mubarak in Cairo (Feb. 10, 2011). Amid a widespread uprising during the Arab Spring, Mubarak made a statement saying that he would not resign or leave the country, leaving a crowd of protesters furious after early reports he might step down.

Some young activists formed the Revolution Youth Coalition to draw together the uprising’s disparate strands and give the protesters occupying Cairo’s Tahrir Square a coherent voice.

They demanded freedom, dignity, democracy and social justice amid battles with police and state-hired thugs, and on February 11 President Hosni Mubarak resigned.

But the coalition fragmented as it faced two much more established forces: the Muslim Brotherhood that swept to power in later elections, and the military that toppled it in 2013.

Egypt now faces a different landscape. Abdel Fattah al-Sisi, who became president in 2014 after leading the overthrow of the Brotherhood’s Mohamed Morsi, has overseen a crackdown that activists call the harshest for decades.

Mr. Sisi says in response that he has brought stability, allowing the country to move on from the turmoil that followed 2011. He has referred to the uprising as a “great revolution” while blaming it for unleashing economic disruption and security problems. Tahrir Square has been redesigned, and a new capital is being built in the desert.

Some former leading members of the coalition are in prison, some are in exile. One is a pro-Sisi member of parliament. Here are some of their stories:

A senior member of the Muslim Brotherhood’s student division as the uprising started, Islam Lotfy was dismissed from the movement later that year as youth members split with the more hesitant senior leadership.

Mr. Lotfy, 42, left Egypt in 2013 amid a crackdown on those associated with the Brotherhood, and now works in television production from London.

Egypt has placed him on a terrorist list and frozen his assets. Many of his former political companions are in jail, he says.

“Personally we are in a difficult position but we will keep fighting,” he said. “My mother got dementia and she’s very old, and I didn’t get a chance to be beside her or to visit her.”

He is marking the 10th anniversary of the uprising by contacting fellow activists outside Egypt “and trying to build a real political movement.”

After the uprising he co-founded the Egyptian Social Democratic Party and was elected to a short-lived parliament. By June 2013 he was among the organizers of anti-Brotherhood protests.

His optimism at Morsi’s fall quickly turned to concern that civilians were being sidelined by the military.

Now 51, he remains deputy head of his party, which gained seven seats in parliament by joining an election list headed by a strongly pro-Sisi party. But he did not take a seat, dividing his time between party activities and the interior decoration company he owns in Cairo.

“There is no political life, really. There is a very, very limited margin for political or party activity, and in light of that I’m there,” he said during an interview at his office.

“Change must come from cumulative work and organization, long-term persistence.”

Doctor Sally Toma remembers being chased out of Tahrir Square on January 25, 2011, and watching in awe as protesters moved to reclaim it three days later.

A representative of Egypt’s Coptic Christians in the coalition, she continued protesting until 2013, campaigning against both the military and the Muslim Brotherhood.

“Agreeing to bring down a regime is one thing and then agreeing on how to build is another, and you had a counterrevolution working against you from the very start,” she said in an interview.

Now 42 and a practicing psychiatrist, she says most of her companions are in detention or exile and those who remain are trying to survive the trauma of the past decade.

An informal network from the “revolutionary camp” works discreetly on human rights issues, she says.

Dr. Toma says she still meets people who profess attachment to the uprising and its goals.

“Revolutions don’t just happen like that like and they die. Seeds are there and you find them in the strangest of places.”

Lawyer Tarek el-Khouly blames the Brotherhood for undermining the uprising by seeking to impose Islamic rule. He backed the overthrow of Morsi in 2013, seeing it as an extension and “correction” of 2011.

Khouly, 35, was re-elected last year to a second five-year term in parliament after joining the pro-Sisi Nation’s Future party.

“Ten years ago, I was among the thousands of young people who participated in this great revolution that called for bread, freedom and social justice. I believe that we are in the middle of the road,” he said in an interview.

Security measures post-2013 were needed to prevent militant attacks, and those jailed for social media posts were inciting crimes, he said.

Tens of thousands of civil society organization are allowed to operate in Egypt, he added, praising government efforts to improve living conditions and saying parliament was gaining strength as an expression of popular will.

A surgeon active in opposition politics before the uprising, Shady el-Ghazaly Harb was jailed from 2018-2020 on charges of spreading false news and joining a terrorist organization, accusations frequently leveled at opposition figures.

Mr. Harb, 42, believes he was arrested due to social media posts critical of government policies. He has returned to his Cairo clinic but remains suspended from a university teaching job.

The priority now is pressing to get detainees released. But he believes the uprising’s ideas have lived on, both in protests in Sudan, Algeria and Lebanon, and in Egypt itself.

“It changed the collective consciousness of a nation of 100 million,” he said. 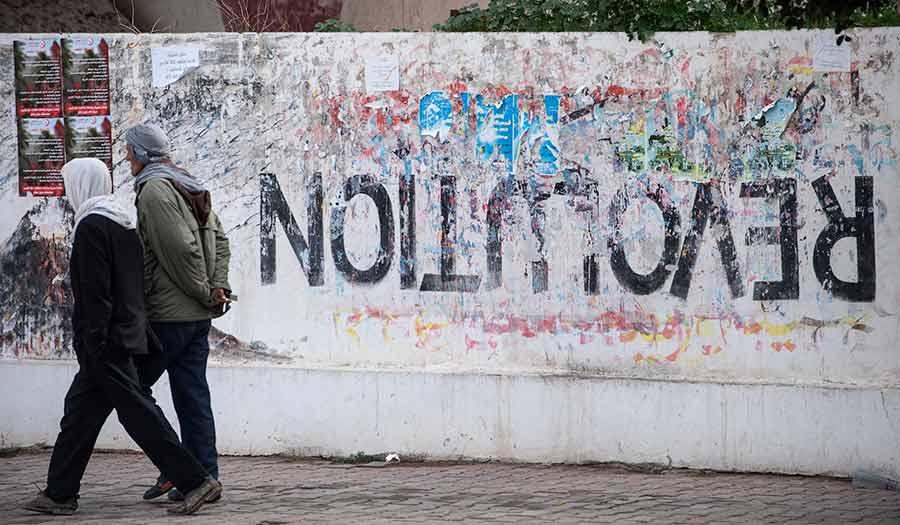 Tunisia Region at Heart of Arab Spring Still Waits to Reap Rewards
TUNIS, Tunisia (AP) – Tunisia on Thursday marked 10 years since a local fruit and vegetable seller set himself ablaze in protest after police took his cart, an act that enraged the country and snowballed into the revolution that toppled the North African nation’s autocratic leader months later and triggered the Arab Spring.