This website requires the use of Javascript to function correctly. Performance and usage will suffer if it remains disabled.
How to Enable Javascript
Freed Nigerian Schoolboys Return Home, Tell of Beatings and Hunger 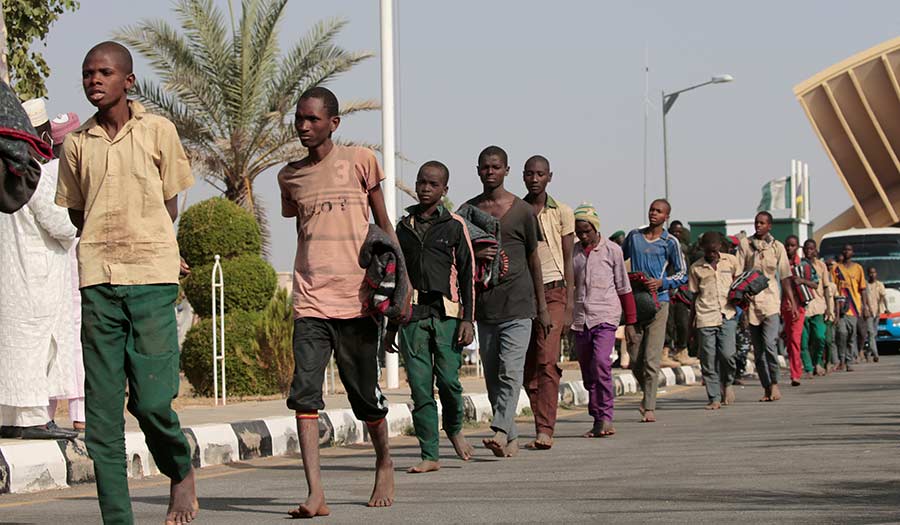 Reuters/Afolabi Sotunde
Freed Nigerian schoolboys walk after they were rescued by security forces in Katsina (Dec. 18, 2020).

KATSINA, Nigeria (Reuters) – Scores of schoolboys who were rescued from kidnappers in northwest Nigeria arrived back home on Friday, many of them barefoot and wrapped in blankets after their week-long ordeal.

The boys, dressed in dusty clothes, looked dazed and weary but otherwise well as they got off buses in the city of Katsina.

Within hours—before many had met their waiting parents—they were whisked to a reception with President Muhammadu Buhari, who had come under mounting pressure to free them and deal with insecurity in the north.

One boy, who did not give his name, said the captors had told him to describe them as members of the Islamist militant group Boko Haram, although he suspected they were armed bandits.

“They beat us morning, every night. We suffered a lot. They only gave us food once a day and water twice a day,” he told Nigeria’s Arise television.

Gunmen on motorbikes raided the boys’ boarding school in the town of Kankara in Katsina state a week ago and marched hundreds of them into a vast forest that spans four states.

Authorities said security services rescued them on Thursday. The army said it had acted on “credible intelligence” and freed all 344 kidnapped boys.

Many details surrounding the incident remain unclear, including who was responsible, why they kidnapped the boys, whether ransom was paid and how the release was secured.

The abduction gripped a country already incensed by widespread insecurity, and evoked memories of Boko Haram’s 2014 kidnapping of more than 270 schoolgirls in the northeastern town of Chibok.

Any Boko Haram involvement in this kidnapping would mark a geographical expansion in the militant group’s activities from its base in the northeast.

Tears of Joy, Prayers of Thanks

Hours before the rescue of the boys was announced on Thursday, a video started circulating online purportedly showing Boko Haram militants with some of the boys. Reuters was unable to verify the authenticity of the footage or who released it.

The rescued boy interviewed by Arise TV was one of those who had appeared in the online video.

“They said I should say they are Boko Haram and gangs of Abu Shekau,” he said, referring to a name used by a Boko Haram leader. “Sincerely speaking, they are not Boko Haram…They are just small and tiny, tiny boys with big guns.”

Another of the freed boys told Reuters that the kidnappers had initially taken them to a hiding place.

“But when they saw a jet fighter, they changed the location and hid us in a different place. They gave us food, but it was very little,” he said.

On Friday, the boys walked from the buses in single file, flanked by soldiers and armed police officers, and were taken to the government building to meet the governor. They were then brought back and driven off for medical checks, and then to the presidential meeting.

A group of parents waited to be reunited with them in a shaded parking lot in another part of town.

Hajiya Bilikisu, in a cream-coloured veil, said she had started to lose hope that she would ever see her son, Abdullahi Abdulrazak, again.

“I was just crying, crying with joy, when I saw them, my son” in pictures after the release, she told Reuters.

“They have to recovery psychologically,” she said. “They went through trauma. We have to try to counsel them, so they can now become normal persons.”

Hafsat Funtua, mother of 16-year-old Hamza Naziru, said she ran out of her house with joy “not knowing where to go” when she heard the news. She later returned home to pray.