This website requires the use of Javascript to function correctly. Performance and usage will suffer if it remains disabled.
How to Enable Javascript
UN Investigator on Belarus Warns of ‘Another Iron Curtain’

UN Investigator on Belarus Warns of ‘Another Iron Curtain’ 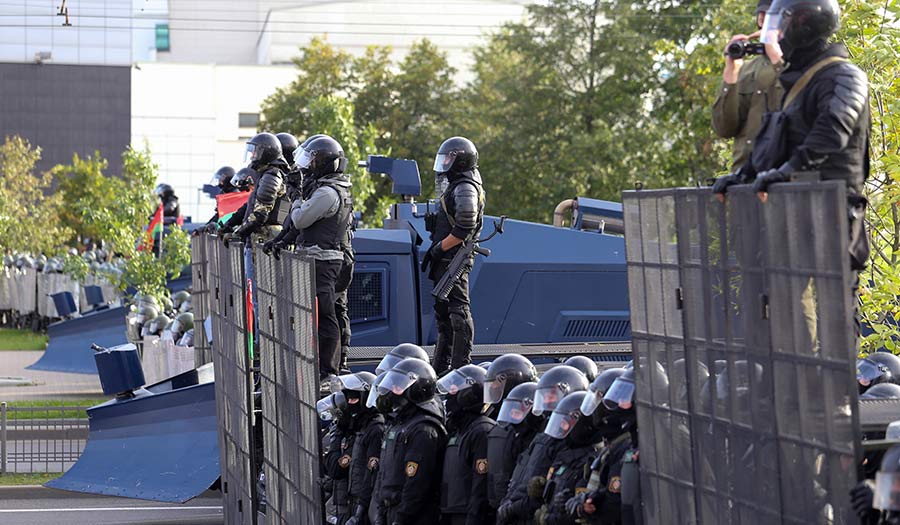 Tut.By via Reuters
Law enforcement officers block a road for opposition supporters during a rally against police brutality following protests to reject the presidential results in Minsk, Belarus (Sept. 13, 2020).

GENEVA (Reuters) – A UN investigator warned of the possibility of “another Iron curtain” descending in Europe during an urgent debate on the human rights situation in Belarus in Geneva on Friday.

The all-day talks, called by Germany on behalf of the European Union, was interrupted repeatedly by the delegations of Belarus, Russia, China and Venezuela raising procedural objections.

The UN Human Rights Council will consider a draft resolution that calls for UN rights chief Michelle Bachelet to monitor the crisis and report back by year-end, following what the bloc calls a “fraudulent election.”

Yury Ambrazevih, Belarus ambassador to the UN in Geneva, said it was not acceptable to use the body to interfere in a country’s election.

President Alexander Lukashenko, in power since 1994, denies rigging the August 9 election, which official results said he won by a landslide. He has cracked down hard on protesters demanding his resignation, the biggest threat to his rule.

“Let’s not allow another Iron curtain to descend on the European continent,” said Anais Marin, UN special rapporteur on the human rights situation in Belarus, describing a “catastrophic” situation in the country.

More than 10,000 people have been “abusively arrested,” with more than 500 reports of torture and thousands “savagely beaten,” Ms. Marin said. She called on authorities to release those still held on “politically-motivated charges” and for the charges to be dropped.

Ms. Marin’s speech was interrupted several times by objections from other UN members including Russian, Belarusian and other delegations who called a halt to her participation.

Belarus opposition leader Sviatlana Tsikhanouskaya, in a video message to the 47-member state forum, demanded that authorities end violence against protesters and set up a free and fair presidential election

“I once again emphasize our willingness to talk with the authorities and look for peaceful solution to the crisis that has affected our nation,” said Ms. Tskihanouskaya, who fled her homeland for Lithuania.

“We demand to immediately cease violence against peaceful citizens. We demand immediate release of all political prisoners,” she said.