This website requires the use of Javascript to function correctly. Performance and usage will suffer if it remains disabled.
How to Enable Javascript
Iowa Farmers Suffer Deep Losses After Rare Storm Flattens Fields 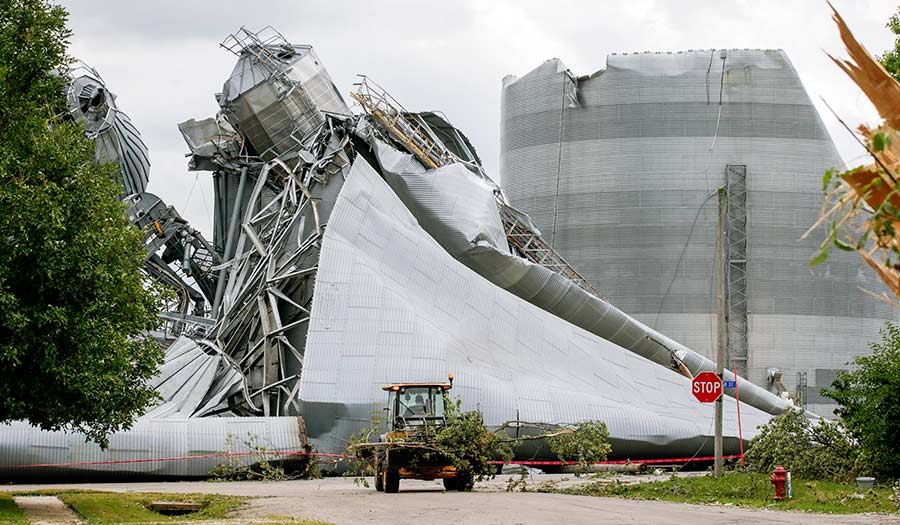 Farmers across a wide swath of Iowa are dealing with the heartbreaking aftermath of a rare wind storm that turned what was looking like a record corn crop into deep losses for many.

The storm, known as a derecho, slammed the Midwest with straight line winds of up to 100 miles per hour on Monday, gaining strength as it plowed through Iowa farm fields, flattening corn and bursting grain bins still filled with tens of millions of bushels of last year’s harvest.

Early estimates show that tens of millions of bushels worth of commercial grain storage—as well as millions of bushels of on-farm storage bins owned by producers—were either impacted, destroyed or severely damaged by the storm, Mr. Naig told a news conference.

Bin losses, ahead of this fall’s harvest, could leave some farmers scrambling to find storage for their crops, Mr. Naig said.

Before the storm hit, the U.S. Department of Agriculture had been expecting a record national corn crop this year of 15.3 billion bushels harvested from about 84 million acres. Iowa was to provide about 18 percent of that production.

Corn is a staple of Iowa’s agricultural economy. The state produced about 2.58 billion bushels of corn in 2019—or about 19 percent of all corn grown in the United States, according to U.S. Department of Agriculture data. The crop was valued at about $9.81 billion in 2019.

How much of the downed corn will be able to produce a viable crop this fall is unknown, and it is too early to put a total value on the damage to the crop and the state’s overall agricultural sector, Mr. Naig said.

But it is too late for farmers to try to replant, agronomists said, given that harvest typically begins in either September or October.

The storm packing hurricane-force winds tore across the U.S. Midwest caused widespread property damage in cities and rural towns. More than one million U.S. homes and businesses were still without power early on Tuesday.

According to a USDA report dated August 1, farmers in much of central and eastern Iowa had been expecting near-record yields with healthy plants that could bounce back. For now, much depends on whether the plants snapped off or were just bent over by wind.

“There’s a lot more breakage or pinching of stalks than I thought there was now that I’ve been out and looked at more of it. That, of course, essentially has killed the plant,” said Meaghan Anderson, an Iowa State University extension agronomist who works with farmers in nine central Iowa counties.

Corn is flat on the ground in numerous fields in the region. The corn stalks had grown to full height and were in the final stages of producing ears and filling them out with kernels. Modern corn varieties can grow up to 8 feet tall making them vulnerable to powerful straight line winds.

For plants that were bent, and stalks not broken, there is some hope, with a significantly reduced yield. But it will be difficult to harvest. If the stalks snapped, the plant will die. Those fields will be chopped and used as livestock feed.

There is no federal program to help farmers who lost stored grain. Some may have private insurance to help but most will likely wait to see if federal or state programs are initiated.