This website requires the use of Javascript to function correctly. Performance and usage will suffer if it remains disabled.
How to Enable Javascript
Argentines Battle Rising Poverty and Hunger, With or Without Debt Deal

Argentines Battle Rising Poverty and Hunger, With or Without Debt Deal 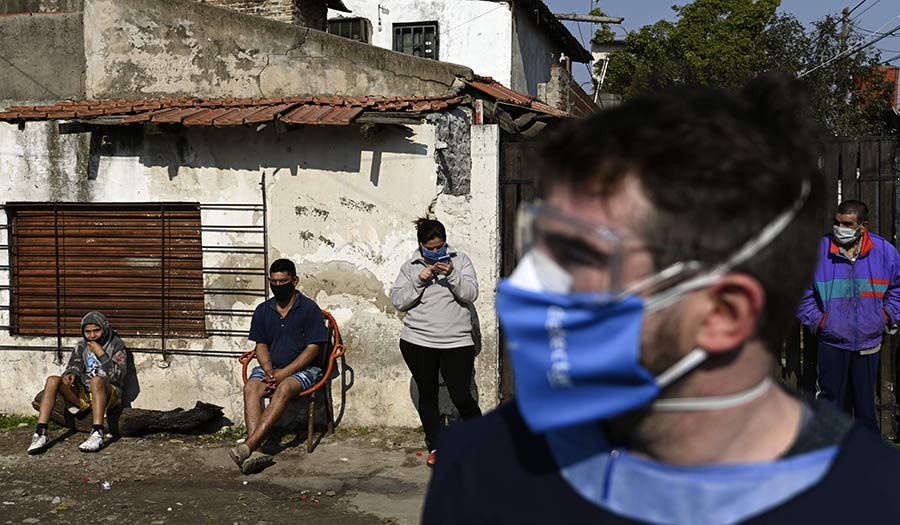 Juan Mabromata/AFP via Getty Images
Locals wait for health volunteers on a visit to detect people with symptoms of COVID-19 in Villa Fiorito, on the outskirts of Buneos Aires, Argentina (Aug. 3, 2020).

BUENOS AIRES (Reuters) – Silvia Puntano, a mother of seven from the poor Buenos Aires suburb of Villa Azul, these days has only one thing on her mind: where to find her next meal.

“Every day, I go from one community kitchen to another, I go there to look for food,” the 37-year-old said. “Other days I have to dig around and go outside [to ask] because even though I receive financial support, but it is not enough.”

Her life is a painful portrait of poverty in a country on the cusp of a $65 billion debt deal after economic crises triggered the country’s ninth sovereign default in May.

Poverty in Argentina is set to rise sharply this year due to the impact of the coronavirus pandemic, but the rate was already climbing amid a recession since 2018 and high inflation.

On Tuesday the government said it had a deal to restructure its foreign debt, which it says is vital to reviving growth and alleviating poverty. Experts say half the country’s population could be plunged into poverty this year.

“The situation is increasingly difficult because there are many people who come looking for a plate of food,” said Paola Carabajal, a cook from the capital’s Bernal district, who lost her job and now helps serve meals at a community kitchen.

“Most of the people who come are informal workers who were left without a fixed income for their families.”

Argentina’s minister for social development, Daniel Arroyo, told Reuters that the number of people seeking food aid at kitchens daily has risen to more than 11 million from 8 million before the pandemic hit.

“That is the emergency,” the minister said. Monthly spending on food aid has risen from 5 billion pesos to 14 billion Argentine pesos ($193 million), he said.

The Economic Commission for Latin America and the Caribbean expects Argentina to be one of the worst affected countries in the region this year in terms of poverty and job losses.

Eusebio Hernandez Greco, a pastor from the Cacupe church, said the parish kitchen now serves at least 180 meals a day, from 80 before the pandemic.

The capital and its surroundings are still under coronavirus lockdown measures first imposed in March.

Economist Juan Manuel Palacios said the debt deal would not solve the issue of poverty, but might help avoid the worst-case scenario.

“Does the debt agreement imply that economic problems are solved? No, not at all,” he said. “However, with an indefinite default we were sure to explode.”