This website requires the use of Javascript to function correctly. Performance and usage will suffer if it remains disabled.
How to Enable Javascript
At Least 126 Killed as Myanmar Jade Mine Collapse Buries Workers

At Least 126 Killed as Myanmar Jade Mine Collapse Buries Workers 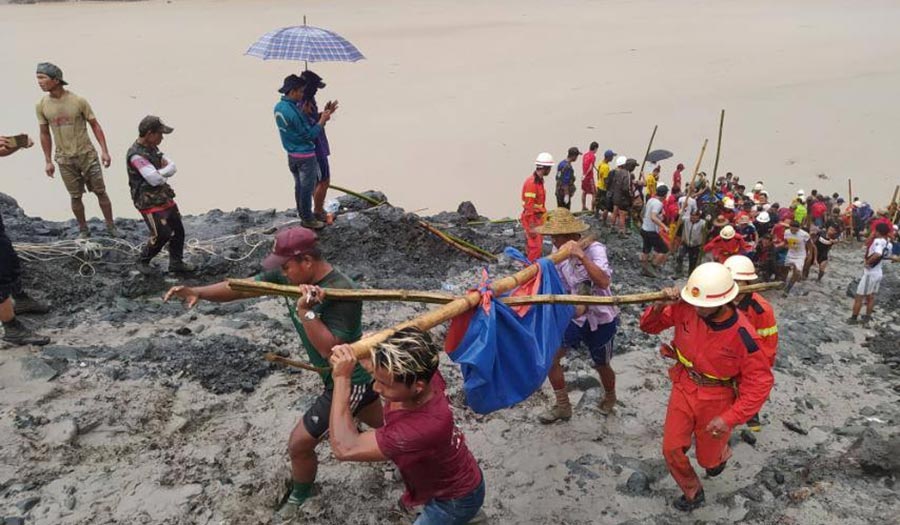 A landslide at a jade mine in northern Myanmar killed at least 126 people, with more feared dead, authorities said on Thursday, after a heap of mining waste collapsed into a lake and buried many workers under mud and water.

The miners were collecting stones in the jade-rich Hpakant area of Kachin state—the center of Myanmar’s secretive jade industry, which generated about $31 billion in 2014—when the “muddy wave” crashed onto them, after heavy rain, the fire service department said in a Facebook post.

By late afternoon rescue workers had recovered 126 bodies, the department said, but more were missing.

“Other bodies are in the mud,” Tar Lin Maung, a local official with the information ministry, told Reuters by phone. “The numbers are going to rise.”

Deadly landslides and other accidents are common in the poorly regulated mines of Hpakant, which draw impoverished workers from across Myanmar in search of gems mostly for export to China. But Thursday’s accident was the worst in over five years.

About 100 people were killed in a 2015 collapse which strengthened calls to regulate the industry. Another 50 died in 2019.

Many of those killed are freelance “jade pickers” who scour tailings—the residue from mining—for gemstones overlooked by larger operators. One good piece of jade, worth tens of thousands of dollars, could transform their lives.

The London-based environmental watchdog Global Witness said the accident is an “indictment of the government’s failure to curb reckless and irresponsible mining practices in Kachin state’s jade mines.”

“The government should immediately suspend large-scale, illegal and dangerous mining in Hpakant and ensure companies that engage in these practices are no longer able to operate,” it said in a statement.

At the site of the tragedy, a crowd gathered in the rain around corpses shrouded in blue and red plastic sheets placed in a row on the ground.

Emergency workers had to slog through heavy mud to retrieve bodies by wrapping them in the plastic sheets, which were then hung on crossed wooden poles shouldered by the recovery teams.

Those killed in such accidents are usually freelance miners who settle near giant mounds of discarded earth that has been excavated by heavy machinery. The freelancers who scavenge for bits of jade usually work and live in abandoned mining pits at the base of the mounds of earth, which become particularly unstable during the rainy season.

Most scavengers are unregistered migrants from other areas, making it hard to determine exactly how many people are actually missing after such accidents and in many cases leaving the relatives of the dead in their home villages unaware of their fate.

Khin Maung Myint, a lawmaker from Hpakant, earlier said that in addition to the dead, 54 other people were injured and sent to hospitals. An unknown number of people were feared missing.

Social activists have complained that the profitability of jade mining has led businesses and the government to neglect enforcement of already very weak regulations in the jade mining industry.

“The multi-billion dollar sector is dominated by powerful military-linked companies, armed groups and cronies that have been allowed to operate without effective social and environmental controls for years,” Global Witness said. Although the military is no longer directly in power in Myanmar, it is still a major force in government and exercises authority in remote regions.

Jade mining also plays a role in the decades-old struggle of ethnic minority groups in Myanmar’s borderlands to take more control of their own destiny.

The area where members of the Kachin minority are dominant is poverty stricken despite hosting lucrative deposits of rubies as well as jade.

The Kachin believe they are not getting a fair share of the profits from deals that the central government makes with mining companies.

Kachin guerrillas have engaged in intermittent but occasionally heavy combat with government troops.