This website requires the use of Javascript to function correctly. Performance and usage will suffer if it remains disabled.
How to Enable Javascript
U.S. Heads into a New Week Shaken by Violence as Cities Smolder

U.S. Heads into a New Week Shaken by Violence as Cities Smolder 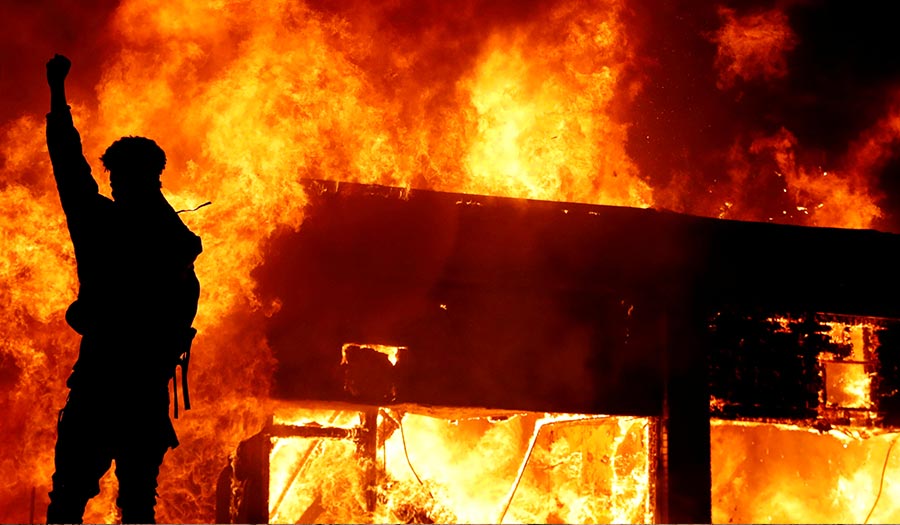 Reuters/Lucas Jackson
A protester gestures in front of a fire during a demonstration in Minneapolis, Minnesota (May 30, 2020).

WASHINGTON (Reuters) – U.S. President Donald Trump was scheduled to meet with his top law enforcement officer behind closed doors on Monday as cities nationwide awoke from a smoldering weekend of violent protests over race and policing in the midst of the coronavirus pandemic.

Chaotic demonstrations from Washington, D.C., to Los Angeles swelled from peaceful protests—sparked by the death of a black man, George Floyd, in Minneapolis police custody last Monday—into scenes of violence that drew National Guard troops in at least 15 states and Washington.

Dozens of cities across the United States faced curfews at a level not seen since the riots following the 1968 assassination of civil rights activist Martin Luther King Jr. as fires burned near the White House and stores were looted in New York City and other major cities.

Floyd’s death is the latest in a string of similar incidents involving unarmed black men in recent years that has raised an outcry over excessive police force and racism, and re-ignited outrage across a starkly politically and racially divided country just months before the November 3 presidential election.

Video footage has shown a white Minneapolis police officer kneeling on the neck of Floyd, 46, for nearly nine minutes before he died on May 25.

Mr. Trump has made no major public statement to address the growing crisis. He has threatened to utilize the U.S. military, but his national security adviser on Sunday said the administration would not yet invoke federal control over the National Guard.

The Republican president was scheduled to hold a call with governors, law enforcement and national security officials later on Monday following his Oval Office meeting with Attorney General Bill Barr.

Washington and other cities had been set to restart some normal economic activity over the weekend after more than two months of stay-at-home orders aimed at stemming the novel coronavirus outbreak, which has killed nearly 103,000 people nationwide and plunged more than 40 million people into joblessness.

Many states had already activated National Guard troops to help manage the pandemic, further straining local budgets with no immediate sign of relief from Congress as many weary Americans, particularly in urban areas, remain sheltered.

The demonstrations brought out a diversity of people in Boston, Chicago, Philadelphia and Portland, Oregon, among other cities, and have spread around the globe with demonstrations in New Zealand on Monday following events in London and elsewhere.

Hundreds of store fronts were smashed and buildings vandalized in multiple cities as protesters and police clashed. But the mayor of St. Paul, which is adjacent to Minneapolis, told CNN on Monday that thousands had gathered there peacefully on Sunday. Other cities also saw more peaceful demonstrations, sometimes with police support.

The arrest of former Minneapolis police officer, Derek Chauvin, who was charged with third-degree murder in Floyd’s case, has not quelled the demonstrations amid calls for the other three officers involved to also be charged.

Public health experts and local officials have also expressed concern the gatherings could trigger more cases of COVID-19, the highly transmissible and potentially deadly infection tied to the coronavirus.

Can America Erase Racism?
We tried to remove it in the years following the Civil War. We dreamed it would go away during the civil rights movement of the 1960s. Yet we still grapple with racism today.