This website requires the use of Javascript to function correctly. Performance and usage will suffer if it remains disabled.
How to Enable Javascript
Can America Erase Racism?

We tried to remove it in the years following the Civil War. We dreamed it would go away during the civil rights movement of the 1960s. Yet we still grapple with racism today. 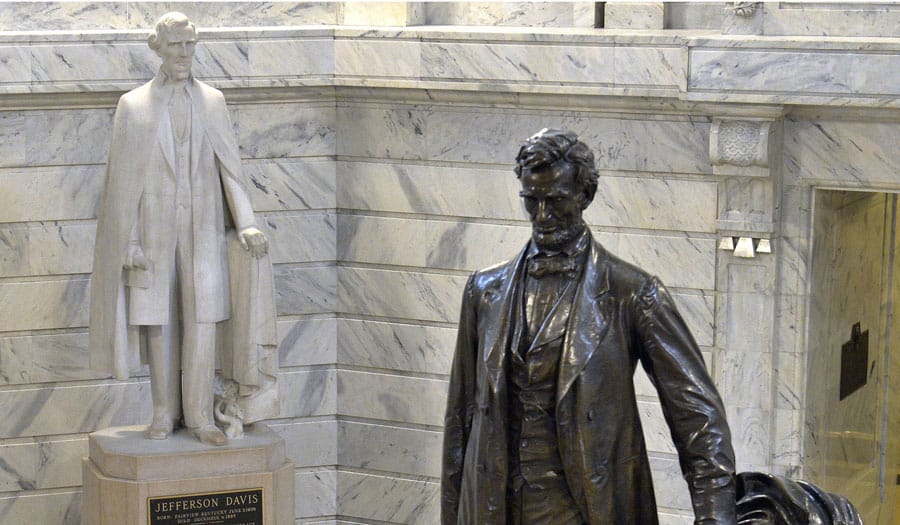 AP/Timothy D. Easley
Warring presidents: A statue of Jefferson Davis, the only Confederate president, faces a likeness of Abraham Lincoln in the Rotunda of the Kentucky State Capitol in Frankfort.

Musician Bobby Horton, 66, has an unusual vantage point on the debates that have roiled American cities in recent months. He has spent a lifetime studying and playing historically significant music and was among the contributors to director Ken Burns’ landmark 1990 miniseries “The Civil War.”

Both the Yankees and Confederates had their favorite tunes during the war, Mr. Horton said, and that division continued with post-war songs such as “Oh, I’m a Good Ole Rebel…”

Yet a new type of music also emerged after the war, Mr. Horton said. Songs that talked about reconciliation and coming together after years of fighting. One, titled “The Dawn of Peace,” included the verse: “No more, no more shall war and strife be heard throughout the land.”

More than a century and a half after those lyrics were first sung, chants at civil rights rallies hardly evoke the utopian sentiment of “The Dawn of Peace.” Much less do protesters beating each other with clubs and sticks on the streets, hurling bottles of frozen water like bricks at one another’s skulls, or using makeshift aerosol-can flame throwers, as happened in Charlottesville, Virginia, over the summer.

The event turned deadly when a man rammed a Dodge Charger through demonstrators, hurting several and killing a woman.

Meanwhile, calls for removal of Confederate memorials, the reason protesters gathered in Charlottesville in the first place, have grown louder. Those in favor of keeping them defend the monuments, saying they serve as historical reminders. Their counterparts argue they stand as a testimony to hatred.

A poll by MSN accentuated the deep political divide on the subject: “Seventy-one percent of Democrats surveyed in the poll said they supported the removal of Confederate monuments, while 87% of Republican respondents disagreed…In the poll, Republicans and Democrats also disagreed over how to handle the flying of the Confederate flag in public spaces. Seventeen percent of Democrats said they believe Confederate flags are ‘too symbolic of hate’ and should be taken down, but 78% of Republicans said they supported leaving them up to respect their historical significance,” Business Insider reported.

The ongoing debate over race equality, however, has resulted in more violent protests and statues removed.

Over the last few years, individuals, groups and corporations have joined the effort to shun anything that can be seen as racially offensive.

In Memphis, Tennessee, the Orpheum Theatre canceled a long-running screening of “Gone With the Wind” because of what is considered racially insensitive content in the classic 1939 film. Theater president Brett Batterson said in a statement that “the Orpheum cannot show a film that is insensitive to a large segment of its local population.”

At Fenway Park in Boston, Massachusetts, four fans were removed after draping a huge sign that read: “Racism is as American as Baseball” over the left-field wall.

Earlier in the season, Orioles center fielder Adam Jones reported hearing racial slurs and having peanuts thrown at him during a game. Mr. Jones received a personal apology from Boston team president Sam Kennedy a day later on behalf of the club. When he stepped up for his first at-bat of the game, he was given extended applause from the Fenway crowd.

Tech companies are also putting forth efforts to banish extremism. Facebook removed several groups and individuals from its service and Instagram for what it calls violations of its terms that ban hate speech. Google removed Gab, a social network favored by extremists, for “hate speech,” Gab tweeted. Music streaming service Spotify banned music it said “favors hatred or incites violence against race, religion, sexuality or the like.”

Historians and political scientists have been warning that American politics could once again become a pressure cooker, full of racial tension and building to the point of a deadly clash.

More and more voices say something must change, and soon.

“In 1861 they came to the point they could no longer talk about their differences. It came to bloodshed,” said long-haul trucker R.J. Yong, 37, of York, South Carolina. “I fear that we are coming to that point again.”

In a Guardian piece titled “‘The Civil War lies on us like a sleeping dragon’: America’s deadly divide—and why it has returned,” historian David Blight remarked: “Lincoln did not fear foreign enemies. If ‘danger’ would ‘ever reach us’, he said, ‘it must spring up amongst us. It cannot come from abroad. If destruction be our lot, we must ourselves be its author and finisher…’ Those words were prescient in Lincoln’s own century. But they have a frightful clarity even today. Where are we now?”

The same question looms in the minds of American leaders, who are at a loss for an answer. If you are reading this, perhaps you have wondered too. Why does eradicating racism seem such an unapproachable goal?

Ever since the end of the Civil War, the U.S. has tried and failed to eradicate racism. Following the surrender at Appomattox in 1865 came the period known as The Reconstruction.

“Under the First Military Reconstruction Act of March 1867, a Republican-controlled Congress, having become justifiably concerned about profound legal and extra-legal threats to the statutory civil rights of black Southerners, gave the U.S. Army an administrative deadline of September 1 to directly register all black and white adult males in 10 of the 11 ex-Confederate states (Tennessee, the 11th, already had a biracial electorate),” progressive magazine The American Prospect stated.

At best, the publication continued, the new system was “flawed”: “Americans have been arguing about Reconstruction ever since…The ratification of the 14th Amendment expressly kept all women from voting. Native Americans and Chinese Americans in California soon discovered that the new constitutional amendments—the 13th, 14th, and 15th—did not quite include them (at least not without arduous litigation in the federal courts).”

About a century later: “The broad period from the end of World War II until the late 1960s, often referred to as the ‘Second Reconstruction, consisted of a grass-roots civil rights movement coupled with gradual but progressive actions by the Presidents, the federal courts, and Congress to provide full political rights for African Americans and to begin to redress longstanding economic and social inequities” (History.house.gov).

There are some who feel a Third Reconstruction is happening today. Yet, if every single thing that could be considered offensive were removed, would it be enough? Is there real hope that America’s race struggles will one day be resolved once and for all?

What Is to Blame?

Each time racially motivated violence takes place, leaders, organizations and opinion writers scramble to identify a cause, and sometimes propose what they view as a lasting solution. Racial problems, however, are an effect. A fourth, fifth, or sixth “reconstruction” are guaranteed should we never address this core cause.

Back in 2015, the Washington Post raised concerns about the deep-rooted nature of racial division.

“The United States has been treating evidence of racism, and not the causes, since the Civil War,” the newspaper stated.

“Slavery; ‘separate but equal’; segregated pools, buses, trains and water fountains; workplace and housing discrimination; and other forms of bias and animus have served as painful barometers of the nation’s racial health. They have been, however, treated like the pain that accompanies a broken leg. The effort was to treat or reduce the agonizing symptoms of the break rather than fix it.

“The 13th, 14th and 15th amendments to the Constitution extended civil and legal protections to former slaves. They eased the pain, but the leg was still broken. Anti-lynching laws scattered the lynch mobs. But the pain flared up again with beatings, bombings and assassinations.”

The article concluded: “Until we get at the root cause, the problem lives on.”

Again, what is the root cause? Can someone define it? Who or what is to blame in today’s worsening racial struggles?

In a letter to his mother, a young officer during the Civil War wrote: “I have learned a great many things, a great deal of human nature” (Forged In Battle – The Civil War Alliance of Black Soldiers and White Officers).

War certainly does test the mettle of men. It can reveal courage and selflessness, but it also exposes the horrors of human nature.

Take an honest look at mankind. Human nature is not exclusive to the battlefield. It is ever with us—as is the tendency toward bigotry and hatred.

Recall Lincoln’s words about America—that our downfall “must spring up amongst us. It cannot come from abroad. If destruction be our lot, we must ourselves be its author and finisher…’

In this statement, Lincoln was drawing from principles found in an ancient book with which he knew well: the Bible.

This book has much to say about human nature. In Matthew 15:19, it warns that evil thoughts, murder and the like proceed “out of the heart.” They come from within.

Understand what this means. Human nature is the force behind all racial divisions! Address human nature, and you will address all forms of racism. The natural state of mankind is the ultimate culprit for a discriminatory society.

Yet to eradicate racism in America, we must understand exactly what is human nature, and how to fight it. Only then will the words in “The Dawn of Peace” become a reality: “No more, no more shall war and strife be heard throughout the land.”

For more on the natural state of mankind—what it is, why it exists, and where it comes from—read Did God Create Human Nature?