This website requires the use of Javascript to function correctly. Performance and usage will suffer if it remains disabled.
How to Enable Javascript
Colombia Makes Biggest Drug Bust in Its History 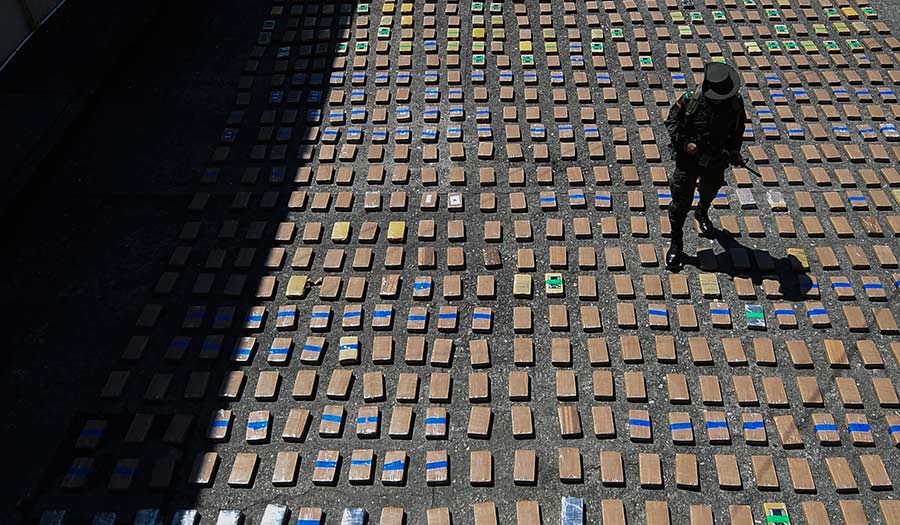 Raul Arboleda/AFP/Getty Images
A member of the Colombian antinarcotics police stands beside a one-ton shipment of cocaine seized in Buenaventura, Colombia (Aug. 10, 2017). In the November seizure, authorities found more than 13 tons of the drug, the largest bust in the nation’s history.

Colombia seized the largest amount of cocaine in the country’s history—13.4 tons worth $360 million dollars—from a farm northwest of Medellin, according to Colombian officials.

“Never before, since we began fighting against drugs more than 40 years ago, have we had a seizure of this size, of more than 12 tons of cocaine,” Colombian President Juan Manuel Santos announced during a press conference, with packets of confiscated drugs laid in rows by the hundreds behind him.

The drugs were taken from the Clan of the Gulf, which is considered the most powerful neo-paramilitary groups in the nation.

According to Mr. Santos, the Colombian government has seized 15 percent more drugs this year than last year, with the amount seized going from 317 tons last year to 362 tons this year, Colombian daily Semana reported.

The nation, however, is still struggling to stop the amount of coca plants used to produce cocaine from growing within its borders.

According to NPR, “Colombia has seen a large spike in its cocaine production as a peace process has taken hold in recent years. To try to control that growth, Colombia has used cash incentives to get farmers to plant other crops. The government has also stepped up eradication efforts—as of this week, Defense Minister Luis Carlos Villegas said the government had forcibly eradicated 44,000 hectares (more than 108,000 acres) of illicit crops.”

The Washington Post reported that the peace treaty by the Revolutionary Armed Forces of Colombia (FARC) and the Colombian government signed in 2016 was designed “to end their 52-year war committed the guerrillas to quit the narcotics business and help rural families switch to legal crops,” but it has instead has adverse effects such creating “a perverse incentive for farmers to stuff their fields with as many illegal plants as possible.”

“The result,” continued the media outlet, “is a cocaine market so saturated that prices have crashed and unpicked coca leaves are rotting in the fields, according to Luis Carlos Villegas, Colombia’s defense minister. ‘We’ve never seen anything like it before,’ he said.

“He and other top officials concede that the end of the war with the FARC…has made the drug fight more difficult, not less. The days when U.S.-funded aircraft could douse coca plantations with herbicide are over. A problem that could once be attacked with blunt military force has morphed into a sociological, state-building challenge.”

While Colombia is at peace, cocaine has been flowing into the U.S., causing a boom in the use of the product. Data from the combined 2014-2015 National Surveys on Drug Health showed that “1 out of every 20 young adults across the nation using cocaine in the past year” (the latest data available).

The Substance Abuse and Mental Health Services Administration’s Office of National Drug Control Policy estimated that the “potential cocaine production from Colombia was 420 metric tons in 2015, which is the highest level of Colombian cocaine production since 2007 and an increase of more than 100 percent compared with 2013.”

U.S. institutions, such as the Coast Guard, are having a hard time keeping up.

In April 2017, Business Insider reported that the Coast Guard, which prioritizes protecting the United States southern borders, including from drug trafficking rings, only confronts a third of the drug shipments that arrive in the country.

“We have good intelligence on between 80% and 90% of these movements,” the Coast Guard’s Deputy commandant for operation, Vice Admiral Charles Ray said, referring to trafficking in the eastern Pacific Ocean and Caribbean. But “we only have the capacity to get after about 30% of those” shipments.