This website requires the use of Javascript to function correctly. Performance and usage will suffer if it remains disabled.
How to Enable Javascript
Worst in Europe: Up to 25,000 Islamist Extremists Living in UK

Worst in Europe: Up to 25,000 Islamist Extremists Living in UK 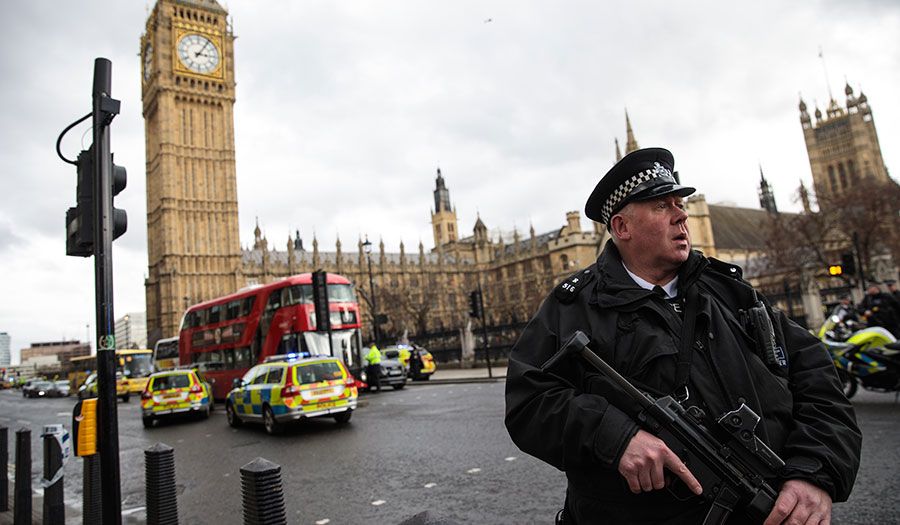 On watch: An armed officer attends to the scene of a terrorist attack outside the Houses of Parliament in London, England. An Islamist extremist injured more than 50 pedestrians, killing four, by driving his car into a crowd on Westminster Bridge. He then fataly stabbed a police officer before being gunned down by law enforcement officials (March 22, 2017).

The United Kingdom’s security is at risk as between 20,000 and 25,000 Islamist radicals live within its borders, according to the European Union’s counter-terror coordinator Gilles de Kerchove.

This figure, which is the highest known number of Islamist extremists in any European country, includes those who have been imprisoned, featured in investigations, or provided funds to extremist groups within the past 10 years.

While this group poses security risks, only 3,000 are considered a direct threat by British intelligence agency M15 and 500 are under constant surveillance.

According to The Independent, “Among those known to security services but not considered an imminent danger were the perpetrators of the three Isis-linked terror attacks that have killed 35 victims in Britain this year.”

Rafaello Pantucci, director of International Security Studies at the Royal United Services Institute, found this fact troubling and attributed it to a trend that law enforcement and counter-terror officials are increasingly facing. He told the British news outlet that terrorists are “becoming very isolated—they’re not talking to people about what they’re doing.”

“The flash to bang is really short. They decide to do something and a week later they do it.

“And people aren’t necessarily using bombs, they’re using knives and cars and everyday items…so where is the trigger to escalate attention from the security services?”

Top EU terror official Mr. de Kerchove told Spanish newspaper El Mundo: “The majority [of attacks], except Brussels and Paris, were not directed from Raqqa [the de facto capital of the Islamic State terror group] but inspired, and then ISIS claimed responsibility.”

“The group’s propaganda no longer calls so much for people to travel to the ‘caliphate,’ but to launch attacks in their places of origin or of residence, even on a small scale with homemade weapons.”

There is also concern over 300 British jihadis who have returned from former Islamic State territories in Syria and Iraq. While these are considered significant security threats, Mr. de Kerchove explained that they have not committed illegal acts and are therefore not technically terrorists. He told El Mundo: “Being radical is not a crime. Being orthodox, aggressive toward the West in your rhetoric is not a crime.”

Mr. de Kerchove also warned that if former militants were imprisoned without strong evidence that they have committed terroristic acts they “will reinforce their beliefs and leave [prison] even more furious with the West.”

Given the difficulties law enforcement have in the fight against terrorism and the large number of Islamist extremists, the official surmised, “We are going to suffer more attacks.”

Read “Can Europe Stop Terrorism?” and our two-part interview with a terrorism expert “Why Stopping Terrorism Is Harder than You Think” for deeper analysis.