This website requires the use of Javascript to function correctly. Performance and usage will suffer if it remains disabled.
How to Enable Javascript
Al-Qaida Will Pursue Attacks Undeterred by Zawahiri Loss, Experts Say 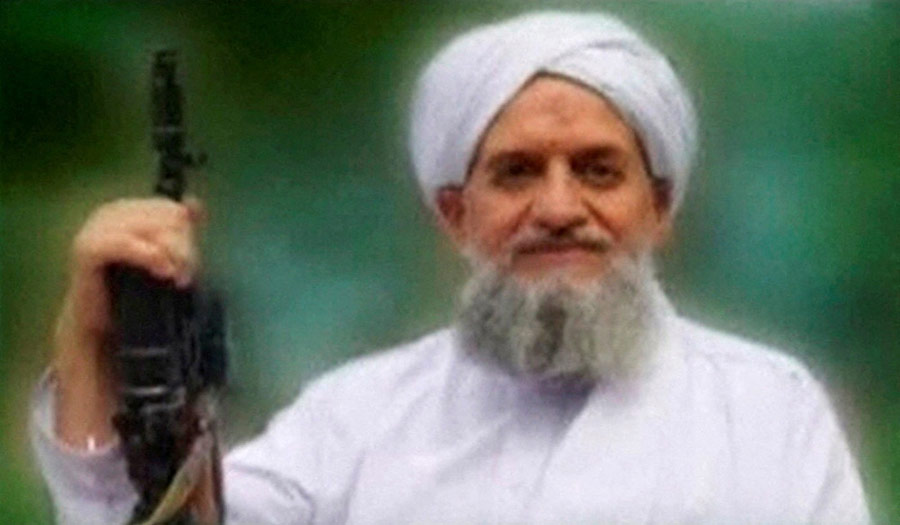 SITE Monitoring Service/Handout via Reuters TV
A photo of al-Qaida’s leader, Egyptian Ayman al-Zawahiri, is seen in this still image taken from a video (Sept. 12, 2011).

DUBAI/BAGHDAD (Reuters) – The U.S. Hellfire missiles that killed Ayman al-Zawahiri dealt al-Qaida a powerful symbolic blow, but its far-flung branches are tactically independent and will not be deterred from plotting more attacks on local and Western targets, experts say.

On his watch, which began with the 2011 death of Osama bin Laden, al-Qaida’s original driving force, the group often lost ground to Islamic State in a contest for relevance, especially among young jihadis lured by the newer group’s self-proclaimed caliphate.

Handicapped by a reputation for inflexibility and small-mindedness and not widely popular, Zawahiri could not match bin Laden’s flair for reaching out from al-Qaida’s hideouts in south Asia to forge bonds with like-minded groups around the globe.

But as a vastly experienced figurehead who spoke regularly online to sympathizers, Zawahiri was important in signaling the group’s continuing global ambitions, the experts say.

“Zawahiri’s presence meant the continuation of an actual organization, and he was very symbolic,” said H.A. Hellyer, a scholar at the Carnegie Endowment for International Peace.

“But the major question will be, who can fill that void for the group, especially in a world where groups like the Taliban are more powerful, to say nothing of ISIS [Islamic State]?”

Few potential replacements can match Zawahiri’s decades-long record as a jihadi. He used his prestige as a veteran militant to help rebuild al Qaeda in the face of a U.S. onslaught following the September 11, 2001, attacks on the United States.

But analysts say the identity of the top man has become less relevant, because tactically independent al-Qaida franchises run the day to day operations in their countries.

The main contender, experts say, is Saif al-Adel. The mysterious former Egyptian special forces officer was widely regarded as al-Qaida’s number 3 and one of its military chiefs.

His jihadist resume dates back to 1981, when he along with Zawahiri was suspected of involvement in the assassination of Egyptian President Anwar Sadat after he signed a peace treaty with Israel.

Adel helped to plan the bomb attacks against the American embassies in Nairobi and Dar as Salaam in 1998 and set up training camps for the organization in Sudan, Pakistan and Afghanistan in the 1990s.

Also in the running is Yezid Mebarek, known as Abu Ubaydah Yusuf al-Anabi, who succeeded as emir of al-Qaida in the Islamic Maghreb in 2020 when a French raid killed his predecessor.

Moroccan-born national Abd al-Rahman al-Maghrebi is another contender, some experts say. He studied software programming in Germany before moving to Afghanistan where he was selected to manage al-Qaida’s main media wing, said the FBI, which wants him for questioning in connection with his al-Qaida membership. The son-in-law of Zawahiri, he is a senior al-Qaida leader.

Al-Qaida has faced setbacks since it carried out the 9/11 attacks, including U.S. military pressure and competition from Islamic State, which ruled over vast areas in Iraq and Syria.

It consists of a Shura Council of key veterans and leaders of franchises, and then there is an executive committee that resolves internal issues, said Jerome Drevon, Senior analyst on Jihad and Modern Conflict at the International Crisis Group.

Al-Qaida’s general command consists of senior leaders who represent a new generation of leaders with no historical ties to Afghanistan, where militants fought Soviet occupation troops.

Aaron Zelin of the Washington Institute said that al-Qaida’s top leaders, scattered across the Middle East, South Asia and Africa, would share the burden of leading the group through its various branches.

He said Zawahiri’s death had left a “legitimacy” gap at the top of al-Qaida. “But at the same time I don’t think it will really affect the day to day of the branches and what they’re attempting to do in their operations,” he added.

“They already were doing their own [decisions] essentially on a day to day basis and only getting high level strategic directives from the senior leadership [which was] not micromanaging what was going on.”

It remains to be seen whether the affiliates, whose leaders communicate through couriers to avoid detection, will now seek a stronger role in the official leadership structure.

One group linked to al-Qaida is Somalia’s Al Shabaab, which has carried out bombings and attacks at home and has killed hundreds of civilians in Kenya and Uganda.

Its insurgency has grown in reach and financial clout after three years in which the previous Somali administration largely abandoned action against it due to political infighting.

Elsewhere in Africa, militants linked to al-Qaida have repeatedly launched raids across Mali during a decade-long insurgency concentrated in the country’s north and center.

In Yemen, al-Qaida in the Arabian Peninsula (AQAP) has used a seven-year-old conflict between the Iran-aligned Houthis and the Saudi-backed coalition to increase its influence.

It has survived attacks over the last decade from the U.S. military, the coalition and Houthis, taking advantage of Yemen’s mayhem, tribal sympathies and empty swaths of the south.

“There are always new figureheads waiting to fill the shoes of eliminated leaders,” said Elisabeth Kendall, a jihad expert at Oxford University. “Al-Qaida as an idea and a brand is likely to endure. The threat can be managed but never fully defeated.”