This website requires the use of Javascript to function correctly. Performance and usage will suffer if it remains disabled.
How to Enable Javascript
New Zealand Earthquake Catches Scientists Off Guard 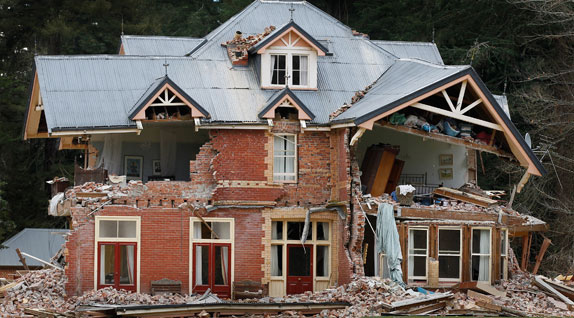 Joseph Johnson/Getty Images
Devastation: The historical Deans homestead in Canterbury, not far from the quake's epicenter, was destroyed.

The magnitude 7.1 earthquake that struck New Zealand on September 4, 2010, which left thousands of inhabitants without power and severely damaged at least 500 buildings, resulted in $1.4 billion in damages.

Kurt Langer/Getty Images
Devastation: Building rubble is strewn across a street after a 7.1-magnitude earthquake struck the area near the city of Christchurch.

Scientists place the quake among the 10 strongest ever recorded in the nation and the most powerful in 80 years. In some locations, it moved the earth 11 feet, demolishing roads, houses and buildings.

One survivor told the Telegraph, “It was like a giant hand had picked up our house and was just shaking it, shaking and shaking.”

The temblor, which was caused by the Pacific and Australian tectonic plates colliding, occurred on a previously undiscovered fault line.

According to geologist Tim Davies, associate professor at the University of Canterbury, “The fault that ruptured causing the shake was previously unknown. A fault beneath the Canterbury Plains capable of generating an earthquake of that size is a major surprise.”