This website requires the use of Javascript to function correctly. Performance and usage will suffer if it remains disabled.
How to Enable Javascript
Iran Declares Itself a Nuclear State

Iran Declares Itself a Nuclear State 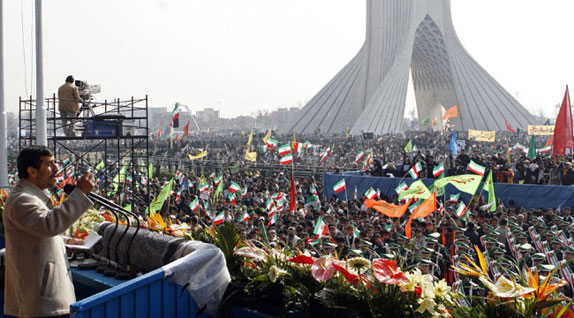 Weeks of Internet chatter, calls for stricter sanctions on Iran, and Iranian President Mahmoud Ahmadinejad declaring that something was going to happen on February 11 led to one pronouncement on the 31st anniversary of the Islamic Republic: Iran was now a “nuclear state.”

“I want to announce with a loud voice here that the first consignment of 20 percent enriched uranium was produced and was put at the disposal of the scientists,” he said to a gathering of thousands waving flags and banners to demonstrate their support.

Iran, the world’s fifth largest oil exporter, has consistently claimed it is committed to the peaceful use of nuclear technology while denying enriching uranium for weapons. It maintains its nuclear work is for generating electricity and producing radioactive isotopes to be used for radiation therapy in hospitals.

But world powers, particularly Western nations, are not convinced of the peaceful nature of its work.

Weeks earlier, in his first State of the Union address, U.S. President Barack Obama promised Iran would pay a price if it does not abandon its nuclear program, stating “…as Iran’s leaders continue to ignore their obligations, there should be no doubt: they, too, will face growing consequences.”

Tension over Iran’s nuclear ambition rose with the announcement by Mr. Ahmadinejad that he would step up uranium enrichment. Iran is reportedly prepared to increase uranium enrichment if the United States attempts to halt its nuclear program.

German newspaper Der Spiegel claimed to have access to an intelligence dossier showing the existence of a secret military branch of Iran’s nuclear research program, whose aim of producing a bomb has reached an advanced stage. According to the paper, “Experts believe that Iran’s scientists could produce a primitive, truck-sized version of the bomb this year, but that it would have to be compressed to a size that would fit into a nuclear warhead to yield the strategic threat potential that has Israel and the West so alarmed—and that they could reach that stage by sometime between 2012 and 2014.”

In response to Iran’s refusal to discontinue its uranium development, the United Nations, along with other Western nations, have repeatedly threatened sanctions against the nation, including a fuel embargo, which would likely cause Iranian gasoline prices to soar as Iran has no refineries and imports almost half of its total oil for gasoline consumption, and travel restrictions for senior members of the Revolutionary Guard and nuclear scientists.

According to The Associated Press, the last round of sanctions, enacted in March 2008, “authorized inspection of cargo shipments by two Iranian companies that are suspected of containing banned items. It also introduced financial monitoring of two banks with suspected links to proliferation activities and called on all countries ‘to exercise vigilance’ in entering into new trade commitments with Iran, including granting export credits, guarantees or insurance.”

Russia, the UN member with the strongest ties to Tehran, has wavered on the idea of further sanctions and does not support a nuclear strike on one of its largest trading partners.

According to non-profit organization Réalité, Israel’s Prime Minister Benjamin Netanyahu reassured Russian leadership in September of last year that unilateral pre-emptive strikes against Iranian nuclear installations would not be launched by Israel as long as Moscow did not supply Iran with an S-300 missile system, which would allow Iran to launch nuclear warheads.

A month later, Mr. Netanyahu sent evidence to Moscow that Russian scientists had been assisting Iran in building a nuclear bomb. According to Mr. Netanyahu, Russian companies have also supplied material to help produce ballistic missiles.

Russia and Iran heavily rely upon one another. According to one commentator, “For Russia, Iran is a regional power and an important trade partner. Russia needs Iran for arms sales, as well as for maintaining the security of Russia’s southern borders; Iran needs Russia for military equipment, energy security and political protection at the U.N. and the International Atomic Energy Agency (IAEA)” (ibid.).