This website requires the use of Javascript to function correctly. Performance and usage will suffer if it remains disabled.
How to Enable Javascript
New EU Leader Selected 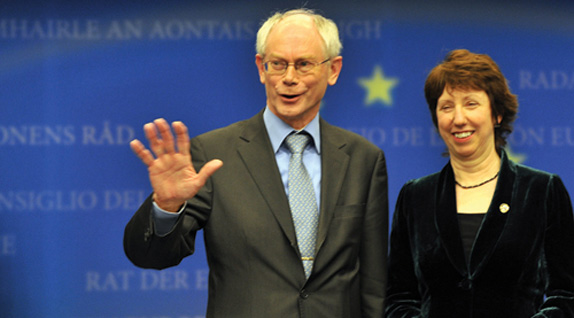 European Union leaders elected Belgian Prime Minister Herman Van Rompuy as the first permanent president of the European Council, an office created by the passage of the Lisbon Treaty.

Mr. Van Rompuy, 62, a Christian-Democrat politician and former economist, has been Belgium’s premier for almost a year. He has been credited with stabilizing the nation by mediating tensions between the French- and Flemish-speaking peoples.

The new two-and-a-half-year presidency will replace the EU’s six-month rotating presidential term, in which a member-state presides over EU meetings.

According to the European Union’s official website, Mr. “Van Rompuy’s core responsibilities will include chairing council meetings and representing EU leaders on the global stage. He will also represent the council in relations with other EU institutions.”

The two positions are intended to “enhance the EU’s role in world affairs and streamline its decision-making” (ibid.).

Both leaders are relatively unknown in their respective countries—let alone on the world stage. Mr. Van Rompuy was considered an obscure political figure until he was nominated as a candidate by German Chancellor Angela Merkel and French President Nicolas Sarkozy at a Brussels summit. Ms. Ashton, the current EU trade commissioner, has never held an elected office.

The Guardian reported that Mr. Van Rompuy often prefers to remain in the shadows of politics. “He has been a fixture in Roman Catholic and Christian Democratic politics for decades, but he shuns the limelight, appears ascetic and austere, and prefers to conduct his politics away from public gaze.”

Others claim he has a different agenda. Author Paul Belien, who has been acquainted with Mr. Van Rompuy since the 1980s, said in the Daily Mail that Mr. Van Rompuy is largely unattached to his home country. “His sole political ideal is the creation of a federal superstate, destroying national identities across Europe,” he wrote.

Mr. Van Rompuy also supports taxing European financial transactions to fund the EU and opposes Turkey’s induction to the European Union because, as “he has warned, it is an Islamic country and would dilute Europe’s Christian heritage” (Daily Telegraph).