This website requires the use of Javascript to function correctly. Performance and usage will suffer if it remains disabled.
How to Enable Javascript
Myanmar Answers International Sanctions

In his second visit since September, Mr. Gambari arrived with the backing of Western nations and in the wake of the recent tightening of sanctions by both the EU and U.S.

The general then condemned the sanctions imposed by other nations, telling Mr. Gambari to “understand that no other government can do better than us in such a tight-rope situation,” blaming the slow economic growth of the nation on the sanctions themselves.

Military leaders emphatically refused Mr. Gambari’s request to participate in three-way talks including opposition leader Aung San Suu Kyi, claiming that such an event was premature. However, only days after Mr. Gambari left the nation, top-level officials did meet with Dr. Suu Kyi—excluding the UN as a facilitator.

Further complicating the visit, Charles Petrie, the UN diplomat to Myanmar since 2003, was ordered to leave the nation just before Mr. Gambari arrived. Mr. Petrie, who plans to leave Myanmar by the end of November, has been vocal in detailing conditions in the nation and the failings of its government. 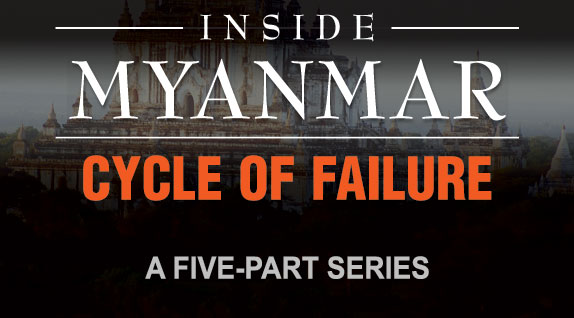 Inside Myanmar: Cycle of Failure – A Five-Part Series
News reports regarding Myanmar (formerly Burma) include disturbing descriptions: deadly clashes, refugees, starvation, rape and ethnic cleansing. While the crisis has been mounting for almost 20 years, only now are international news headlines—“Asian Darfur,” “Forgotten Crisis,” “The Silent Genocide”—bringing the world’s attention to Myanmar’s ever-worsening conditions. And only now are the world’s leading nations beginning to address (to varying degrees) the nightmarish state of affairs. Why? Myanmar is a case study of disorder and chaos, an example of how and why governments—democracies, monarchies, totalitarian theocracies, socialist states, communist regimes, dictatorships and others—are failing, even breaking down. This five-part series examines the cause—the underlying reasons—for Myanmar’s current turmoil, and identifies the ultimate solution to its troubles.