This website requires the use of Javascript to function correctly. Performance and usage will suffer if it remains disabled.
How to Enable Javascript
Britons Fear Summer of Terrorism

In light of recent terrorist attacks launched against the United Kingdom, British authorities warn the latest foiled attempts could be the first of many this summer.

In response to the failed attacks, the government has raised the terror alert to “critical”—its highest level.

Since the beginning of the weekend when British authorities defused a detonator in a car filled with gasoline, nails and gas cylinders parked outside a London nightclub, police have searched over 19 locations across Britain for additional suspects, and stymied at least three other copycat attempts.

While details of the attacks have been slow to emerge, it is known that:

London’s Stansted Airport was closed briefly due to the threat of repeated attacks. While authorities are unsure if the attempted plots are directly connected with al-Qaeda, none of the suspects appear to be of British descent. However, a Kurdish terror group thought to be responsible for bombings in Iraq has been connected with the three failed car bombs in London.

The situation has put UK residents on edge, leaving them to wonder what is next for their country.

The BBC reported the head of Scotland Yard’s Counter Terrorism Command confirmed, via an inside source, that by the end of the weekend three other car bombs had been discovered in London. They are thought to have been connected to the flaming jeep that rammed into the side of the Glasgow Airport, which left the area looking more like a war zone than an airport.

“There is a group of individuals out there who have the capability and the intent to carry out attacks in the UK,” he said, adding, “In our judgment it is very likely there will be further attacks.” 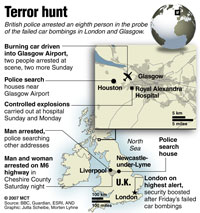 The recent attacks have sparked fears that a repeat of America’s 9/11 attacks could occur in the United Kingdom.

According to ABC News, a secret U.S. law enforcement report revealed that the United States had received knowledge of terror threats against “airport infrastructure and aircraft” in Glasgow and Prague, Czech Republic, two weeks prior to the actual attack.

In addition, according to an official with access to the document, the chatter is reminiscent of the type of intelligence the U.S. gathered before the September 11 attacks, in which 19 terrorists hijacked several airliners, resulting in the deaths of nearly 3,000 people.

British authorities expect more arrests as they continue their investigations, searching for clues about possible future connections to terrorist attacks. 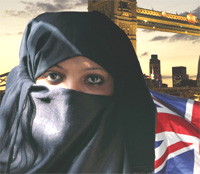 Muslims in Britain: At the Crossroads
British Muslims are facing a growing radical element in their midst. Moderate Muslims and non-Muslims are alarmed. What does this mean for Britain?