This website requires the use of Javascript to function correctly. Performance and usage will suffer if it remains disabled.
How to Enable Javascript
Nowhere to Go: Displaced Iraqis Desperate as Camps Close 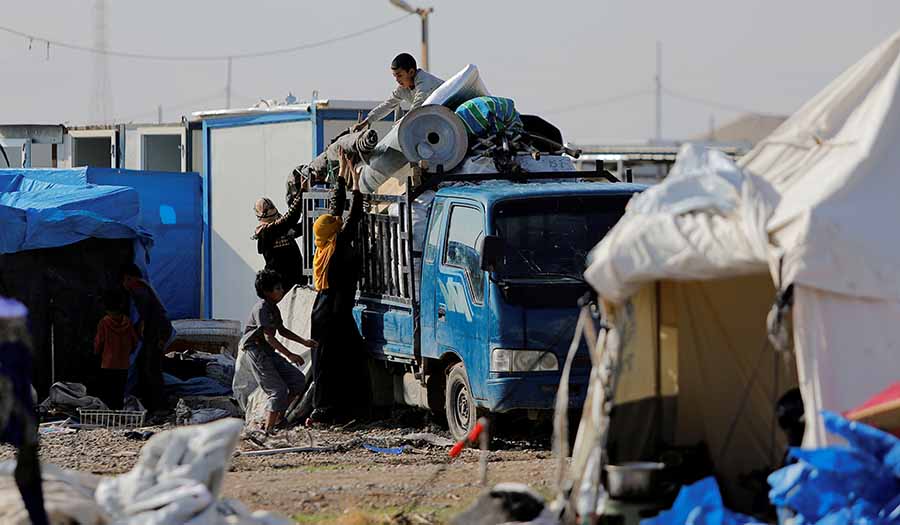 Uncertain Future: Displaced Iraqis load their belongings onto a truck as they prepare to be evacuated, at Hammam Al-Alil camp, south of Mosul, Iraq (Nov. 10, 2020).

MOSUL (Reuters) – Iraq has started closing camps housing tens of thousands of people, including many who fled their homes during the final battle against the Islamic State terror group, but aid organizations warn this could create a second wave of displacement with dire consequences.

Among those having to leave are 50-year-old Umm Ahmed and her two sons, who have lived at the Hammam al-Alil camp since 2017 when their house in Mosul was destroyed in an air strike by the U.S.-led coalition as it battled to retake the city from Islamic State.

“I don’t have any income, no one provides for us. The camp became our home,” said Umm Ahmed, who cannot take on manual work due to a disability. She says her sons both have mental health problems.

Islamic State upended the lives of millions of Iraqis when they took swathes of the country in 2014 and imposed a brutal rule that in some places like Mosul would last three years.

“Before ISIS, my son used to clean the streets and we would survive with whatever income he managed to get. But now, he is too ill to work,” said Umm Ahmed.

Hammam al-Alil, 15 miles south of Mosul, is one of several camps due to shut this month. The operation had been scheduled for earlier this year but was delayed by the coronavirus pandemic, according to Khalid Abdul Karim, who heads the displacement and migration office in Mosul.

Each family would receive $1,263.03 in aid during the first year and the authorities are coordinating with international aid organizations to ensure they receive assistance once they settle elsewhere, Abdul Karim said.

But aid organizations say it will be harder to reach the most vulnerable if spread across the country, and some could face violence and arrest on returning home if they have relatives who were affiliated with armed groups, including ISIS.

Around 100,000 people are at risk of becoming homeless as the closures were not properly planned and coordinated, the Head of Support for Iraq at the humanitarian organization Norwegian Refugee Council, Ahmad Azzam, told Reuters.

Packed up her belongings, an Iraqi woman from the province of Baji says she has no relatives to take care of her and her children. Her husband died during the war and she has been living in the camp since.

Her children, like thousands of others born under Islamic State rule, have no identification papers, without which they will struggle to access basic services, including education.

“Whether they give us support money or not depends on their conscience,” Umm Ahmed said as she watched her neighbors load their things onto a pickup truck and set off toward an uncertain future.