This website requires the use of Javascript to function correctly. Performance and usage will suffer if it remains disabled.
How to Enable Javascript
World News Report: August 2015 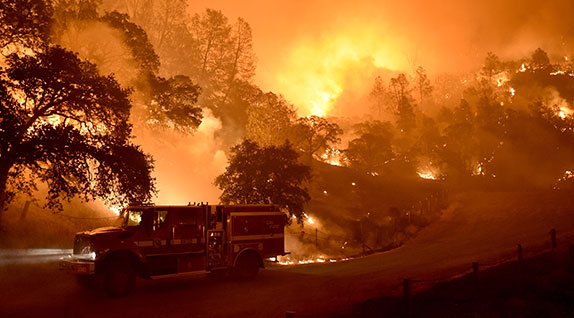 Nothing but terrible news is hitting all over the world. Nearly every important article that is released becomes another sobering proof that this is not God’s world (II Cor. 4:4). Extreme weather is affecting many parts of the United States and the world. Just think of one example—the unbelievable monsoon that has caused so much destruction in Myanmar. At The Restored Church of God Headquarters, it is truly amazing how quickly an area can go from having way too much rain to too little in the span of just weeks. It seems like just yesterday we were receiving rain almost every day. Now we have seen over three weeks of parched conditions, with rain coming about twice for 10 minutes in that time.

In California, terrible, terrible ongoing drought is causing devastating wildfires, which are spreading very rapidly and burning or threatening a great many homes. One fire doubled in size in a single day: “A massive wildfire west of Sacramento, California, spanned 54,000 acres Sunday, up from 27,000 acres the previous evening. The Rocky Fire, in Lake, Colusa and Yolo counties, was just 5 percent contained late Sunday afternoon, CalFire spokesman Daniel Berlant said…More than 12,000 people had been ordered to evacuate and several highways were closed…Dozens of buildings—including two-dozen homes—had been destroyed, and 6,000 more buildings remained threatened by the fire, which was sparked in the drought-stricken state on Wednesday and exploded in size amid dry, windy conditions on Saturday, Berlant said. This ‘is a very dangerous fire,’ he said.

“[Governor Jerry] Brown ordered a state of emergency Friday night to mobilize additional crews and resources. ‘California’s severe drought and extreme weather have turned much of the state into a tinderbox,’ he said…Described as ‘unprecedented’ by authorities, the largest blaze—which is known as the Rocky Fire—tore across the Lower Lake area north of San Francisco. It almost tripled in size to 84 square miles over the weekend” (NBC News).

Meanwhile, Iran and Iraq recently endured some of the hottest temperatures ever recorded on the “heat index.” British newspaper The Telegraph reported this (italics mine): “Iran is buckling under the pressure of a massive heatwave passing across the Middle East, with temperatures soaring to nearly 70C [158F]. Scorching heat levels of 50C [122F] have already paralysed nearby Iraq, where officials were forced to call a four day public holiday because it was too hot to work. But the word ‘hot’ has taken on an entirely new meaning in Iran’s city of Bandar Mahshahr, where it was claimed that the city’s heat index, or ‘feels-like temperature,’ was among the highest ever recorded.

“The heat index was recorded by a group of astonished weather experts who predict the country could be enduring some of the hottest urban temperatures ever endured by mankind. ‘That was one of the most incredible temperature observations I have ever seen and it is one of the most extreme readings ever in the world,’ said AccuWeather meteorologist Anthony Saglia. It is just a few degrees lower than the highest ever recorded heat index, which was 178F (81C) in Dhahran, Saudi Arabia on July 8, 2003.” One place in Iran was reporting 164 degrees Fahrenheit three days ago. (To learn more about why the extremes in weather, read our Prophetic Conditions Series What’s Wrong With the Weather?)

Politically in the Middle East, a deal was finally brokered between six world powers and Iran over its controversial nuclear program. In time this will be seen to be the biggest political development to occur since the Second World War. The consequences of the agreement are sobering and beyond far-reaching. Although the United Nations already enacted the deal, the United States Congress is in the middle of a 60-day review period (to end September 17) before an upcoming ‘yes’ or ‘no’ vote by the House of Representatives and the Senate. The legislation may pass—it will be close—but many are still trying to stop it from becoming law.

The nation of Israel, led by Prime Minister Netanyahu, is doing everything it can to fight the agreement. The Times of Israel reported this in an article titled “Netanyahu dispatching big guns to US as Iran deal battle heats up:” “Prime Minister Benjamin Netanyahu is ready to ‘go all the way’ in protesting the Iran nuclear deal in the US, despite the low prospects of Congress derailing the accord. In deciding on a full-on attack against the deal rather than a quieter campaign, the prime minister is risking further alienating US President Barack Obama, who may be forced to use his veto to protect the deal. Netanyahu’s approach is to stress that he is not opposed to the Obama administration, but merely to the deal…”

Another source revealed more about Mr. Netanyahu’s plan: “A day after world powers and Iran reached a comprehensive nuclear agreement, Prime Minister Benjamin Netanyahu launched an international media campaign against the deal, highlighting its flaws. ‘Iran has here two paths to the bomb,’ Netanyahu said in an interview with NBC News on Wednesday. ‘One is if they keep the deal, and the other is if they cheat on the deal. They can cheat on the deal because inspections are not instantaneous, anywhere, anytime, as Foreign Minister of Iran [Mohammad Javad] Zarif said correctly. In fact, you don’t have inspections within 24 hours; you have 24 days before you can inspect any site that you find suspicious in Iran. Twenty-four days. Can you imagine giving a drug dealer 24 days’ notice before you check the premises? That’s a lot of time to flush a lot of meth down the toilet.’ In an address to the Knesset on Wednesday…Netanyahu said he plans to apply pressure on the U.S. Congress to thwart the implementation of the deal” (Israel Hayom).

Meanwhile, Europe is facing a “perfect storm” of growing challenges. FOUR huge problems are converging at once on the continent. Here is a poignant description of what is at stake:

“Four great crises around Europe’s fringes threaten to engulf the European Union, potentially setting the ambitious post-war unification project back by decades. The EU’s unity, solidarity and international standing are at risk from Greece’s debt, Russia’s role in Ukraine, Britain’s attempt to change its relationship with the bloc, and Mediterranean migration. Failure to cope adequately with any one of these would worsen the others, amplifying the perils confronting ‘Project Europe.’

“Greece’s default and the risk, dubbed ‘Grexit,’ that it may crash out of the shared euro currency is the most immediate challenge to the long-standing notion of an ‘ever closer union’ of European states and peoples…An economic collapse of Greece, apart from the suffering it would cause and the lost billions for European taxpayers, could aggravate all three of Europe’s other crises and destabilize the fragile southern Balkans…Britain’s demand to renegotiate its membership terms and put the result to an uncertain referendum by 2017 raises the risk of the EU losing its second largest economy, main financial center and joint strongest military power” (Reuters).

Despite these major issues facing Europe, God clearly spells out through prophecy the rise of a European superpower that will completely replace—and dwarf!—the current union and bring widespread prosperity to many nations.

Keep watching these developments and request our eye-opening free booklet Who or What Is the Beast of Revelation? to learn what lies ahead for Europe.