This website requires the use of Javascript to function correctly. Performance and usage will suffer if it remains disabled.
How to Enable Javascript
World News Report: January 2015 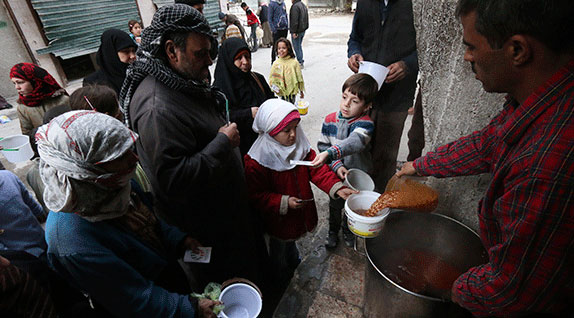 The year 2014 was a fearful one for the world. The attack in Paris alone by two Muslim extremists who slaughtered 12 employees of a French magazine almost seems to encapsulate the whole previous year. But 2014 was a year that also saw a deadly and ongoing Ebola outbreak, the rise of the brutal Islamic State in Syria and Iraq, widespread political turmoil, airplanes disappearing under strange circumstances, and the near-breakup of the United Kingdom with the failed Scottish independence vote. Then there were the aborted talks between Israel and the Palestinians, followed by Israel’s war with Hamas, and of course the crisis in relations between Israel and America.

Obviously, problems in negotiations with Iran, the Sony hacking event, and political scandals of every sort in all corners of the world played their part—as did many other things, which made this the worst year since the last year of World War II. But even WWII was essentially a struggle largely affecting just two parts of the world, Europe and the Pacific.

In the midst of such worsening problems, many of this world’s thinkers, writers, politicians, scientists and religious leaders still believe conditions will somehow “work out in the end.” God foretold a time when world leaders will declare, “Peace, peace; when there is no peace” (Jer. 6:14; 8:11). Many voices will soon echo this chorus, repeating the great mistake of former WWII British Prime Minister Neville Chamberlain, who left a meeting with Adolf Hitler and immediately declared, “Peace in our time!”—but this was just as Nazi Germany was rising.

A stunning example of this “peace, peace” mindset was seen in a recent Telegraph article, headlined: “Goodbye to one of the best years in history.” The article begins, “…This may have felt like the year of Ebola and Isil but in fact, objectively, 2014 has probably been the best year in history. Take war, for example—our lives now are more peaceful than at any time known to the human species. Archaeologists believe that 15 per cent of early mankind met a violent death, a ratio not even matched by the last two world wars. Since they ended, wars have become rarer and less deadly…”

Before continuing, the article hedges by claiming 2014 has “probably” been the best year in history: “…Global life expectancy now stands at a new high of 71.5 years, up six years since 1990…The Ebola crisis has led to 7,000 deaths, each one a tragedy. But far more lives have been saved by the progress against malaria, HIV and diarrhoea. The World Bank’s rate of extreme poverty (those living on less than $1.25 a day) has more than halved since 1990, mainly thanks to China…” It continues, “Ministers are now fretting about something else: a ‘time bomb’ created because citizens are living longer and healthier lives than ever…” The author concluded, “Nothing is irreversible. And there will be a great many people for whom life is tough, and looks set to remain so for some time. We still have a lamentably long list of problems to solve. But in the round, there’s no denying it: we are living in the Golden Era. There has never been a better reason for people the world over to wish each other a happy and prosperous new year.”

It is amazing—in fact, SHOCKING!—that people can make such rosy proclamations about an obviously imploding world. Consider. Many of the world’s experts begin with flawed evolutionary thinking that presupposes mankind is constantly evolving. It is this faulty foundation that allows so many to ignore worsening conditions around them and to conclude that humanity must be improving.

Those who are striving to follow Christ must see the reality of world conditions. Now back to reality. The Four Horsemen of Revelation 6 are picking up speed. The global population explosion is not being solved. One billion people around the world live in extreme poverty. “Wars and rumors of wars” (Matt. 24:6) are occurring all over. Children are under attack like never before.

Notice this quote from a recent Reuters article titled “UN: 2014 bad year for kids”: “The UN children’s agency Unicef declared 2014 a devastating year for children today with as many as 15 million caught in conflicts in Central African Republic, Iraq, South Sudan, Syria, Ukraine and the Palestinian territories. Unicef executive director Anthony Lake said the high number of crises meant many of them were quickly forgotten or failed to capture global headlines, such as in Afghanistan, Democratic Republic of Congo, Nigeria, Pakistan, Somalia, Sudan and Yemen.

“Globally, Unicef said some 230 million children were living in countries and regions affected by armed conflict…‘Children have been killed while studying in the classroom and while sleeping in their beds; they have been orphaned, kidnapped, tortured, recruited, raped and even sold as slaves,’ Lake said in a statement. ‘Never in recent memory have so many children been subjected to such unspeakable brutality.’”

It is natural for mankind, surrounded by such bad news, to long for hope. Everyone wants to feel good about humanity’s future—the future of their children and grandchildren. But a deceived mankind does not realize that the only true hope for its future is divine intervention. You can know of God’s Master Plan for the human race. This marvelous hope is going out from only one place on the planet—The Restored Church of God, which produces The Real Truth. To learn more about what lies ahead, read our booklet How World Peace Will Come!