This website requires the use of Javascript to function correctly. Performance and usage will suffer if it remains disabled.
How to Enable Javascript
World News Report: December 2014 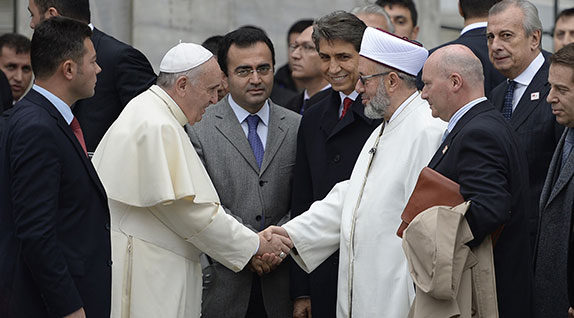 The biggest news in November took place in the religious world when Pope Francis made a historic three-day visit to the Muslim nation of Turkey. Francis first met with the Turkish President Recep Erdogan. The Guardian reported this about the pope’s comments when speaking in Ankara: “Francis highlighted his commitment to dialogue with Muslims and other Christians at a time of increased violence against Christian and other minorities in the region…Speaking at a joint press conference with Erdogan, the pontiff underlined that it was ‘licit, while always respecting international law, to stop an unjust aggressor,’ but added that military intervention would not bring sustainable peace to the region.”

Later in his trip, Francis met with Bartholomew I, the leader of the Orthodox Christians, and who represents 300 million adherents—30 percent of all the non-Catholic professing Christians in the world. One headline described the absolutely unprecedented conduct of a Roman pope showing deference to his eastern counterpart: “Pope Francis Bows, Asks for Blessing from Ecumenical Patriarch Bartholomew in Extraordinary Display of Christian Unity” (The Associated Press). The many forms of this world’s Christianity are moving toward eventual unity. The pope just announced recently that he would meet with the Russian Orthodox patriarch—the spiritual leader of 150 million—“any time, anywhere.”

In a joint statement, the two men also came out with a strong indictment of ISIS: “Pope Francis and the spiritual leader of the world’s Orthodox Christians demanded an end to the violent persecution of Christians in Syria and Iraq on Sunday and called for dialogue with Muslims, capping Francis’ three-day visit to Turkey with a show of unity. Francis and Ecumenical Patriarch Bartholomew I issued a joint declaration urging leaders in the region to intensify help to victims of the Islamic State group, and especially to allow Christians who have had a presence in the region for 2,000 years to remain on their native lands” (AP).

Yet Francis also included an olive branch to Muslims in his extraordinary comments: “Francis, who represents the 1.2 billion-strong Catholic Church, and Bartholomew, the spiritual leader of the world’s 300 million Orthodox Christians, called for ‘constructive dialogue’ with Islam ‘based on mutual respect and friendship. Inspired by common values and strengthened by genuine fraternal sentiments, Muslims and Christians are called to work together for the sake of justice, peace and respect for the dignity and rights of every person, especially in those regions where they once lived for centuries in peaceful coexistence and now tragically suffer together the horrors of war,’ they said” (ibid.).

The pope underscored his words with action, actually praying in Turkey’s famous Blue Mosque, going further than just rapprochement with Christianity: “His head bowed and hands clasped in front of him, Pope Francis stood Saturday for two minutes of silent prayer facing east [toward Mecca] inside one of Istanbul’s most important mosques…Francis prayed alongside the Grand Mufti of Istanbul, Rahmi Yaran, who had his palms turned toward the sky in a Muslim prayer, inside the 17th-century Sultan Ahmet mosque. ‘May God accept it,’ Yaran told the pope at the conclusion of a poignant moment of Christian-Muslim understanding” (AP).

Pope Francis, unlike any before him, is driven to bring people together, including those of other entirely different religions. He is more inclusive than any previous pope in history—in fact by far. He is also more vocal, more active and more engaged at the grassroots level, particularly regarding the poor, than any previous Catholic leader. This is important because what Francis says and does is followed closely by 1.2 billion people around the world—and this is just in his own church. Include the over 1 billion in the other forms of Christianity, many of whom look to the pope as a spiritual guide. And then include some or many of the 1.5 billion Muslims who are watching his every word and action.

The influence this ONE MAN now has on the world stage is UNPRECEDENTED! I have studied history (of war, the world, Europe, America and the true Church) my whole life and I have never seen or read of anyone with this kind of reach, and in only 20 or so months of activity.

These meetings are more crucial than almost anyone realizes. Keep watching!