This website requires the use of Javascript to function correctly. Performance and usage will suffer if it remains disabled.
How to Enable Javascript
Japan’s Earthquake-Tsunami Disaster: One Year Later

Though some areas have begun to thrive again, the nation still has a long road to recovery. 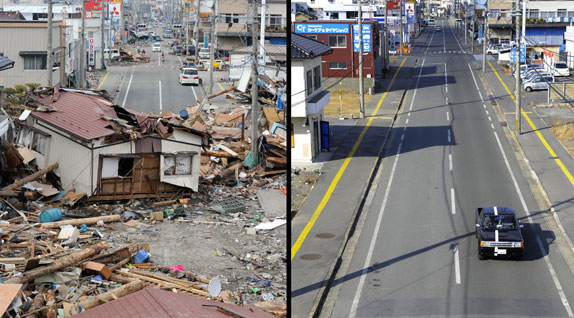 Toshifumi Kitamura/AFP/Getty Images
Drastic Change: Left, a shot taken after the tsunami in Ofunato, Iwate prefecture, shows the destruction it caused (March 14, 2011). Right, the area is significantly transformed about a year after the tsunami struck (Jan. 15, 2012).

The temblor and massive wave, which according to the World Bank caused at least $225 billion in economic damages, has continued to take a toll, both financially and emotionally. Massive amounts of debris from more than 125,000 destroyed buildings, broken levees, continued flooding due to excessive rain, and towns without power or water services have meant a slow recovery for the nation of more than 127 million people. Many of the country’s elderly, who once lived in coastal regions, now are forced to reside in temporary housing complexes.

A snapshot of what Japan is facing reveals the state of sections of the country one year later.

But there has been some progress.

In certain areas, debris has been removed and roads repaved. A reporter from Canadian news magazine Maclean’s noted that when he last visited a hard-hit section of Japan, “the roads were strewn with muck or littered with boats, the buildings were decorated with the ropes and buoys of the oyster farms that once thrived here and the tsunami, which struck shortly after the massive earthquake of March 11, toppled buildings.

“All that’s gone now—the streets scrubbed, most of the debris carted away and sorted into metal or wood or plastic. What’s left isn’t much of a town.”

While the government hopes to clear the debris by 2014, as of late February, only five percent of rubble left by the tsunami has been cleared.