This website requires the use of Javascript to function correctly. Performance and usage will suffer if it remains disabled.
How to Enable Javascript
Minute-to-minute Living

Many feel trapped in the stress-filled, nonstop rat race called the modern world. Is there more to life than just living in the “here and now”? 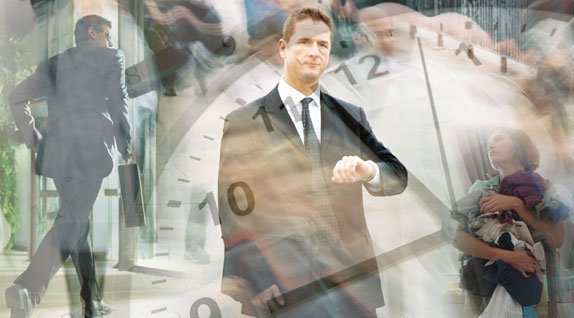 Before reading any further, turn off your cellphone, computer, television, radio and MP3 player. Do not allow yourself to be distracted by phone calls, TV shows or music. Do not let instant messages or emails interrupt you or break your train of thought.

At this point, you are probably thinking, “You have got to be kidding!”

But consider. You possess a precious, highly valuable, yet often mismanaged, resource: time. And your time is important. Once it is gone, it is gone forever—you cannot afford to let it go to waste!

With modern communication devices turned off, you might feel as though you are disconnected from the outside world. Relax. The average person reads 250 words a minute; it should take you only about 10 minutes to read this article. Afterward, you can turn everything on and return to this adrenaline-driven civilization.

In the meantime, take advantage of the momentary break from society, and consider what you are really “missing.”

Welcome to the Rat Race

In the Western world, a typical day begins with a mad rush to get the family ready for the day. Breakfast time is far from a “family meal.” Often, each member is on his or her own, getting his cereal, toast or a quick snack—or even misses it altogether because he does not have time.

While breakfast is considered the most important meal of the day, an NDP Group market research survey revealed that 46 percent of people ages 18 to 34 skip it. Without this essential meal, productivity is severely limited.

Next is the challenge of commuting to work. The United States Census Bureau found that the average commute is 25 minutes per day in the U.S.—over 100 hours each year! This is longer than the 80 hours of vacation time that workers spend the entire year anticipating. With many drivers running behind, everyone is in a hurry to get to work on time. Tempers often get short, and road rage ensues.

Then there are the many hours spent at work meeting deadlines, writing emails and memos, making phone calls, etc.—though the pace seems to quicken, less seems to be accomplished. A research paper published by the Families and Work Institute titled “Overwork in America: When the Way We Work Becomes Too Much” concluded that one in three American employees are chronically overworked; 54 percent of American employees have felt overwhelmed at some time in the past month by how much work they had to complete; and 29 percent of employees spend a lot of time doing work that they consider a waste of time (and these employees are more likely to feel overworked).

The fast pace continues after the family returns home from school and work. This is no longer a definite time of the day, as mom or dad might be working overtime or a second job to make ends meet—leaving their children unsupervised. There are extracurricular activities to which the children will need to be driven, such as football, baseball, soccer, ballet and gymnastics. Then there are television shows that “must” be watched and video games that “must” be played. Groceries need to be bought, and laundry needs to be done. Few families will be able to sit together uninterrupted during dinner, discussing the day’s issues and building family relationships.

Eventually, the day comes to an end, leaving many exhausted, stressed and worn out, wondering, “Where did the day go?” Sadly, it will only begin again as soon as the alarm clock sounds.

Effects of the Race

The modern world lives in a way that leaves no room for second thoughts, and no room to consider the many adverse effects on society. Lack of basic self-control is prevalent, as is the desire for instant gratification—especially among many of today’s youth.

In the United States and Britain, binge drinking among teenagers and young adults is a serious problem. For these wild partiers, a “good time” consists of overdrinking to the point where they wake up with a terrible hangover, not remembering what happened the night before. This trend has led drug manufacturers to develop a “cure” for the bad effects of their carelessness. BBC News Magazine reported that the tablet treatment Blowfish was created so those who did not want to “suffer a hangover” as a result of their irresponsibility could enjoy more “free time.” In other words, rather than having to stop and consider the consequences, people can now lay aside good judgment and simply pop a pill the next morning to make the adverse symptoms disappear.

Impulsiveness can be demonstrated in other ways. During a popular afternoon television talk show, a conversation occurred that could have been mistaken for an excerpt from a morning shock radio show. The program featured two female guests talking explicitly about their sexual escapades. One of them compared sexual desire for a stranger to wanting an eclair in a bakery. The other said she had four or five sexual “partners” she could “call anytime.” And this was on a daytime television program!

Our society has drastically changed in other ways. Computers, the Internet and cellphones help us to communicate quickly and more efficiently. But the misuse of email is eroding what was once common etiquette in business communications.

At a quick glance, it looks like a foreign language. Here is the translation: “Hi mate. Are you okay? I am sorry that I forgot to call you last night. Why don’t we go and see a movie tomorrow?” Even the translation has lost the formality and precision that was once used in communication. Gone are the days when writers carefully considered each word, because every word had meaning.

Technology has not only changed the way we communicate, but also the way spare time is spent. Rather than playing an invigorating game of soccer, many now turn to a virtual world for their social interaction. According to research by Optenet, a global IT security company, visits to websites related to online role-playing video games have grown 212 percent! Video gaming is so ingrained within youth culture that 97 percent of children play video games, and about a third of parents say they play video games as a way to spend time with their children.

Family life is under constant assault. On average, a father spends only five minutes with a child each day, and a mother just 20 minutes. Much more time is required to properly train children how to live and how to make right decisions. No wonder many parents lose touch with their children, and many families fall apart.

Television can also have adverse effects on the family. Consider these statistics, compiled by California State University.

Ponder the last point. Over half of 4- to 6-year-olds chose television over who should be considered the most important man in their lives!

There is evidence suggesting that early exposure to television can “rewire” a child’s developing brain patterns. An article in The Wall Street Journal related the experience of professional storyteller Odds Bodkin. In his experience performing for children, he observed that restlessness sets in after about seven minutes, as their inner clocks anticipate a “commercial break.” They appear to be conditioned by television to expect a commercial interruption every seven minutes.

In reading this article, you may have now reached that seven-minute mark when the attention span wanes and the mind craves a change. Perhaps you are beginning to feel that restlessness.

You have a choice: If you love minute-to-minute living—stop reading, turn everything back on, and rejoin the rat race. The modern world will support your choice.

On the other hand, if you choose to continue reading, you will begin to learn the cause of the rat race in which we live.

We have seen the results of minute-to-minute living in facts and statistics. These consequences may not have been foreseen by society, but they were written about thousands of years ago by the prophet Daniel, who stated that in “the time of the end: many shall run to and fro, and knowledge shall be increased” (12:4).

This time was also described by the apostle Paul: “In the last days perilous times shall come. For men shall be lovers of their own selves, covetous, boasters, proud, blasphemers, disobedient to parents, unthankful, unholy, without natural affection…lovers of pleasures more than lovers of God” (II Tim. 3:1-4).

The effects of this modern age are related to a choice between two basic ways of life: one is the way of give—caring, outgoing love and concern for your fellow man; the other is the way of get—acquiring everything possible for the satisfaction of self. Our entire society is built on catering to our human nature—the way of get.

In our fast-paced world, many no longer take the time to ask the big questions of life: “Who am I?” “What am I?” “Why do I exist?” These are questions that we need to ask—and answer. The answers are available, if we look in the right place—the Word of God. Scripture reveals God’s Plan for mankind!

As you endure the adrenaline-fueled rat race we call civilization, realize that there is a reason for your existence—and it is worth spending that precious resource called time to discover it!

To learn more about God’s purpose for your life, read Why Do You Exist? and The Awesome Potential of Man.