This website requires the use of Javascript to function correctly. Performance and usage will suffer if it remains disabled.
How to Enable Javascript
Why This Magazine!

The Real Truth is a truly unique publication. There is no magazine like it. It answers the BIG questions in life, those that few others seem willing to address.

Actually, this magazine is the revival of The Plain Truth magazine, started by then editor-in-chief, Herbert W. Armstrong, in 1934. Over the next 52 years, until his death in 1986, the circulation of The Plain Truth slowly grew to 8.2 million monthly subscribers, with an estimated 25 million readers worldwide!

How was this possible? Let me tell you the story—because it is really the story behind The Real Truth magazine.

God called Mr. Armstrong in the spring of 1926. He was forced to disprove evolution, while at the same time prove absolutely the existence of God. Through a period of intensive study, he slowly began to see, from the Bible, that God was working out a great purpose on Earth. He learned that God’s Plan had been foretold long ago on the pages of a book that most people own, but rarely or never read. As a result, the world was in complete ignorance of that Plan.

The idea of a fledgling magazine was born in Mr. Armstrong’s mind. He understood that a hard-hitting monthly magazine, coupled with The World Tomorrow radio program, was necessary to reveal the plain truth—the real truth—behind what the media reported.

Newspapers, radio and later television only reported what was happening without explaining why. Mr. Armstrong recognized that mankind does not know the solutions to civilization’s greatest problems—and that those solutions were found in the Bible. He also understood that modern religion had utterly failed in explaining the real purpose of life.

Technology has come a long way since then. Today, design and publishing capability is dazzling. This was not the case in 1934. Mr. Armstrong began the first issue of The Plain Truth in February of that year by using a hand-cranked mimeograph machine to print 250 copies for the first tiny subscription list. From the outset, the magazine explained the real meaning of world news and events. It addressed the biggest, most perplexing problems facing mankind—head-on!

Subscribers saw this, and the readership steadily grew, month after month, and then year after year. By the time of Mr. Armstrong’s death, The Plain Truth was read in seven languages—in all countries of the world. It was the single largest, multi-language, religious publication—by far—in the world at the time. Its circulation may have only been exceeded by Reader’s Digest.

The Real Truth magazine also started small—but has grown rapidly in readership because Mr. Armstrong paved the way with that truly extraordinary magazine.

Mr. Armstrong understood Christ’s instruction, “Freely you have received, freely give” (Matt. 10:8), so he understood that he must offer the magazine free of charge. He also determined to never accept advertising so that the

powerful impact of its content was neither diminished in size nor diluted in purpose and impact.

Similarly, The Real Truth offers all its bi-monthly hardcopy issues and electronic resources free to those who are seeking to understand today’s world.

The Plain Truth was never a political magazine—and never a typical religious magazine. Neither is The Real Truth. The Plain Truth spoke out at a level above politics—unlike the endless columnists, commentators, reporters and political analysts of this world who look to humanly devised solutions. It dared to speak with boldness and clarity about the only solutions to what are now insoluble problems plaguing humanity and explained that those solutions will come.

So does The Real Truth.

The Real Truth magazine does not offer opinions, suppositions or assumptions. It brings facts, evidence and proof of those issues about which it speaks. We speak from a position of authority, and never apologize for it.

Of course, some people do not want the facts. They actually prefer cherished suppositions in place of correct understanding. The Real Truth offers you correct understanding—explanations you have never seen before. It brings you confident assurance that you are looking at social trends, world conditions, current events and burning issues from the only right perspective.

The tradition of the high standard of excellence, which The Plain Truth achieved, brought it before presidents, prime ministers and kings. Brilliant professors, accomplished scientists, skilled musicians, great athletes, captains of industry and other leaders in every walk of life read it. But it was read and appreciated in far more cases by the common man—teachers, bricklayers, salesmen, secretaries, farmers, factory workers, truck drivers, construction workers, and many others.

The Plain Truth changed lives. It brought hope. It explained the bigger view in a world where most are completely blind to the causes behind all the bad effects billions of people witness every day.

The Real Truth also brings hope and a vision of the big picture. This magazine is truly different in almost every way.

It has become distressingly evident that this world is in terrible trouble. Time is running out for mankind to stop war, terrorism, famine, disease, pollution, poverty, ignorance, religious confusion, rampant immorality, breakdown of the family and other growing problems that threaten civilization.

Almost none are willing to speak up—or out—about these problems.

The writers of The Real Truth and I, as the voice of The World to Come, do this! We do not hold back the answers you need in order to find the way to peace, happiness, abundance and true security amid the short-term gloom that lies ahead for this world!

We produce articles explaining the cause of war, what’s wrong with the weather, can science eradicate pollution, how racial bigotry will eventually disappear, what lies ahead for America and Britain, the value of right ethics—and the definition of true character, the real cause of the moral crisis in the West, what’s wrong with modern education, why so many seek escape and pleasure, and the definition of true success.

We also explain the world’s lack of great leaders—and what will replace current leaders, how peace will come in our time, how to build strong families—rearing happy, productive children, how to end your financial worries, and why new diseases are appearing and older ones are reappearing—stronger than before.

We are also not afraid to speak out about what is wrong with modern religion. We explain why there are thousands of differing—and disagreeing—forms of Christianity, the real origin of man’s supposed “Christian” holidays, why religion cannot explain or solve a single one of the world’s great problems, how to understand real faith, how to identify the real Christ of the Bible, the way of “give” versus “get,” the origin of human nature, principles of healthful living, how to identify God’s true Church, and many, many other related subjects.

These articles and other regular features do not just describe the effects of today’s problems. There is already too much of that, and it leaves people uncertain, fearful and depressed because they see no way out! They identify the causes—why things happen as they do, revealing the true purpose for this life.

Search out the facts of what we say. I also urge you to follow up on the links within articles on The Real Truth website. They lead to the vast amount of other literature and materials that we offer.

After doing this, only be willing to believe us if you see proof. We offer you plain, clear truth, made understandable to any with an open mind.

You cannot afford to miss a single issue. And be sure to check the website for other news and updates posted regularly. This will allow you to keep abreast of what is happening in a world where huge, cataclysmic changes lie just over the horizon!

On a final note: After Mr. Armstrong’s death, his successors began to alter and dismantle The Plain Truth, eventually selling subscriptions to a mere few thousand people who still wanted it in its new form.

This meant that someone had to restart—restore—The Plain Truth magazine. Decades of experience trained me for this task. From the time I married Mr. Armstrong’s secretary in 1971, circumstances allowed me to grow close to him and to learn from him personally for a period of almost 15 years. This prepared me to carry on in his absence, and to restore the plain understanding of that wonderful magazine.

While we cannot bring back the original Plain Truth magazine, you are reading its replacement, its only true extension, identical in style, impact—and message! 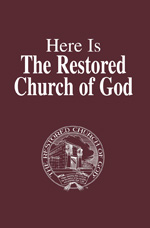 Here Is The Restored Church of God