This website requires the use of Javascript to function correctly. Performance and usage will suffer if it remains disabled.
How to Enable Javascript
Why You Should Keep Watching the News, Even When You Are Sick of It

Why You Should Keep Watching the News, Even When You Are Sick of It

Here is why you do not want to become another statistic of news fatigue. 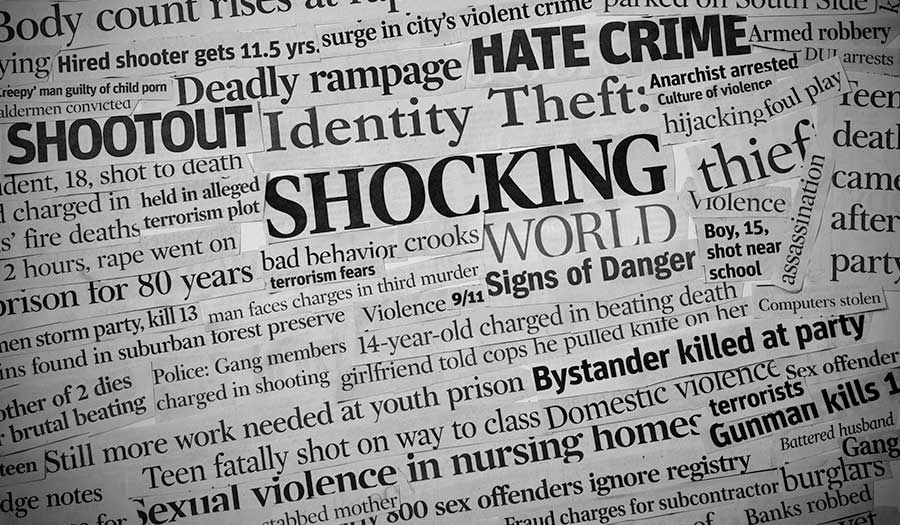 There is an ever-growing feeling toward the news these days. Call it what you may: burnout, numbness, strain, desensitization or outright apathy.

In the United States, people who feel overwhelmed by the 24/7 news cycle significantly outnumber those who are comfortable with it. According to a 2018 survey by the Pew Research Center, nearly “seven-in-ten Americans (68%) feel worn out by the amount of news there is these days, compared with only three-in-ten who say they like the amount of news they get.”

The little positive news we hear from time to time is not what is causing this. It is the unyielding avalanche of bad news that is nauseating citizens. There seems to be no end of headlines about political investigations, weather disasters, wars, terrorist attacks, tariffs, racial division, antibiotic-resistant superbugs, or whatever end-of-the-world scenario someone concocts.

As if that list was not bad enough, there has lately been a fresh wave of “post-truth,” untrue or fake news.

Another Pew study added to this: “Nearly two-thirds of U.S. adults (64%) say fabricated news stories cause a great deal of confusion about the basic facts of current issues and events. About a third of U.S. adults (32%) say they often see made-up political news online, while 39% sometimes see such stories and 26% hardly ever or never do. About half (51%) say they often see political news online that is at least somewhat inaccurate—a higher proportion than those who say they see news that is almost completely made up (32%).”

Of course, not all bad news is fake. But surely all fake news is bad, indeed worse than bad—it takes bad news fatigue to a whole new level of unbearableness.

There is also a perception of more news bias than ever before. A Gallup poll revealed that 66 percent of Americans feel news outlets do not do a good job separating fact from opinion. Realize 42 percent felt this way in 1984.

With all of this, you may just throw up your hands and disconnect—especially if you live in an affluent nation. In the West’s current booming economy, many enjoy relatively worry-free lives almost completely shielded from depressing news.

An unsound sense of security can set in. If negative events are not directly affecting you, it can be easy to think: “Why not save ourselves all that agony and just enjoy life? Why stress so much?”

Others swamped with busyness tend to think they have no time to keep up with current events and assume it is just “same old, same old.”

Day in and day out, newspapers, television anchors, internet sites and radio talk-show hosts deliver an endless stream of bad news. The cacophony can make you struggle to care about the latest earthquake, the latest political scandal, the child soldiers in central Africa, the impoverished families in your city…

This is news fatigue. While it is tempting to tune it all out, looking away from the madness can be more harmful than you realize.

For decades, David T. Z. Mindich has seen the dangerous trend of completely tuning out from the news. In his book, Tuned Out: Why Americans Under 40 Don’t Follow the News, he stated, “Older Americans are still reading newspapers and have been doing it all their lives. But the generational shift is severe: While more than 70 percent of older Americans read a newspaper every day, a habit they picked up in their youth, less than 20 percent of young Americans do so now…It used to be that most 25-year-olds, and certainly 35-year-olds, followed the news. But for the past few decades, most have not. Eighty percent of young people don’t read the newspaper today, and there is no evidence that they will read 20 years from now, either.

“It would be less troubling if the 80 percent of young people who do not read newspapers every day watched TV news or logged on to news Web sites. Most don’t.”

Mr. Mindich highlighted a sobering result: “While young Americans in past decades knew as much as their elders on a range of topics, this is no longer the case.”

Some years ago, the experience of a writer for The Australian proved Mr. Mindich’s worst fears had become reality: “The anniversary of the [2011] Christchurch earthquake reminded me that 48 hours after the disaster last year I asked my 17-year-old daughter, if she had any thoughts for her fellow Anzacs.

“She looked at me unknowingly.

“‘Are you aware,’ I said, ‘that your Kiwi brothers and sisters in the city of Christchurch have experienced a very serious earthquake which has devastated much of the city, and killed quite a number of its citizens?’ She continued to look at me quizzically.

“At this point I got angry. Not so much at her, but at the media life she leads. No newspapers, no evening news, no current affairs, no non-music radio…nothing that would provide a clue to any events that one would think should be of general interest.”

Not sure about his daughter’s ability to come out of her clueless state, the writer provided a diagnosis: “She is a monomedia consumer. Facebook seemingly provides her with all she needs to know.”

Yet younger generations are not the only monomedia consumers. Older adults are now also succumbing to this trend.

You do not want to be oblivious. Those who tune out lose sight of the fact that stories are made of real, life-altering events happening to real people.

For thousands of years, devastating events have occurred: the September 11 attacks, atrocities during World War I and II, the Great Depression, the Great Potato Famine, the Bubonic Plague, the Crusades, among others. Dead Sea core data even suggests evidence of ancient natural disasters comparable to mega-earthquakes.

“Looking farther back, one of the seismically active eras revealed by the core samples appears to have been about 4,000 years ago,” a researcher told National Geographic. “If you believe the biblical chronology, this is roughly [the time of] Sodom and Gomorrah,” he said. “During this period, according to the Book of Genesis, God ‘rained fire and brimstone from heaven, and destroyed all.’”

Regular readers of The Real Truth know we use biblical principles to explain current events and trends going on in the world. Using God’s Word as a lens to make sense of a confusing world is one crucial way to defeat news fatigue.

The Bible, itself a historical book, accurately documents that for millennia mankind has been unable to stop the tide of bad news.

The apostle Peter described how a man named Lot, while living in the same cities of Sodom and Gomorrah, was “vexed with the filthy conversation of the wicked: (for that righteous man dwelling among them, in seeing and hearing, vexed his righteous soul from day to day with their unlawful deeds)” (II Pet. 2:6-8). This means Lot made himself watch what was going on around him, no matter how painful. He forced himself to tune in to the bad news of his day.

The story of Lot in Genesis details that his conduct allowed him to be accounted worthy of deliverance. Only he and his daughters escaped a fiery disaster that destroyed those famous ancient cities.

Jesus Christ spoke of a similar time to come in the book of Luke. But instead of a localized disaster, He spoke of global trends: “When you shall hear of wars and commotions, be not terrified: for these things must first come to pass; but the end is not by and by” (21:9).

Christ described a tumultuous period of history to come before “the end.”

He said it would be a time of war—whether that be Syria, Israel and Iran, trade wars and so on. He also said it would be a time of commotions—such as unpredictable wildfires in California and Greece, Venezuela’s economic collapse, volcanoes going off in Hawaii and Guatemala, gang violence in Chicago, more than 31,000 people slayed in Mexico in 2017, immigration crises, and so on. He also told His audience to not give in to terror, which alludes to terrorist attacks or even the threat of an attack from a rogue nuclear state.

Though Jesus was talking to his followers almost 2,000 years ago about “these things,” the rush of bad news He foretold did not come in their time. It is coming on us, and it is looking more and more exactly as He described it.

Think. Almost 2,000 years ago, people did not have access to the news as we do now. There were no ancient newspapers, magazines, cellphones, TV, radio, or internet they could tap into for their daily news. How could they fully watch all that was going on around them?

Those cues had to be meant for those who would read His instruction today, in the context of what would be happening all around them. This means us!

Yet those who are hiding themselves from the news deluge are missing out on this crucial knowledge! Detecting Bible prophecy being fulfilled is what can motivate you to escape the far worse news that is coming.

Whether you are a novice news watcher or have succumbed to fatigue and want to change, there is a tool just for you.

How to Stay Alert

The writers and editors of the magazine you are reading understand—believe—Luke 21:9. We write relentlessly because the Bible foretold the tumultuous period occurring today. More important, God’s Word describes what is “the end” and how watching for it is vital. The Real Truth magazine is designed to help you do this!

Understanding the why behind current events should help you wake up and pay serious attention to the news with a sense of urgency—all while resisting the urge to tune it all out.

As sickening as the news can be, do not allow yourself to give in to the tendency to tune out, stop listening, or forget what is occurring around you.

Recall the Pew study that showed almost 70 percent of Americans feel worn out by bad news. According to the same study, the overwhelming feeling “is more common among those who follow the news less closely than among those who are avid consumers.”

In other words, the more superficially you watch, the more overwhelmed you will feel!

If you are a casual news watcher, it means these are pretty much the only stories you will see. It is easy to get sick of them!

By digging a little deeper, you will be more informed on the news topics and more easily see past the political drama.

Also, watching with “the end” in mind will give you clarity, vision and hope.

Start by educating yourself about what is “the end”—the very best news beyond the negative news occurring today. (Read What Is the Kingdom of God? to learn more.)

The Bible has much more to say on news events happening today, prior to “the end.” Knowing more about why world events are occurring will give true meaning to global trends and conditions. Also, using Bible prophecy as a guide, you can know what to watch—and what not to!

For a fuller understanding of soon-coming Bible prophecies, be sure to continue reading daily news postings on our site. Also, subscribe to our magazine at rcg.org/realtruth for bimonthly issues.

You do not need to be another victim of news fatigue. We can help you understand the why behind the headlines and make sense of all this awful news!