This website requires the use of Javascript to function correctly. Performance and usage will suffer if it remains disabled.
How to Enable Javascript
When the Police Are Sent Home...

When the Police Are Sent Home...

Budget cuts are leaving thousands of law enforcement officers in Western nations without jobs. How will this impact the lives of average citizens? 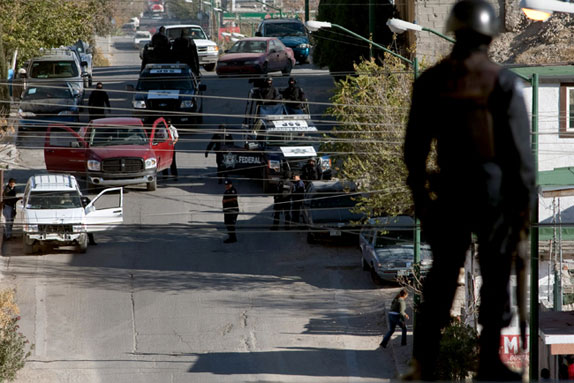 Jesus Alcazar/AFP/Getty Images
Thin Blue Line: Members of the federal police arrive at a crime scene after three members of the municipal police were killed in Ciudad Juarez, Mexico (Dec. 8, 2010).

You awake to the sound of breaking glass, shouts and screams. Stumbling toward the window, you realize the commotion is coming from your neighbor’s house. You pick up the phone and call emergency services. Naturally, you expect the police to quickly arrive.

Minutes pass. There are no sirens, no flashing blue and red lights, no crackle of police chatter on two-way radios. You wonder why they have not responded.

Pulling back a curtain, you watch intruders ransack your neighbor’s home, slowly coming to a horrifying realization: Is my family next?

The average person rarely thinks about the police (unless caught for a minor offense, such as breaking a traffic law), or ponders the meaning of the motto “to protect and serve” painted on squad cars throughout the United States. For generations, officers have always been there when needed: to keep traffic flowing during the lunch rush, sort out the aftermath of an automobile wreck, or check into a suspicious person prowling a neighborhood after dark.

Yet this may soon change. The global financial crisis has created a government budget crunch, which has affected law enforcement agencies. Less money to spend means fiscal cutbacks, which translate into layoffs and a reduced police presence. Frontline officers—those who patrol the streets and respond to 911 calls—are often the first to go.

With sweeping budget cuts certain, cities in prominent Western nations will have to adapt to the reality of life with fewer police on patrol. What impact will this have on individual lives? And more important, what will these cutbacks reveal about society itself?

Across the United States, record numbers of law enforcement and public safety employees are being laid off due to budget shortfalls. Already, police fatalities nationwide have jumped 37 percent over the previous year.

New York City, which reduced its force by 4,685 officers in 2010 and plans to cut 3,150 more by 2011, saw homicides jump 22 percent and shootings 14 percent. In Manhattan alone, robberies increased by 14 percent and burglaries by 19.8 percent. There has also been a noticeable rise in nearly all other reported crimes, including rape, prostitution, drug sales and car thefts.

The Associated Press reported that Craig Floyd, the director of the National Law Enforcement Officers Memorial Fund, said officers are being asked to “do more with less.”

“There is a more cold-blooded, brazen criminal element prowling the streets of America today,” Mr. Floyd said. “These people have a lack of respect for human life, and they don’t think twice about killing a cop. They pose a real threat to our law enforcement officers” (ibid.).

In Oakland, California, one of the nation’s most violent cities, 25 percent of police officers were laid off due to a $42 million dollar budget gap, forcing prioritized dispatch responses.

“If you come home to find your house burglarized and you call, we’re not coming,” an Oakland Police spokesperson said in USA Today. As a result, some residents have begun to call police stations in neighboring districts.

In Miami, Florida, over 100 officers were laid off. Likewise, in crime-plagued East St. Louis, Illinois, leaders approved a measure to reduce the number of officers by 30 percent. The Tulsa, Oklahoma, department cut 110 officers and no longer responds to calls about larceny, fraud and car theft. In Michigan, where there are only 24 officers per 10,000 people, law enforcement authorities have to prioritize work, while knowing that they may not have backup officers to assist them should a dangerous situation arise.

San Diego’s police chief, who cut $15.9 million from the 2011-12 budget, warned reporters the cutbacks are “threatening the very lifeline of safety in the city of San Diego. And that public safety is (in danger of) being sacrificed as we speak” (KFMB-TV).

America is not the only country at risk for a crime wave due to financial turmoil. Across the globe, law enforcement chiefs must make similar fiscal slashes.

United Kingdom: The Sussex Police Authority is slated to remove some 500 officers and a similar number of support staff over the next five years in an attempt to save roughly $80 million.

“I think we live in difficult times and we have some dark, dark days ahead,” Councilor Godfrey Daniel stated in the Hastings & St. Leonards Observer. “I cannot be enthusiastic about this…People are crying out for more officers on the beat.”

Australia: The Sydney Morning Herald reported that the New South Wales police force is expected to recruit fewer officers as it attempts to meet proposed budget cuts of more than $250 million.

Canada: About 2,500 Montreal officers protested against recent cuts. The demonstrators alleged there is a severe backlog of fraud claims and that sexual assault victims are told their cases will be looked into “as soon as possible” (Montreal Gazette).

Scotland: Budgets may be cut by as much as $136 million (the equivalent of losing about 2,808 police officers). Scottish Police Federation General Secretary Calum Steele fears the proposal will cost more in the long run: “Crime levels would increase, as would the fear and cost of crime, and there would be a big knock-on effect on costs to the National Health Service, the courts, social work and other agencies” (The Daily Record).

None of these situations have yet spiraled completely out of control, as the budget cuts are still hypothetical or have only just gone into effect.

What does a city look like without the rule of law? Look no further than Mexico’s Ciudad Juarez. A drug war has turned this border town from tourist attraction to world murder capital in a handful of years.

The city of 1.5 million people, which has been directly involved in a gang turf war for years, demonstrates the effect of a city that has lost the ability to enforce law and order.

In 2008, Mexico’s government sent 10,000 soldiers to squelch narcotics gang violence and police corruption. The army focused on the most pressing matter, stopping the cartels, and did not regularly investigate other crimes. As a result, kidnapping, extortion, car theft and robbery rates have skyrocketed.

The Miami Herald article “In Mexico’s Ciudad Juarez, Murder Is a Way of Life” stated:

“Residents hunker in trepidation. Most answer cellphone calls only from people they know to avoid random extortion attempts. Instead of going out on the town, they hold private parties—and only with close friends.”

The peace and safety from the rule of law are gone. While police officers were once there to protect and serve, now gang members will “protect”—but only if their extortion demands are met.

Without peace, the economy suffers: “People are afraid to go out into the street, so the restaurants are doing badly,” a Mexican architect told The Miami Herald. “You don’t go out to eat. You go to the mall, which has more security.”

“Six thousand businesses have closed during the last nine months,” the head of the local branch of the National Chamber of Commerce told the newspaper. Closed shops mean many thousands without jobs.

In a lawless land, lives are cheap, with some hired killers murdering for as little as $25 a head, according to law enforcement officials (ibid.).

“On another day, after a hit squad in the Erendira district executed a man, a radio report said children in an adjacent park ‘kept on playing,’ paying no heed to the slaying” (ibid.).

Whether the cause is a failing drug war or budget crisis, a decrease in law enforcement inevitably leads to lawless disorder. Crime increases. Murder, rape and torture become commonplace and regularly go unpunished. Robbery, drugs and prostitution become a large part of the “economy.” Protests turn into full-scale riots.

It is the ultimate “while the cat’s away, the mice will play” scenario. With no fear of repercussions, most will do whatever their heart desires—no matter the consequences.

In the end, without law and order, one thing will be on display: raw human nature.

Many think what is occurring in Juarez will never happen in prominent Western nations.

Consider, however, that without a police presence, New Orleans quickly spiraled into lawlessness and disorder in the wake of Hurricane Katrina.

Some took advantage of the situation, ransacking and looting entire neighborhoods. Out of desperation for food and drink, most did whatever they deemed necessary to survive. For example, in the Louisiana Superdome, which housed thousands of Katrina refugees, crime was rampant. A desperate sense of “every man for himself” prevailed. Without police, human nature—exhibited through vanity, jealousy, lust and greed—rears its ugly head.

If people can no longer rely on consistent policing, many will question their desire or need to follow the law. Some might ask themselves, If no one else cares, why should I?

Once laws are no longer enforced, many will simply do as they please, creating a vicious cycle whereby criminal lawlessness continually increases.

People in Western nations miss that when policemen enforce law and order, the true capabilities of human nature remain hidden.

To learn more about the depths of the human condition, read The Real Truth Personal by editor-in-chief David C. Pack, “What Is the Origin of Human Nature?”