This website requires the use of Javascript to function correctly. Performance and usage will suffer if it remains disabled.
How to Enable Javascript
Sex – Right Purpose in a Wrong World!

The real meaning behind marriage and sex is beyond the bounds of human imagination.

The world has been ignorant of the true purposes of sex. The result has been untold pain and suffering for the masses! This near epidemic of misery is measured in disease, new kinds of perversion, unwanted pregnancies, often yielding abortions, illegitimate children or unwanted children in marriage, skyrocketing divorce rates, which in turn produce corresponding numbers of jumbled families, bankruptcies, court battles and even crime.

Tragedy, unhappiness and confusion about sex and marriage have afflicted every nation of the world for thousands of years, and people have not known where to turn for the answers—the solutions—to so many ill effects.

But what has not been known is that there is a vital missing dimension to marriage and sex.

The world is now drenched—in fact, drowning—in a deluge of sex, with much or most of it having no connection to any real meaning or right purpose. More than ever in history, all mankind is awash in every conceivable sexual pleasure, fantasy, perversion and pursuit—in or out of marriage, and with fewer people any longer making a distinction between the two.

Most have no idea there even is a purpose for human existence. Believing himself to be merely the highest of the animals in an evolutionary chain, man has remained in the dark, completely unable to see a reason for sex, or for human beings existing as men and women. Yet there is an awesome purpose for humanity collectively—and you personally!—and, when fully understood, it is inseparable from the purposes of sex and the marriage institution.

Man was created after the God kind—in His image and likeness. Notice: “And God said, Let Us make man in Our image, after Our likeness.” The account continues: “male and female created He them. And God blessed them” (Gen. 1:26, 28).

This passage makes God the Author of sex, and the sole authority on it. Sex is a product of God’s design and creative forethought, and is not, as some religionists think, a mischievous stunt in which the devil somehow “marred” God’s otherwise perfect Creation. Just as He had done with every other aspect of His Creation, God concluded that male and female—including sex!—were “very good.”

We offer a book unlike any other about this subject. Titled Sex – Its Unknown Dimension, it is filled with information about:

To learn about the true meaning of sex, watch The World to Come broadcast “Sex – Right Purpose in a Wrong World!” at rcg.org/worldtocome. 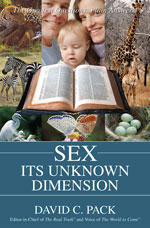