This website requires the use of Javascript to function correctly. Performance and usage will suffer if it remains disabled.
How to Enable Javascript
Gordon Brown – British Prime Minister

Who is Gordon Brown? A workaholic politician? Or dedicated family man? An austere, hard-line, unilateral prime minister? Or a champion for uniting nations to tackle the world’s most pressing problems? 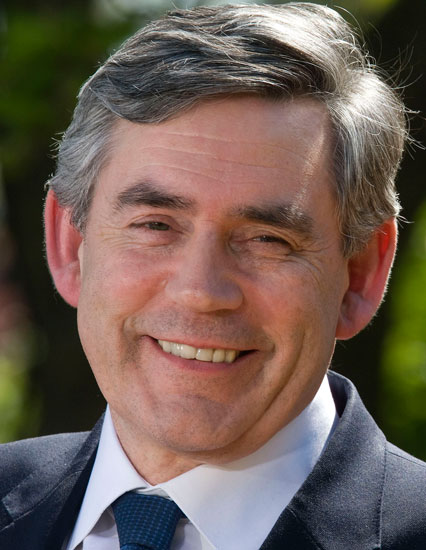 “Has there even been a more enigmatic politician than Gordon Brown?” The BBC asked this in an opening subhead for an article covering Mr. Brown after he was chosen as the next British prime minister.

In the same article, the BBC said the public paints Mr. Brown as a “dour, self-absorbed figure, a ‘control freak,’ who has spent more than a decade coveting the job of his more charismatic Downing Street neighbour [Tony Blair].” Yet his family and friends attest he is “warm and generous and engaging.”

Even after Mr. Brown has been in office for over a year, The Economist seemed equally perplexed: “Can the prime minister who had sunk beneath criticism into ridicule really be the same man who, last week, called for the world to emulate his bank-rescue package, and saw the world obey? Which is the real Mr Brown?”

Son of a Scottish Minister

Before beginning his ongoing, nearly 40-year run in British politics, Gordon Brown was born in Glasgow Scotland in 1951. His father, Dr. John Ebenezer Brown, was a minister in the Church of Scotland. Gordon Brown is the middle son of three children, with an older and younger brother.

Mr. Brown proved ambitious at a young age. After hearing one of their father’s sermons on the humanitarian crisis in Africa, the Brown brothers began a paper, The Gazette, which the boys wrote and printed themselves, donating the proceeds to help the African cause.

The young Gordon Brown excelled at sports and in his studies, and played in the school orchestra. He was on a fast-track education program and graduated from Kirkcaldy High School as the leading scholar of his year, going on to Edinburgh University at 16 years old.

During his first term at the university, Mr. Brown lost sight in both eyes, only later regaining 30% use in his right. He was diagnosed with detached retinas, thought to be caused by a kick to the head during a rugby match.

Despite being out of class for most of his first term, Mr. Brown’s brush with total blindness had a substantial impact on him.

“It made him more determined,” his older brother, John, told the Daily Telegraph. “He was in more of a hurry; he feared he might lose his sight altogether. It was a bleak time.”

After a productive time at Edinburgh, where he was editor of the school paper and was Rector, the third-highest position at the university, presiding over the University Court, Gordon Brown graduated in 1972 with First Class Honors, receiving his Master’s Degree. From 1976 to 1980 he was a lecturer in politics at the Glasgow College of Technology, and completed his doctorate in 1982.

After a few political defeats and time working as a television journalist and producer, a 32-year-old Gordon Brown won a seat in Parliament representing Dunfermline East and soon fell in with another newcomer to the Labour Party, 30-year-old Tony Blair.

Both Messrs. Blair and Brown were frustrated by the condition of their party, which was being torn apart by in-fighting and dwindling in influence in Parliament. The pair was soon inseparable, accompanying one another on foreign trips, using each other as a sounding board for ideas and writing speeches for one another.

Labour leader Neil Kinnock soon recognized their potential and added them to his shadow cabinet (an alternate cabinet for the government selected by the opposition party). As they rose, both politicians saw their hopes to modernize the party begin to be realized.

But 1994 saw Mr. Brown pitted against Mr. Blair for the leader of Labour, following the death of party leader John Smith. Rather than engage in a brutal battle for the position, Gordon Brown promised to back Mr. Blair, in return for conditions never made public.

With Tony Blair as prime minister, following a landslide Labour Party victory, the new Chancellor of Exchequer Gordon Brown (a position similar to Secretary of Treasury in the United States) extended the Treasury’s influence into nearly every area of domestic policy.

After years as a bachelor politician, Mr. Brown married Sarah Macaulay in 2000. The couple has two sons.

He continued as Chancellor until becoming prime minister following Mr. Blair’s resignation in July 2007. The biography provided on Mr. Brown’s website summarized those 10 years: “As Chancellor of the Exchequer, Gordon Brown presided over the longest ever period of growth. He also made the Bank of England independent and delivered an agreement at the Gleneagles Summit in 2005 to support the world’s poorest countries and tackle climate change.”

Upon taking office, the new prime minister inherited the unpopular War on Terror and, domestically, a country at the cusp of an economic downturn.

From early in his premiership, Mr. Brown has struggled to appease a wary public, his every move scrutinized. For example:

The prime minister’s ratings worsened after the September culmination of the banking crisis, which saw stock markets drop and governments forced to step in to prop up mismanaged banks. A mid-April poll by YouGov published in the Sunday Times showed Mr. Brown’s “personal rating has plunged further and faster than any other British leader since political polling began in the 1930s.”

Mr. Brown’s ratings fell from plus 48 last August to minus 37 (on a zero midpoint scale) at the time of the poll.

Additionally, the YouGov poll showed a drop in support of the Labour Party down to 28%, with the Tories at 44% and the Liberal Democrats 17%. It was even rumored Mr. Brown’s own party had plans to oust him.

Only months later, the pendulum of Mr. Brown’s ratings swung back to 35%, according to a November 2008 Ispos MORI poll, apparently bolstered by his handling of the credit crisis. However, despite the swing, the poll found that 59% of Britons were still dissatisfied with his leadership.

The week after the U.S. Presidential elections, Mr. Brown gave a speech at the Lord Mayor’s Banquet outlining a plan to bring financial stability back to the global markets, calling the crisis “a chance for the world to work together.”

“While I see a world that is facing financial crisis and still diminished by conflict and injustice, I also see the chance to forge a new multilateralism that is both hard-headed and progressive,” he said.

The prime minister also urged unity on tackling other major global crises. “And I believe that in our international cooperation on finance, climate change, terrorism and ending conflict, there is evidence of this new multilateralism at work in the world—fairer, more stable and more prosperous because it is rooted in cooperation and justice.

“And if we learn from our experience of turning unity of purpose into unity of action, together we can seize this moment of profound change to create, for the first time, the age of the truly global society, one where progressive multilateralism, not narrow unilateralism, is the norm.”

Mr. Brown’s financial rescue plan has seen positive responses, though slightly hesitant, even from the media that had panned him only months earlier.

The Daily Mail wrote that “short-term favour is with Mr Brown, whose confidence has been boosted, although he will now need to translate his ‘man for a crisis’ image into credible plans for the long term.”

With the surprising turn in public opinion, The Independent responded: “Mr Brown is firmly out of the woods—for now. Any talk of getting rid of him from No 10 would be laughed out of court among most Labour backbenchers.”

The positive response to the financial plan even prompted a New York Times op-ed columnist to semi-seriously ask, “Has Gordon Brown, the British prime minister, saved the world financial system?”

Mr. Brown appears to have the world’s attention and continues to improve in popularity at home—all this in stark contrast to his first year-plus in office.