This website requires the use of Javascript to function correctly. Performance and usage will suffer if it remains disabled.
How to Enable Javascript
The Russian Bear Awakens!

Skirmishes between the Republic of Georgia and two of its breakaway provinces resulted in a cross-border conflict with the Russian Federation—an internal dispute that risks reviving the Cold War. After two decades of silence in world affairs, Russia has awakened, showing the world it is a formidable force. 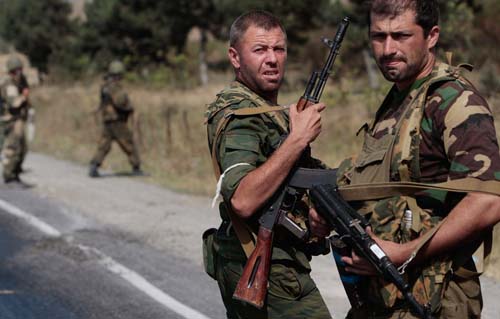 Not long after the fall of the Berlin wall came the collapse of the Union of Socialist Soviet Republics (USSR). In subsequent years, Russia, being self-subsistent with energy resources, was pushed aside in a world frantically moving ahead, driven by energy demand and technological advances.

Over the next two decades, the world was lulled into thinking the “Red Bear” had permanently gone to sleep.

Yet the recent events in Georgia show that while the West thought Russia was eliminated from the world scene, it has become a key player in the formation of the European Union. The Georgian conflict shows that the Russian Federation will not hesitate to retaliate if challenged at its borders, and its reaction serves as a warning to any who threaten its interests.

The era of Perestroika (economic restructure) and Glasnost (openness) begun by Mikhail Gorbachev in the mid-1980s forced Russia into a period of restructure to adapt and become a partner in world affairs. This reform process was not as successful as expected, and was followed by the fall of the USSR. Subsequently, former Russian territories Poland, Ukraine and Georgia moved toward independence, preferring to become pro-West rather than continuing to pledge allegiance to Russia. The so-called “death of communism” brought an end to the Cold War and Russia watched its former satellite states move toward aligning with the North Atlantic Treaty Organization forces (NATO). At first, Russia isolated itself in the process of internal restructure and stood by while America set up missile defense systems at its front door. However, Russia remained focused on undoing what Perestroika initiated, and rebuilt a military powerhouse.

The August 2008 Georgian conflict has roused the Russian bear, which over the past two decades has become a key supplier of energy to Western Europe. Russia has now positioned itself to be virtually untouchable in any of its actions against its neighbors, as any response by the U.S. against Russia will be strongly condemned by the EU, which looks to Russia for its much needed supply of energy.

Georgia has been historically unstable from its beginning due to being a trade link between Europe and India. The Greeks colonized Georgia in the sixth century B.C. and was split into two regions: Colchis in the west and Iberia in the east.

In the fourth century B.C., the two regions were merged, with the capital being Mtskheta. Christianity was instated as the official state religion in A.D. 327 by Iberian King Mirian III.

The Persian and the Byzantine empires vied for control of the area until the seventh century, when Georgia was conquered by the Arabs. In the 11th century, the Seljuk Turks took control and Georgia was not reunited into a kingdom until the reign of King David “The Builder” in the 12th century. In the 1200s, the kingdom was overtaken by Mongolians. Thereafter, it remained in the control of Iran and the Ottoman Empire until the mid-1700s, when it once again was proclaimed a kingdom.

AFP/Getty Images
What does the future hold?: Russian President Dmitry Medvedev (left) meets with presidents Eduard Kokoity of South Ossetia (right) and Sergei Bagapsh of Abkhazia (center) at the Kremlin in Moscow.

In 1783, Russia obtained control of Georgia’s foreign affairs, and in 1801, when its king abdicated, Georgia became part of the Russian Empire.

From around 1800 to 1878, Russia waged numerous wars against Turkey and Iran, which resulted in several territories annexed to Georgia.

On May 26, 1918, in the midst of the Russian Civil War, Georgia declared its independence from Russia. But their independence was short lived. Just six years later, Russian rule was reestablished.

Shortly before the collapse of the Soviet Union in 1991, Georgia again declared its independence, and elected its first president, who was soon deposed in a bloody coup d’état. The country was caught up in a civil war, which lasted until 1995. That year, the regions of Abkhazia and South Ossetia became involved in a dispute that led to ethnic violence; some 250,000 Georgians were ethnically cleansed from Abkhazia.

AFP/Getty Images
Demonstrations in Georgia: Citizens protest against Russia’s military action in Georgia, at a checkpoint near the village of Odzisi.

On August 7, 2008, a conflict developed in which Georgia, the two unrecognized republics of South Ossetia and Abkhazia, and the Russian Federation took part. The fighting started because Georgia began clamping down on Russian-linked separatists. The next day, fighting resulted in South Ossetians fleeing into Russia to escape the Georgian onslaught. During the week, sporadic fighting continued, including a sniper war.

On August 11, after Georgian forces began to retreat, Russia claimed that its troops at Tskhinvali were still under fire and began to proceed into Georgia, in what was viewed as a move by Russia to overthrow the Georgian government. After many years of silence, Russia adamantly showed by means of force that it will not tolerate unrest on its border.

In doing so, Russia sent a strong message to the world.

As promoter of democracy worldwide, America chooses to support Georgia because it is one of the few governments in the region that has been democratically elected. It has also supported the United States in the Middle East by contributing troops to the war in Iraq. U.S. President George W. Bush, in response to the conflict, said that “Russia has invaded a sovereign neighboring state and threatens a democratic government elected by its people. Such an action is unacceptable in the 21st century.”

Still, Western countries did not intervene in the conflict and only commented as to what actions should be taken in dealing with the situation. Outside interference in the Georgian conflict could have seriously affected the much needed oil supply flowing through its territory from Baku in Azerbaijan, through Georgia, to the Turkish port of Ceyhan in the Mediterranean. The pipeline of 1,100 miles provides 1.2 million barrels of oil to Western Europe and countries in the east. Closing this pipeline would drive up an already high oil price, and could soon affect the UK and other Western democracies.

Reaction from the European Union was non-decisive and it was clear that it was not going to stir in a situation that could undo the economic treaties being established with Moscow. In current world conditions, the EU cannot afford to go against Russia as it relies on its energy resources coming from Russia through the Balkan states. Rather than confront Russia on what seems the mundane issues of Georgia, Europe seeks better ties with the former Soviet Union in securing energy resources for the European Union. Meanwhile, Europe is also faced with Georgia seeking to become a member of NATO. The future will show which priorities will take precedence.

Nations in the region include various descendents of the Persian and Median empires, which (according to the world’s bestselling book, the Bible) will play pivotal roles in the future. The ancient Medes in these modern times represent much of southern and central Russia. The discovery of oil in these countries 100 years ago began a rivalry between Britain and Russia for control of the region. By supporting the nation with weapons, Russia has won the battle of gaining Iran’s support.

In a silent way, Russia has continued the Cold War by supporting those who pose a threat to Western democracies. Amid ongoing efforts by the West, Iran (with the help of Russia) is fast becoming a nuclear entity, posing a threat to world stability.

As the sleeping bear recovers from slumber, it, in alliance with Iran, could at the right time cripple the West by cutting off the much needed supply of oil.

Over the past 6,000 years of history, man has been doing what he thought was right to solve his problems, but is unable to find the way that leads to peace. “There is a way which seems right unto a man, But the end thereof are the ways of death” (Prov. 14:12).

The annals of history record war upon war as the only way man turns to in order to get peace. But this way has never brought lasting peace and only escalated the problem which today threatens to destroy all human life from the planet. “And except those days should be shortened,” prophecy warns, “there should be no flesh saved [alive]; but for the elect’s sake those days shall be shortened” (Matt. 24:22).

As man moves closer to the most terrible time in earth’s history, he has lost sight of what is to happen due to his inability to govern himself.

The prophet Jeremiah gives a stern warning to today’s leaders: “For the pastors [leaders] are become brutish [dull-hearted], and not sought the Lord…O Lord, I know that the way of man is not in himself: it is not in man that walks to direct his steps” (Jer. 10:21, 23).

Humanity is approaching the fulfillment of earth-changing prophecies about to occur, as foretold in Matthew 24. It will involve many players on the world scene—including the “Russian Bear.”