This website requires the use of Javascript to function correctly. Performance and usage will suffer if it remains disabled.
How to Enable Javascript
The Environment and Humanity’s Future

The Environment and Humanity’s Future

• Lessons From Easter Island
• The Coming War for Earth’s Resources
• Is Going Green the Answer?
• The Environment, Dwindling Resources and Mankind’s Survival 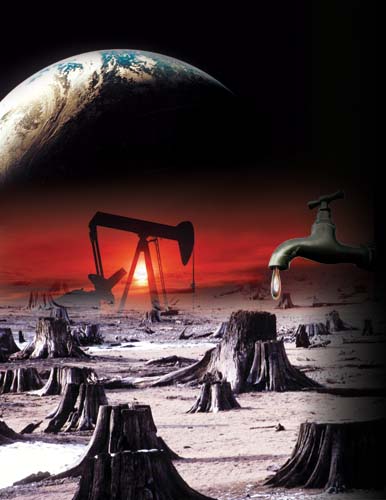 A four-part series about the environment and humanity’s impact upon it: Think of all the issues that could be addressed—the efforts, theories and competing ideas that could be analyzed—and, after all is said and done, the many different ways this series could conclude.

The article “Lessons From Easter Island” presents a historic example of what happens when human beings take the environment for granted, indiscriminately stripping the planet of its natural resources, bringing society to the brink of collapse. History also shows that man refuses to learn from the past, thus repeating disastrous patterns—ultimately on a global scale.

In “The Coming War for Earth’s Resources,” we look at today’s landscape: The world population is increasing to disastrous proportions. And with China and India, two of the most populous countries on earth, emerging as First World nations, there are too few natural resources available to maintain the industrialized, high-tech, “Me first” lifestyles that billions wish to copy from the West. In addition, cities continue to absorb surrounding towns and suburbs, transforming into burgeoning megacities that encroach upon farmlands and wildlife areas. These and other factors are contributing to a future scenario of global violence as peoples and nations clash over food, water, oil and other disappearing necessities of life.

Then, in our article “Is Going Green the Answer?” we look at the efforts offered to solve the situation before things grow worse.

Finally, in “The Environment, Dwindling Resources and Mankind,” we ask, How did humanity come to this point in the first place—and what will be its final outcome?

The Coming War for Earth’s Resources – How It Will Change the World!
Consider activities most take for granted, particularly those who live in industrialized nations: drinking a glass of water; driving a car or traveling by mass transportation; living in a decent house or apartment; using modern household appliances; using tools to build, fix and repair; even breathing fresh air. These activities improve our quality of life. Indeed, some are vital to our very existence.