This website requires the use of Javascript to function correctly. Performance and usage will suffer if it remains disabled.
How to Enable Javascript
Is Going Green the Answer?

Is Going Green the Answer?

Many consider eco-friendly practices as the way to solve mankind’s environmental issues. But is this realistic? 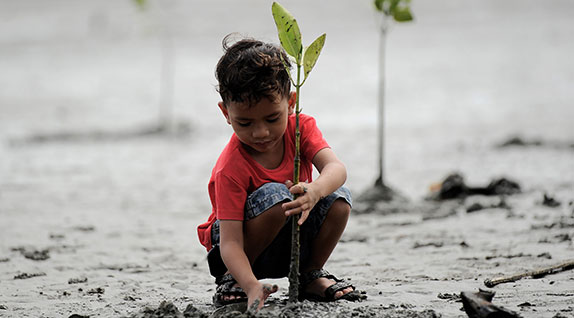 More than half of Earth’s 37 largest aquifers are being depleted. Americans throw out one-third of their food per year. Ocean life has been cut in half since 1970 due to overfishing. These are a few of the issues raised by those who advocate “going green”—those who believe that the average man or woman lives a life of excess and should practice more sustainable lifestyles.

Given the degradation of the environment, it makes sense. The list of terrible statistics goes on and on: The world is at risk of overpopulation as it is 7.5 billion and expected to surpass 9.7 billion by 2050—the number of wild animals on Earth decreased by half in the past 40 years—the world has already lost 80 percent of its forests, equal to 1,000 football fields of forest per hour for the last 25 years.

Amid the flood of bad environmental news, you may be compelled to ask, Am I doing my part?

There are websites through which you can take a test to see how many “Earths” your lifestyle consumes. These ask about your car, job, eating habits, etc., and reveal whether you are living a sustainable lifestyle. Even if you are living under the global average, you still are reminded, “We only have one Earth.”

Everywhere you turn, there is another company compelling you to buy its product because it is “energy efficient,” “eco-friendly” or “sustainable.”

Over the years, most of the green movement’s progress has been made at an individual level. People switch from personal vehicles to buses, trains or bicycles as their primary means of transportation. Some fit the roofs of their homes with solar panels, buy organic foods, or do something as simple as flushing the toilet less often. They help increase awareness by volunteering for vocal green organizations or supporting environmentally friendly politicians.

The desire to live in harmony with nature is, of course, where going green gets its name. Those who support it believe that no one owns the Earth—no one has the right to destroy and take from it as he pleases. Instead, they believe that man must live within the means of nature and always consider the effect his actions have upon the environment.

It can seem that being eco-friendly and sustainable are among the only ways to solve mankind’s environmental issues. But has humanity already pushed Earth past its limits—or is there still time to change course if people come together and act quickly?

“Since the early 1970s, humanity has been demanding more than our planet can sustainably offer,” it stated. “By 2012, the biocapacity equivalent of 1.6 Earths was needed to provide the natural resources and services humanity consumed in that year. Exceeding the Earth’s biocapacity to such a degree is possible only in the short term. Only for a brief period can we cut trees faster than they mature, harvest more fish than the oceans can replenish, or emit more carbon into the atmosphere than the forests and oceans can absorb. The consequences of this ‘overshoot’ are already clear: habitat and species populations are declining, and carbon in the atmosphere is accumulating.”

The report summarized what was necessary to change the situation: “To maintain nature in all of its many forms and functions and to create an equitable home for people on a finite planet, a basic understanding must inform development strategies, economic models, business models and lifestyle choices: we have only one planet and its natural capital is limited.”

Those who strive to live sustainably tend to look to nature for inspiration. They see the equilibrium present and attempt to disrupt it as little as possible.

One example is harvesting methane gas from garbage dumps. This is done by placing a membrane, generally made of clay, over the waste. Pipes are then inserted so the methane gas can be transported and used to create electricity or heat homes—all from gas that would otherwise be burned off by landfill owners and further pollute the atmosphere. Even after a landfill is closed, it can still produce methane for 15 to 20 years. This process, if widely implemented, is considered a step toward repurposing waste and relying less on fossil fuels.

Drop in the Bucket

While living sustainably makes sense on paper, and seems plausible on the individual level, there is a problem. The global economy is based on growth. Growth means consumption. Lack of growth is considered moving into recession.

The West’s standard of living is a prime example of this consumption mentality. Those who lead more comfortable lifestyles automatically accrue substantial waste. Although some are trying to change this, the overall percentages of how much success has been achieved are low.

A few years ago, an opinion piece in The New York Times summarized the problem with going green on an individual level: “You reduce, reuse and recycle. You turn down plastic and paper. You avoid out-of-season grapes. You do all the right things.

“Just know that it won’t save the tuna, protect the rain forest or stop global warming. The changes necessary are so large and profound that they are beyond the reach of individual action.

“You refuse the plastic bag at the register, believing this one gesture somehow makes a difference, and then carry your takeout meal back to your car for a carbon-emitting trip home.

“Say you’re willing to make real sacrifices. Sell your car. Forsake your air-conditioner in the summer, turn down the heat in the winter. Try to become no-impact man. You would, in fact, have no impact on the planet. Americans would continue to emit an average of 20 tons of carbon dioxide a year; Europeans, about 10 tons.”

The article made the point that, even if the pope got all one billion Catholics to reduce their carbon emissions to zero overnight, pollution would still be rising globally.

Again, all of this would have to happen globally—and fast.

Instead of thinking solely for profit, here and now, the world’s governments and corporations would have to consider how their actions would affect the environment in 30 to 50 years. Cities would have to retro-fit buildings to make them green. Renewable energy sources, such as solar and wind power, would have to be implemented on a massive scale.

One road block to all this is that many of the technologies to make all this possible are still decades away from existing. This means that, even if governments unanimously decided to go green, the true impact would take dozens of years at best.

While the green movement may look good and make people feel they are doing their part, it cannot remain a grassroots movement to be effective. Individual efforts are simply not enough.

Another road block: Truly going green would mean the world’s governments would have to collaborate to identify the problems—and quickly implement effective solutions. Political leaders would have to set aside war, economic growth, and historic rivalries, and together make environment the top priority.

All this does not address the sheer amount of money needed to make the global economy eco-friendly. The figures would be astronomical. Who is willing to pay the price?

Going green is a large investment now, with potential payoffs in the future. The global mindset of immediate gratification would have to change. People would have to think of future generations, while taking responsible actions today.

Even though the green movement has worked on minute scales, governments, mindsets and ethics would need to be drastically altered to fully accommodate this sort of thinking. Applying worldwide sustainability requires a complete change of mind.