This website requires the use of Javascript to function correctly. Performance and usage will suffer if it remains disabled.
How to Enable Javascript
The Coming War for Earth’s Resources – How It Will Change the World!

The Coming War for Earth’s Resources

How It Will Change the World!

Consider activities most take for granted, particularly those who live in industrialized nations: drinking a glass of water; driving a car or traveling by mass transportation; living in a decent house or apartment; using modern household appliances; using tools to build, fix and repair; even breathing fresh air. These activities improve our quality of life. Indeed, some are vital to our very existence.

Have you considered that to do all of the above requires the availability of natural resources, whether used as raw materials or in finished products?

The subject of natural resources has been in the news for years. The media has long reported that the world’s supply of oil, minerals, fresh water, and lumber are in danger of running out. Yet few take this seriously.

As earth’s resources are being depleted, nations are competing for what remains. This is leading to great conflicts. Eventually, the severity of the problem will cause nations to take drastic measures to ensure continued access. It will change the world in which we live!

The United Nations projects that the global population will increase from the present 6.65 billion to 7.95 billion by the year 2025. At the same time, the world is becoming more prosperous. The average person is consuming more food, water, energy and metals. Multiple millions in nations that were once poor are now moving into the middle class. This includes growing numbers of China’s 1.3 billion citizens and India’s 1.1 billion. They are driving cars, acquiring household appliances, using electronic gadgets and adopting high-protein diets, similar to Western industrialized nations.

Population growth and growing prosperity have driven the skyrocketing demand for natural resources. Demand has outpaced supply to the extent that the prices of key resources such as oil, minerals and commodities have risen dramatically. Increasing demand is putting a strain on sorely needed resources.

The availability of fresh water is essential to human life, necessary for consumption, agriculture, industry and sanitation. Over two-thirds of earth’s surface is covered by water. Yet only 2.5% of it is fresh; the remainder is salt water, which is not readily usable. Added to this, about 70% is contained as ice at the North and South Poles, with most of the remainder being in the soil as moisture or in deep underground aquifers inaccessible to man. This means that less than 1% of all fresh water on earth is accessible to man.

Over the past 40 years, water withdrawals from rivers and lakes have doubled due to increasing populations and industrial use. Humans now use 40% to 50% of all natural freshwater. Within the next 50 years, the world’s population is projected to rise by 40% to 50%. This growth, coupled with increasing industrialization and urbanization, will result in greater demand for water, thus straining the supply of this limited resource.

Today, many of the world’s greatest rivers—the Nile in Egypt, the Yellow River in China, the Indus in Pakistan, the Rio Grande and Colorado in the U.S., the Murray in Australia and the Jordan in the Middle East—run dry long before they reach the sea. Many of the major rivers are shared by two or more countries in arid or semi-arid areas:

This interdependence creates a fertile ground for conflict.

As populations increase, water will become more scarce, increasing tensions. UN figures suggest that there are around 300 potential conflicts over water all over the world. According to the World Health Organization (WHO), about one-sixth of the world’s population lacks access to clean water, while 40% are without access to proper sanitation services.

Competition for water has grown so serious that at the World Economic Forum in Davos, Switzerland, UN Secretary-General Ban Ki-moon warned, “A shortage of water resources could spell increased conflicts in the future…Population growth will make the problem worse. So will climate change. As the global economy grows, so will its thirst. Many more conflicts lie just over the horizon” (Inter Press Service).

With the price of oil over $100 USD per barrel and rising, there is a growing consensus among experts that the days of cheap oil are finished. And with our technologically sophisticated, urbanized world, the demand for oil has never been greater. Oil accounts for 43% of the world’s fuel consumption, and 95% of this is used for transportation.

The U.S. Department of Energy has estimated that global oil consumption will increase from 77 million barrels per day in 2000 to 110 million in 2020—an increase of 43%. If this analysis proves correct, some 670 billion barrels of oil will be consumed during that time or about two-thirds of the world’s known oil reserves.

While it is likely that new reserves will be found, it is unlikely that supply will be able to keep up with demand, particularly with soaring energy use in Western societies and the emergence of economic giants China and India.

It is estimated that in up to 54 of the largest 65 oil-producing nations production of oil has peaked and is now in decline. This includes the U.S., Indonesia, Australia, nations along the North Sea, and Mexico. What is of concern is that much of the oil being produced today is the heavy-sour crude (indicative of the bottom of the well), not the light-sweet crude (at the top). According to U.S. Assistant Energy Secretary Alexander Karsner, “the places where oil can be found and extracted and brought to bear in the world are declining. It will get harder, and demand will outstrip supply for probably the rest of my lifetime” (Commodity Online).

As nations look for new supplies, some of the most promising sources lie in offshore areas that are fiercely contested. This includes the Caspian Sea, the Persian Gulf, the Red Sea, the Timor Sea and the Gulf of Guinea. Even in areas where reserves are not in dispute, there are concerns about future availability because of political and social unrest, war or outright hostility of the governments. This includes countries such as Algeria, Indonesia, Nigeria, Sudan, Iran, Iraq, Venezuela, Colombia, Angola and Saudi Arabia.

The search for oil is causing countries to develop new alliances, such as China’s funding of African development, the U.S. and European forays into the former Soviet republics of Central Asia, and Japan’s interest in the oilfields of Siberia.

Potential hotspots include the Persian Gulf, Sudan, Venezuela, Nigeria, the Caspian Sea, Chad, Algeria, Angola and the South China Sea. These areas contain about 80% of the world’s oil supply.

Minerals that are so vitally important for industry are in short supply in the major industrialized societies of Europe, the United States, China and Japan. They are heavily dependent on raw materials from other countries, especially Africa, a continent rich in natural resources. Africa possesses vast wealth in strategic, precious and base metals, including 99% of the world’s chrome, 85% of its platinum, 68% of its cobalt and 54% of its gold. Africa has become an arena of competition among America, China, India, France and Britain.

The fight for control over natural resources such as minerals, timber, oil and diamonds has fuelled brutal civil wars in the Democratic Republic of Congo, Angola, Sudan, Ivory Coast, Sierra Leone and Liberia. For example, mineral rich Congo holds millions of tons of metals, including diamonds, cobalt, uranium, gold, manganese, and niobium. It has the world’s largest supply of high-grade copper and coltan (used in cellphones and fiber optics). At its height, conflict in Congo between 1998 and 2003 drew in seven foreign armies and claimed 2.5 million lives.

Timber is another resource in high demand, due to heavy deforestation around the world. It has fueled some of the world’s most brutal wars in countries such as Cambodia, Sierra Leone, Ivory Coast, Congo, Myanmar and Liberia.

High concentrations of minerals and timber are in areas that will likely be hotly contested: the diamond fields of Angola, Congo and Sierra Leone; the copper and gold mines of Congo, Indonesia and Papua New Guinea; the emerald mines of Colombia; the forests of Brazil, Fiji, Liberia, Mexico, the Philippines, Cambodia, Congo, Brunei, Indonesia, Malaysia and Borneo.

The Hunt for Resources

Many nations consider the sourcing and securing of resources a high priority, even a matter of national security. It is driving foreign policy, particularly among the most powerful players. In this high-stakes endeavor, governments are forging new alliances as they scour the globe seeking precious resources. And the resource rich areas of Africa, the Middle East, Australia, Canada and Central Asia are the targets.

Other articles in this series:

Lessons From Easter Island
The collapse of this small Polynesian island stands as a stark reminder to those exploiting the earth’s natural resources.

Is Going Green the Answer?
Severe drought, global food shortages, strip-mining, the destruction of rainforests—these are a few of the issues raised by the green movement.

The Environment, Dwindling Resources and Mankind
A four-part series about the environment and humanity’s impact upon it: Think of all the issues that could be addressed—the efforts, theories and competing ideas that could be analyzed—and, after all is said and done, the many different ways this series could conclude.

Fight to the Finish

The fight for earth’s resources has begun. The battle lines have been drawn, and the contestants have suited up. As nations compete for resources, national tempers will flare-up.

How will it end?

A superpower will soon arise in Europe, a union of ten nations, and will play a key role in world events at the end of the age. When it emerges, it will go into Africa and the Middle East, subjugating many of the countries there (Dan. 11:41-43). A key reason for this will likely be to secure those regions’ vast oil and mineral wealth.

These two superpowers will eventually assemble near Jerusalem in a final showdown for world domination—a final world war that would eradicate human life if it were not cut short (Matt. 24:21-22).

(For more information, read the following literature posted at rcg.org: Tomorrow’s Wonderful World – An Inside View!) 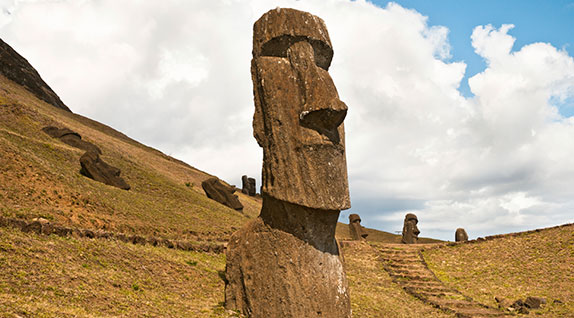 Easter Island’s Collapse – A Cautionary Tale for Mankind
The fate of the small Polynesian island stands as a stark reminder of the outcome that can result when wrong choices are made.