This website requires the use of Javascript to function correctly. Performance and usage will suffer if it remains disabled.
How to Enable Javascript
Benazir Bhutto (1953-2007) – Her Life Ended for a Government She Believed in

Her Life Ended for a Government She Believed in

In the wake of the former prime minister’s violent death, governments and societies can expect senseless bloodshed and carnage to escalate!

She would let nothing stand in her way. Not the assassinations of family members, not charges of government corruption or removal from office, or self-imposed exile—or even death threats. She was a staunch advocate for a government she believed in, and was more than willing to risk her life for it.

On December 27, 2007, former Prime Minister Benazir Bhutto was assassinated by a suicide bomber as she exited a public campaign rally in Rawalpindi, Pakistan. The bombing, which took place in a crowded park, killed at least 20 people and injured several others.

It was originally reported that Ms. Bhutto was leaving the rally when an unidentified gunman on a motorcycle shot her in the neck and chest and then detonated a bomb as she stood in an open-top jeep. (The next day it was learned she was not shot.) Terrified supporters screamed and scrambled for cover while others frantically searched for loved ones among the mutilated bodies strewn on the ground after the blast. Ambulances and emergency personnel circled around the smoky remains of the former prime minister’s vehicle, quickly assessing the carnage while trying to find others who had been hurt.

Ms. Bhutto was rushed to the hospital for emergency surgery, but was reported to have died in the ambulance on the ride there. She was officially pronounced dead at the hospital.

Both a military spokesman and representative of Ms. Bhutto’s political party, the Pakistan Peoples’ Party, confirmed her death.

Ms. Bhutto’s violent death came after decades of surviving rejection from government opponents, threats of violence, failed assassination attempts and other obstacles. No matter what she faced, she supported a form of government she believed would be best for her people.

Earlier this year, Ms. Bhutto survived an assassination attempt when a suicide bomber attacked her cavalcade during a welcome parade held in her honor; over 130 people died. She had returned to Pakistan from an eight-year self-imposed exile after being granted amnesty by current President Pervez Musharraf.

“We have to modify our campaign to some extent because of the suicide bombings. We will continue to meet the public. We will not be deterred,” said Ms. Bhutto shortly after the October suicide bombings during the procession welcoming her home.

On the day of her death, as she campaigned for the January elections, she acknowledged concern for her safety to the crowd who had gathered to hear her speak. “I put my life in danger and came here because I feel this country is in danger,” she told the rally before she was killed. “People are worried. We will bring the country out of this crisis.”

At the news of her death, former Prime Minister and political opponent Nawaz Sharif expressed his remorse outside of Rawalpindi General Hospital, where she was pronounced dead. “My heart is bleeding and I’m as grieved as you are,” he said amidst anti-Musharraf chants from grief-stricken Pakistanis. 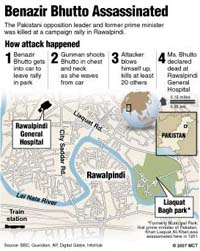 Ms. Bhutto, 54, and a graduate of Harvard and Oxford, was backed by both Washington and London. She was a key member in the Pakistan Peoples’ Party and had twice served as Pakistan’s Prime Minister between 1988 and 1996.

She was the daughter of Zulfikar Ali Bhutto, one of the most democratically minded prime ministers in Pakistani history (who was taken from power and executed). Ms. Bhutto was the first female prime minister of a Muslim country, holding the position for two separate terms. But she was removed from office due to allegations of corruption.

In the preface of the second edition of her autobiography, Daughter of the East, Ms. Bhutto wrote, “I didn’t choose this life, it chose me.”

“Born in Pakistan, my life mirrors its turbulence, its tragedies and its triumphs. Pakistan is no ordinary country. And mine has been no ordinary life.”

Ms. Bhutto was on a campaign to restore democracy to Pakistan—drawing many death threats from terrorist groups. With her assassination, the January elections are now in question, possibly to be postponed.

“We repeatedly informed the government to provide her proper security and appropriate equipment, including jammers,” Mr. Malik said, “but they paid no heed to our requests.”

The district police in charge of security for the event had called their security plan “foolproof.”

Nations across the globe were shocked by the news of the attacks, concerned that progress toward democracy would be disrupted, and that national unrest would destabilize nuclear-armed Pakistan. They also feared the act would ignite more terrorist activity in the region.

U.S. Deputy State Department spokesman Tom Casey said, “Certainly, we condemn the attack on this rally. It demonstrates that there are still those in Pakistan who want to subvert reconciliation and efforts to advance democracy.”

“I am deeply shocked by news of the latest attack in Rawalpindi which has claimed the life of Benazir Bhutto and killed at least 15 other people,” said British Foreign Secretary David Miliband in a written statement, also saying that Bhutto “knew the risks of her return to campaign but was convinced that her country needed her.”

German Chancellor Angela Merkel also condemned the attacks as “cowardly,” saying that the attacks targeted the “stability and democratic process of Pakistan.”

The Vatican spokesman Reverend Federico Lombardi said, “One cannot see signs of peace in this region.”

British Prime Minister Gordon Brown said Ms. Bhutto had “risked everything in her attempt to win democracy in Pakistan and she has been assassinated by cowards who are afraid of democracy.”

“Benazir Bhutto may have been killed by terrorists,” he said, “but the terrorists must not be allowed to kill democracy in Pakistan. This atrocity strengthens our resolve that terrorists will not win, there, here or anywhere in the world.”

In a letter to Mr. Musharraf, French President Nicolas Sarkozy called the attack an “odious act” and said “terrorism and violence have no place in the democratic debate and the combat of ideas and programs.”

Though Benazir Bhutto’s life was so violently and suddenly taken, she established a legacy of boldly facing and surmounting obstacles. She was a survivor, a woman who felt deeply that democracy would bring success to her fellow Pakistanis. She died for a form of government she strongly believed in.

Throughout history, others have died for a government they strongly believed in—“a city which has foundations, whose builder and maker is God” (Heb. 11:10). That utopian government, otherwise known as the kingdom of God, will soon be established on earth. The freedom, abundance and success that Ms. Bhutto and countless others through the years have longed for will become a reality. It will give humanity the laws, statutes and judgments necessary for universal peace and prosperity to spread to—and thrive in!—all nations. That world-ruling supergovernment, established on earth at the Return of Jesus Christ, will give direction, true purpose and meaning to all institutions and systems: economies, education, marriage, family, religion, etc.

But before God’s government is established, certain prophetic events must occur.

When His disciples asked Him about the sign of the closing of this modern age, Jesus Christ warned, “Take heed that you be not deceived: for many shall come in My name, saying, I am Christ; and the time draws near: go you not therefore after them” (Luke 21:8).

Where is the world going? Why is it filled with problems, troubles, evils and ills, causing unhappiness, confusion and misery of every kind? What lies ahead? Is there hope for a different—and truly better—world? Yes! A wonderful world—unlike anything ever seen—is coming. Its arrival is certain. This book presents an inside view of what it will be like!

Today what do we see across this world’s religious landscape? Thousands of differing, competing and disagreeing churches, denominations and movements, all claiming to be led by Christ. Yet Jesus Himself said that His Body—His Church—could not be divided.

Christ also told His disciples, “But when you shall hear of wars and commotions [including acts of terrorism], be not terrified: for these things must first come to pass; but the end is not by and by” (vs. 9).

Man can expect more wars, more terrorism, more senseless bloodshed and carnage to erupt—and escalate. Jesus said that as these horrific events occurred and intensified, something else would unfold: “And this gospel of the kingdom shall be preached in all the world for a witness unto all nations; and then shall the end come” (Matt. 24:14). The parallel account of Mark 13 states, “And the gospel must first be published among all nations” (vs. 10).

That gospel message, foretold to be published to all nations at the end of the age—the same message Jesus proclaimed throughout His ministry: “The time is fulfilled, and the kingdom of God is at hand: repent you, and believe the gospel” (Mark 1:15)—is being published today! It can be read daily on this website and in the vast literature library of books, booklets and other material at rcg.org. 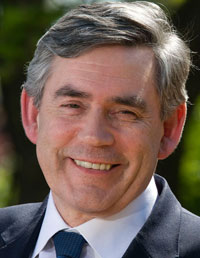