This website requires the use of Javascript to function correctly. Performance and usage will suffer if it remains disabled.
How to Enable Javascript
Inside Myanmar – Part 5: The Only Solution

Part 5: The Only Solution

As the affluent and destitute exist in a mire of ongoing despair under the fallible laws and governments of men, another government—a perfect world-ruling administration—will soon be established. 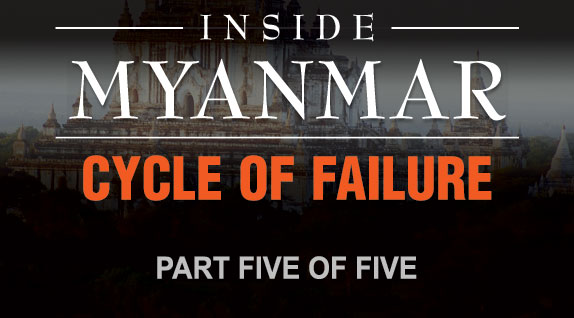 Myanmar is not the only country struggling with misery and despair. This universal struggle is shared, to varying degrees, with every nation on earth, in every society and across all levels.

In places such as Sudan’s Darfur region and the Democratic Republic of Congo, systematic rape and torture are commonplace, with victims ranging from 90-year-old women to innocent little toddlers. We live in a world in which monsters do not exist only in fairy tales; they are alive and well, and treat fellow human beings in ways that even the wildest beasts do not treat other animals.

In the affluent nations of the West, teens throw away their innocence in exchange for premarital sex, changing sex partners as easily as changing one’s socks. They abuse their minds and bodies with alcohol, illegal drugs and medication without restraint. They live their lives in an endless cycle of chasing after momentary pleasures and emotional "highs," afterward suffering a long, hard crash—only to return to the spiritual vomit of substance abuse and sexual depravity. They are trapped. They are miserable. And they are ignorant of the only way that will set them free.

If history is an indication of future trends, the chaos and confusion that exists in every one of mankind’s governments and societies will only grow worse. From First World moral degeneracy and corruption to nightmarish Third World realities, man is ensnared in a cycle of failure that must be broken—and soon!—else "there should no flesh be saved [alive]" (Matt. 24:22).

When faced with hopeless situations, people tend to blindly gravitate toward the latest leader or newest government. (In Myanmar, for example, many are looking to Dr. Aung San Suu Kyi, Oxford-educated leader of the National League of Democracy, to lead their nation to an optimistic future.) However, it usually does not take long for this hope to be dashed when the next administration fails to bring lasting solutions—they never do! The cycle then repeats itself, as the people search for the next great hope on the horizon.

Even the greatest of history’s leaders have not permanently solved man’s ongoing troubles. The reason humanity has failed to break free from this cycle is because there is an unknown dimension—the only path to true understanding—that is absent in man’s vast knowledge. Human beings solve physical problems with physical solutions. But the ills plaguing humanity are spiritual in nature—and can only be solved spiritually.

The Bible is God’s instruction manual to mankind, and it answers life’s greatest questions: Who are we? Where are we going? What is the ultimate purpose for our existence?

The solutions to humanity’s spiritual problems are found only in God’s Word, which contains vital knowledge man cannot discover by his own intellect or through experimentation. In the case of Myanmar and all other nations, the problems of governments are spiritual. Human beings do not possess the ability to govern themselves and produce universal peace, prosperity, harmony and abundance. They do not understand "that the way of man is not in himself: it is not in man…to direct his steps" (Jer. 10:23).

For the past 6,000 years, mankind has experienced wars and conflicts—between nations, between governments within nations, between corporations, between neighborhoods, between next door neighbors. Scholars, historians and political thinkers believe the causes are complicated. But the Bible teaches otherwise: "From where come wars and fightings among you? Come they not hence, even of your lusts that war in your members? You ask, and receive not, because you ask amiss, that you may consume it upon your lusts" (Jms. 4:1-3).

Human beings lust—covet—after things possessed by others. And they will do anything to get what they desire: go to war to seize another country’s natural resources, slaughter the helpless in the name of religion, launch cutthroat corporate takeovers, smear a man’s reputation with false charges, commit adultery, etc.

The purpose of government is to establish and administer law. Yet the laws of men have utterly failed to bring equity, justice and fairness across all levels of civilization. Only spiritual laws can do this! And only leaders who are led of God’s Spirit and who have developed godly character can be trusted to administer such laws—the Law of God, which is spiritual in nature (Rom. 7:14) and is fulfilled through the way of love (13:8-10), the way of selfless, outgoing concern for others.

God’s Word states that a future world Leader will establish and administer such a government, but the masses are looking for Him in the wrong places. This Leader is Jesus Christ. As Head of both state and Church, the returning Christ will establish a unified world-ruling supergovernment. Notice: "For unto us a Child is born, unto us a Son is given: and the government shall be upon His shoulder: and His name shall be called Wonderful, Counselor, the mighty God, the everlasting Father, the Prince of Peace" (Isa. 9:6).

An incorruptible King, Christ will direct His supergovernment—the kingdom of God—to teach humanity true family values. Place educational institutions upon the right foundation. Empower true religion to provide guidance and purpose to empty lives. Maintain a global economy that will never see a depression or even a recession. Ensure that government on all levels—local, national and international; executive, legislative and judicial—will be free of bureaucracy and corruption. And convert all weapons of war into instruments of peace that will serve a greater purpose (Isa. 2:4).

God's government will not be based on the way of get, as evident among all nations today, but rather on the way of give. It will dispel chaos and confusion, replacing these with order, structure and peace.

Only when the government of God is finally established on earth will the people of Myanmar—as well as all nations—find the hope, peace and prosperity billions today so desperately seek. The kingdom of God is coming—and soon!