This website requires the use of Javascript to function correctly. Performance and usage will suffer if it remains disabled.
How to Enable Javascript
Inside Myanmar – Part 2: Greed, Self-Interest and Destruction From Within

Part 2: Greed, Self-Interest and Destruction From Within 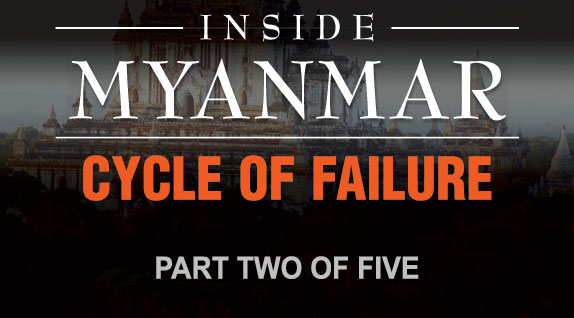 Disturbing reports of Myanmar’s alarming descent into chaos have taken center stage in the daily news media and have finally captured the world’s attention.

The recent arrests and increased violence toward pro-democracy protestors under the guise of restoring peace and order is nothing new to other countries, especially those in the region. With vivid images of students and peaceful monks being met with unprecedented government force in Rangoon, nations around the world can no longer turn a blind eye to Myanmar’s troubles.

Yet the shocking imagery and stories reported in news publications and nightly television news sound bites are only the tip of the iceberg of the real horrors taking place.

Before the effects can be examined, the cause of the unfolding crisis must be clearly identified for what it is: greed fueling hunger for continued power and control.

How have the oppressive tactics affected the lives of 55 million citizens? What has been the human toll of government leaders holding on to power at all cost?

Beginning in 1996, the Burmese army launched a systematic plan to root out armed rebels and all other resistance to governmental control. The plan, known as the “four cuts,” was aimed largely at the ethnic minority Karen and Shan peoples in the north. The goal was simple: Cut off food, money, intelligence and eliminate potential new recruits for the pro-democracy movement.

The results have been decisive and the human toll devastating.

Over the course of the past decade, junta-led soldiers have destroyed more than 2,500 villages in Myanmar. According to the Thailand-Burma Border Consortium, a non-governmental agency that works closely with the United Nations, over 200,000 refugees are living in ten separate camps inside Thailand alone. Shockingly, some estimates indicate that ten times this number have found refuge there illegally. Millions more are estimated to have sought shelter in neighboring Bangladesh, China and India.

Having managed to escape to the camps, refugees are relatively safe, and provided with basic necessities such as food, shelter in small huts and basic education for their children.

Nevertheless, this is by no means a “life,” especially compared to the standard of living enjoyed in the prosperous nations of the West. Some refugees have spent as long as ten years in the camps, originally intended to provide only a temporary solution. Furthermore, camp residents are often allowed only one short visit per year outside the barbed wire fences. Although a safe haven, the camps are more like prisons. Thousands exist in these ongoing miserable conditions, wondering if a permanent solution will ever be found.

The current chaos in Myanmar has proved to be fertile ground for a burgeoning practice: human trafficking. Up to 300,000 women and children per year are kidnapped in Southeast Asia and shipped to large cities, where more than 60% are forced to work as “sex workers.” The most susceptible targets are young women from the poorest Southeast Asian nations, such as Myanmar and Vietnam.

Due to the internal violence-induced confusion, certain “industries” in Myanmar are booming economically. An October 2007 United Nations report stated that the country’s share of the world opium market collapsed from 63% to 6% between 1998 and 2006. Yet, in the last 18 months, there has been an “alarming” resurgence in the cultivation of opium in the nation.

According to the U.S. Drug Enforcement Administration, Myanmar once again accounts for over 80% of the entire heroin grown and distributed in Southeast Asia, “…entrench[ing] Myanmar’s position as, by far, the world’s second largest opium producer,” the UN report noted.

The World Health Organization has reported that diseases such as Tuberculosis and HIV/AIDS are increasing at a frightening rate within Myanmar. In conjunction with these findings, the UN Office on Drugs and Crime has noticed a marked increase—and a clear connection—between the drug trade routes running into and out of Myanmar and an increased incidence of HIV/AIDS cases due to the rapidly expanding narcotics trade.

Many refugees have said the Myanmar military has gone to great lengths to persecute Christians, often raping Christian women and destroying churches.

The list of ongoing oppression, misery and despair continues to grow. Perhaps most telling is human rights organizations estimate that since Burma gained its independence in 1948, ethnic conflicts and genocide have claimed approximately 600,000 lives.

Despite failing to find solutions, the junta continues to decry any indication that the international community should intercede, emphatically stating the government’s continued determination to carry out its seven-step “road map” toward establishing a future democracy. However, it has been ten years since the launch of this plan—and only the first step (drawing guidelines for a future constitution) has been completed.

This lack of any real efforts toward establishing a democracy has drawn the ire of most commentators, who view the junta’s actions as a ruse to remain in power. This becomes a self-fulfilling prophecy: The junta insists that pro-democracy demonstrations, which have “forced” the government to arrest and detain thousands, are the real reason behind the seven-step plan’s lack of progress.

As all efforts to find peace from within seem destined to fail, hope for the people of Myanmar lies outside its borders. Will it be found in the disagreeing governments throughout the international community? Can others come to a consensus after decades of unproductive “summits” and bickering?