This website requires the use of Javascript to function correctly. Performance and usage will suffer if it remains disabled.
How to Enable Javascript
Inside Myanmar – Part 4: Democracy’s Cycle of Failure

Will emerging as a democratic state be enough for Myanmar to overcome its internal problems? 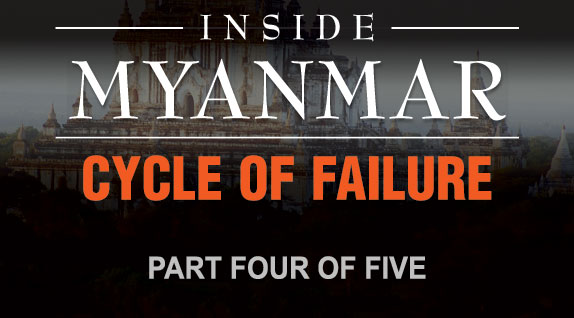 The world is watching with increased anticipation in hope that Myanmar’s once-budding democracy will emerge from national turmoil, and usher in peace, liberty and abundance to the oppressed.

Religion: Approximately 70% of the country’s 50 million citizens practice Buddhism, with 4% practicing traditional Christianity and another 4% observing Islam. In past years, the military regime has persecuted professing Christians and Muslims.

Language: Although Burmese is the official national language, more than 100 distinct languages and dialects are spoken and recognized.

Race and ethnicity: The population is comprised of an estimated 135 distinct ethnic groups.

Living conditions: Some live in abject poverty in northern jungle villages; others reside in large metropolitan areas such as Rangoon, which has about five million residents.

Diversity is widely celebrated and all but deified in the democracies of the West. However, with Myanmar’s various religions, ethnic groups and languages—and the competing interests and factions these bring—reaching a consensus on any issue is next to impossible. In a perfect world, diversity can yield multiple benefits, IF diverse groups unite under and move as one toward an overarching purpose.

However, we do not live in a perfect world.

Ultimately, a diverse democratic society will take one of two paths: degenerate morally and socially, exchanging long-held values for political correctness—or become a caldron for competing socio-religious and ethnic schisms.

In one of his most powerful indictments of Myanmar’s military regime, President George W. Bush said, “Burma’s rulers continue to defy the world’s just demands to stop their vicious persecution…They continue to reject the clear will of the Burmese people to live in freedom under leaders of their own choosing.”

If a new democratic government is installed, news images of protests and government crackdowns will be replaced with images of demonstrators dancing in the streets and quiet jubilation of monks—but will this bring universal happiness to the oppressed? Will democracy find a way to end Myanmar’s cycle of failure and despair?

Although Westernized governments and their leaders are often able to identify the problems facing humanity, and democratic societies provide the freedom to speak out against injustices, they lack the capacity to bring about lasting solutions. This inability to find answers to the biggest problems facing mankind leaves citizens of every nation dissatisfied and frustrated with their governments’ executive, legislative and judicial systems.

British Prime Minister Sir Winston Churchill, one of history’s greatest leaders, summed up the sad paradox of the democratic system: “Democracy is the worst form of government, except for all the others.”

The next quote (usually attributed to Alexander Tyler, circa late 1700s), while pertaining to the fall of the Athenian republic, gives unique insight into the cycle of failure all democracies are doomed to repeat: “A democracy cannot exist as a permanent form of government. It can only exist until the voters discover that they can vote themselves money from the [public treasury]. From that moment on, the majority always votes for the candidates promising the most money from the [public treasury], with the result that a democracy always collapses over a loose fiscal policy followed by a dictatorship. The average age of the world’s great civilizations has been two hundred years. These nations have progressed through the following sequence: from bondage to spiritual faith, from spiritual faith to great courage, from courage to liberty, from liberty to abundance, from abundance to selfishness, from selfishness to complacency, from complacency to apathy, from apathy to dependency, from dependency back to bondage.”

If this pattern holds true, then every democracy today lies somewhere in this cycle of failure—and each is in the process of failing. Whether it is Pakistan, perched on the brink of outright disaster—Venezuela, which is hurtling toward becoming a socialistic totalitarian state—or Iraq, which is at the beginning of the democratic cycle—all modern democracies are destined to return to bondage.

Yet if democracy—“the worst form of government, except for all the others”—cannot solve humanity’s growing troubles and ills, then what form of government can usher in the security, abundance and success—personal, national and world wide—that all long for?