This website requires the use of Javascript to function correctly. Performance and usage will suffer if it remains disabled.
How to Enable Javascript
Inside Myanmar – Part 3: The Driving Force Behind International Response

As Myanmar races to model itself after North Korea in seeking to develop nuclear technology, how will the world's leading governments respond? 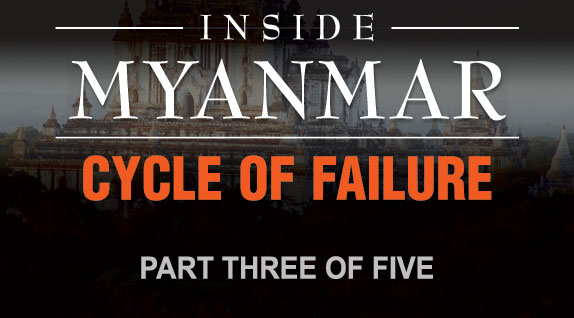 This month, special UN Ambassador Ibrahim Gambari traveled to Southeast Asia on a six-nation tour to guide the region to a resolution. First, he met with Myanmar’s junta leader, General Than Shwe, to express the world’s indignation toward recent events, specifically the government’s violent response to demonstrators and Buddhist monks. Next, he traveled to Malaysia, urging the ten-member Association of Southeast Asian Nations to be more proactive in stopping the violence.

Vocal ire from diplomats around the world regarding Myanmar’s state of affairs is nothing new. The question remains: Will any government take definitive action to resolve the “Myanmar problem?” Or will the international community maintain the status quo?

Failed attempts in the past at securing peace are possibly the best indicator for what the future holds.

The powerful nations of the region and world have the ability militarily, economically and diplomatically to pressure the junta into reform—if they are unified under one banner. However, each country and organization is motivated by a different set of priorities primarily driven by the same things—greed and self-interest!

For instance, neighboring China has witnessed firsthand Myanmar’s unfolding crisis. Yet Beijing refuses to speak against the junta for its brutal reprisals, and vehemently opposes economic sanctions.

Simply put, China’s government sees Myanmar as a financial windfall for reaping enormous economic benefits. For example, China has negotiated with the junta for future favored treatment involving access to Myanmar’s oil and gas reserves. Ankara News recently reported that China is the leading partner in a new natural gas pipeline project that will net the junta $83 million.

In addition, Beijing provides a steady flow of its outdated tanks and fighter jets to Myanmar’s military regime—which in turn grants China access to ports and listening posts along Myanmar’s coast.

Each year Myanmar’s forests are stripped of tens of thousands of tons of valuable timber to fuel China’s forest export industry (worth $17.2 billion in 2005). The ancient jungles have been so over-harvested during the last 20 years that it has become difficult for Chinese loggers to locate available forest for harvesting.

Like China, Russia has also had a tremendous impact on Myanmar. A Russian foreign minister recently stated, “Urgent steps must be taken to prevent the escalation of tensions,” resulting from the increasingly aggressive demonstrations in Rangoon, which have begun to spill across Myanmar.

Myanmar has become a “gold mine” for Russia’s government and its private enterprise—and, not surprisingly, Moscow opposes even the most limited economic sanctions against the former Burma.

And then there is India, which is also competing for access to Myanmar’s natural resources. India has quietly become Myanmar’s fourth-largest military partner, supplying the junta with tanks, light artillery, aircraft and small arms.

Indian Prime Minister Manmohan Singh recently stated, “Violence and suppression of human rights is something that hurts us. Having said that, we have to recognize that Myanmar is our next door neighbor and sometimes it does not serve the objective you have in mind by going public with condemnations.”


The prime minister’s statement reflects India’s balancing act of trying to embrace the value of democracy in the region while capitalizing on the economic benefits of maintaining a good relationship with Myanmar’s military regime—two positions simply not in accord.

In recent years, Japan has sought to distance itself from an unsavory past of wartime atrocities. Seeking to make the most of an opportunity to reiterate its commitment to democracy and human rights, Tokyo is quite vocal in opposing the Myanmarese government’s actions. Japan has limited economic ties with Myanmar.

Other Southeast Asian nations such as Malaysia and the Philippines have become more active in advocating for liberty, freedom and democratic rights. However, they lack the diplomatic or economic weight to exact any real change.

Meanwhile, the junta looks to the example set by North Korea, taking preliminary steps toward “going nuclear.” The military regime is seeking to persuade Russia and China that it can be trusted with nuclear technology for producing inexpensive and cleaner power for the Myanmarese people—even though Myanmar possesses rich fossil fuel reserves. Despite the junta’s record, odds are in its favor that it will eventually achieve its objective.

Although Western intelligence has confirmed the government's goal of developing ballistic missiles, American efforts to economically isolate Myanmar, as with North Korea and Iran, has had limited effects due to lack of cooperation from Myanmar’s neighbors.

Elsewhere, the 27 member-states of the European Union are incapable of agreeing on how best to move forward. Consequently, the EU—lacking a strong leader at its helm—has taken no significant action, other than condemning the junta and “calling for change.” Will future national crises similar to Myanmar’s stir Europe to unify under a strongman?

There is one policy upon which each nation, government, association and union seems to agree: the pursuit of self-interest, individual organizations and governmental body working toward its own end!

As governments around the world position and maneuver for gain, power and influence in Myanmar, there is no real hope that security and prosperity will find its way to the citizens of this crumbling nation—not unless there is a sea change in thinking. Put more simply, each nation’s focus on what it can get from Myanmar—as opposed to what each can give—undermines any possibility for lasting peace and harmony in the region.

If democracy does somehow miraculously emerge from the internal confusion, will Myanmar’s cycle of failure and oppression end? Or will a powerful force not yet in play be needed to end the cycle?