This website requires the use of Javascript to function correctly. Performance and usage will suffer if it remains disabled.
How to Enable Javascript
The Virginia Tech Massacre – Making Sense of the Carnage

Making Sense of the Carnage 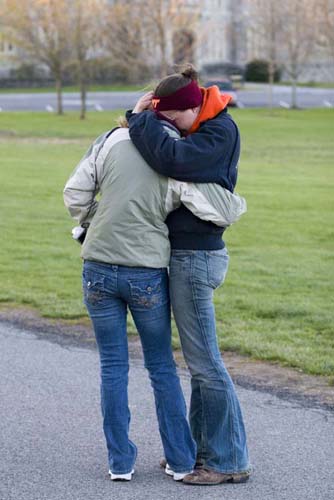 MCT
Two Virginia Tech students console each other on their way to the campus chapel the day following the April 16 shooting rampage that left 33 people dead.

On the morning of April 16, 2007, all eyes were on Virginia Polytechnic Institute and State University as the events of the deadliest school shooting in America’s history played out—an act committed by a then-faceless gunman. The nation watched for hours as the body count continued to rise, finally resting at 33.

There were news interviews with confused and shaken students quietly recounting the ordeal. On-the-scene cellphone camera images of the almost surreal event—sounds of gunshots—swat teams swarming around the area. The victims’ names and faces ceaselessly displayed for days. Soon, self-taken videos and photographs of the gunman gave the public a glimpse into the mind of the one who committed this heinous act.

Vigils were held for the victims. Families began to mourn. But in a short time, most will realize that life for staff and students at Virginia Tech, as well as for the rest of the nation, will go on.

Only days after the tragic event, people looked to place blame on someone, something—anything that could be held responsible for the bloodshed. In hindsight, they scrutinized decisions that were made and the warning signs of the troubled student-killer; many are offering their opinions on how things could have been done differently. Some sincerely ask, “How can we prevent this in the future?”

Thousands are looking for hope and healing, with some meditating on the state of the nation, and others looking forward, trying to find a way to achieve a world in which such appalling violence never occurs.

The Real Truth magazine examines and explains tragic events from a unique perspective—through the spiritual lens of the Bible, offering the “big picture” as to why such events happen, and what to expect in the future.

In the following series of articles, The Real Truth—using the plain truths found in the Scripture—provides answers most readers have never heard before, truths not expressed by the world of traditional religion. Because these are unlike anything ever taught, most readers may find the following articles upsetting. What we present here is good news, along with a sobering warning. Proceed at your own discretion.

Making Sense of the Carnage:

Just Ahead!—Healing, Comfort and Recovery Worldwide!
One student. Two handguns. Thirty-three dead, including the gunman. It happened so quickly. That Monday morning, students and faculty woke up thinking they would accomplish certain things that day. But caught in the snare of a murderer, their plans, and their lives, abruptly ended.

Is Anyone Safe?
“Shootings Remind Us No Place Truly Safe”—“Virginia Tech Violence Shatters Sense of Security for Peaceful Town”—these and other news headlines appeared soon after the April 16 carnage at Virginia Tech.

A Bloody Day, A Blood Nation
It’s not supposed to happen here!, thought millions of Americans. Iraq, certainly. Elsewhere in the Middle East and parts of Asia, Africa and other regions of the world, definitely. But not here!