This website requires the use of Javascript to function correctly. Performance and usage will suffer if it remains disabled.
How to Enable Javascript
A Bloody Day, A Bloody Nation

A Bloody Day, A Bloody Nation 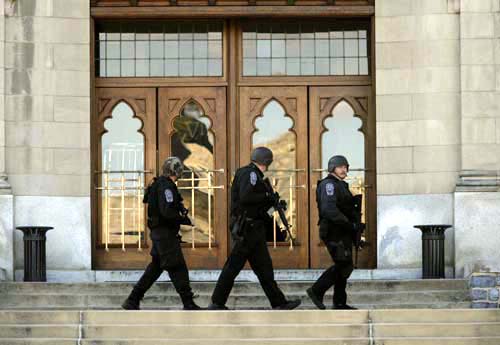 MCT
Police officers patrol the front steps of Virginia Tech’s Burruss Hall, which is next to Norris Hall, where 32 people were killed and more were injured.

It’s not supposed to happen here!, thought millions of Americans. Iraq, certainly. Elsewhere in the Middle East and parts of Asia, Africa and other regions of the world, definitely. But not here!

No one expects to be gunned down in a college classroom; no one anticipates being murdered in the hallway of his campus dormitory—certainly not in the most powerful and prosperous nation in history.

Yet on April 16, 2007, 32 lives were brutally taken at Virginia Tech—without warning—the result of a deranged mind seeking “revenge” on students and faculty who did him no harm.

In the aftermath of the bloodshed, bomb threats were made against schools across America. Plans for potential copycat massacres were uncovered. A NASA contract worker “went postal,” apparently over a poor employment review, and murdered a hostage before killing himself. A fourth-grader brought a disabled hand grenade to school because he thought it would be “cool.”

And in the wake of these events, a young woman stared into the camera of a cable news network, pleading for the American people to pray for her friend, who she said was shot in the leg during the Virginia Tech shooting spree.

Yet her story was a lie, a callous hoax, a cold-hearted deception before millions of television viewers. Meanwhile, 32 people had died in a pool of their own blood and others suffered from gunshot wounds, broken bones and bruises.

Speaking of the modern-day descendants of ancient Israel, prophecy states, “The Lord has a controversy with the inhabitants of the land, because there is no truth, nor mercy, nor knowledge of God in the land. By swearing, and lying, and killing, and stealing, and committing adultery, they break out, and blood touches blood” (Hosea 4:1-2).

In Ezekiel 22, God likens the modern house of Israel—primarily the American and British peoples, along with Canada, Australia and other birthright nations—to ancient Jerusalem, which is spiritually called Sodom (Revelation 11:8). He declares, “The city sheds blood in the midst of it, that her time may come, and makes idols against herself to defile herself. You are become guilty in your blood that you have shed” (Ezek. 22:3-4).

Turn on the TV, and what will you see? The pursuit of pleasure at almost any cost: prescription drugs for sexual enhancement—music videos glamorizing all things debased—reality shows giving the untalented and the uncouth their “15 minutes of fame”—television “comedies” and dramas that place adultery, profanity and foul living on a pedestal, to be emulated by millions of fans.

Surf the Internet, and what will you encounter? The pursuit of pleasure taken to the extreme, with images of wanton sex acts in every combination depraved minds can devise—with filth passing itself off as music, freely available with just a mouse click—with shallow celebrity gossip masquerading as “news”—with email scams fishing for unsuspecting prey who can be lured into financial snares—with teens proudly posting to their webpages intimate details of their lives, unknowingly setting themselves up to be stalked, harassed…or worse.

A generation of pleasure seekers, living recklessly and without discretion, ignorant of the divine fury scheduled to be unleashed from above. A people whom God says “sets up his idols in his heart, and puts the stumblingblock of his iniquity before his face,” and “are all estranged from Me through their idols” (Ezek. 14:4-5).

What happens when a people “shed blood” and defile themselves with their idols?

“And you have caused your days to draw near, and are come even unto your years: therefore have I made you a reproach unto the heathen, and a mocking to all countries. Those that be near, and those that be far from you, shall mock you, which are infamous and much vexed” (Ezek. 22:4-5).

Anti-Americanism is on the rise around the world. European nations were quick to criticize America’s “gun culture,” but dared not criticize the Islamic world for its share of violence. Countries that once feared the saber-rattling of Washington have grown voices, loudly calling for the downfall of the “American Empire.” The U.S. can no longer even count on Britain as it had done in past generations.

What happens when leaders in government and industry wield power over the weak and helpless to “shed blood”—to extort, receive bribes and impose high-interest usury upon the “have nots” (vs. 6, 12-13)—whom God likens to “wolves ravening the prey, to shed blood, and to destroy souls, to get dishonest gain” (vs. 27)?

“The people of the land have used oppression, and exercised robbery, and have vexed the poor and needy: yes, they have oppressed the stranger wrongfully…Therefore have I poured out My indignation upon them; I have consumed them with the fire of My wrath: their own way have I recompensed upon their heads, says the Lord God” (Ezek. 22:29, 31).

What happens when a nation spouts religious rhetoric, claiming to be righteous and God-fearing—yet claim God’s Law is “done away” and “Grace, not works, is all you need”?

Of religionists who falsely claim to represent Him, God declares, “They have devoured souls; they have taken the treasure and precious things; they have made her many widows in the midst thereof. Her priests have violated My law, and have profaned My holy things: they have put no difference between the holy and profane, neither have they shown difference between the unclean and the clean, and have hid their eyes from My Sabbaths, and I am profaned among them” (Ezek. 22:25-26).

What happens when a nation removes God’s Law from being prominently displayed on government property—commandments, statutes and judgments that serve as “wisdom and your understanding in the sight of the nations” (Deuteronomy 4:5-6)?

Its citizens walk in spiritual darkness: “We grope for the wall like the blind, and we grope as if we had no eyes: we stumble at noonday as in the night; we are in desolate places as dead men” (Isaiah 59:10).

Failing to heed Proverbs 14:34—“Righteousness exalts a nation: but sin is a reproach to any people”—the hypocrisy and adultery prevalent among leaders in government, industry and religion naturally trickle down to the family unit, ripping it to shreds: “In you have they discovered their fathers’ nakedness: in you have they humbled her that was set apart for pollution. And one has committed abomination with his neighbor’s wife; and another has lewdly defiled his daughter in law; and another in you has humbled his sister, his father’s daughter” (Ezek. 22:10-11).

Husbands and wives no longer understand or appreciate their God-defined roles. Fathers and mothers have no idea of what it means to “Train up a child in the way he should go” (Prov. 22:6). Thus children are left to their own devices.

What happens when a nation seeks every pleasure imaginable, people whom God says “have despised My holy things, and have profaned My Sabbaths” (Ezek. 22:8)?

They no longer remember the special sign that identifies the Creator and His people (Ex. 31:13-17), and end up losing their national identity. They scoff at the idea of being descended from ancient Israel, who lost their identity after being carted off as slaves to foreign lands. They ignore God’s annual Sabbaths, which together reveal the path to achieving the wonderful future in store for humanity.

What happens when nations that have benefited from the promise made to Abraham, Isaac and Jacob—abundant crops and land, healthy livestock, and protection from military conquest—rely on international alliances rather than on the God who gave them national success?

They reject their Maker, His divine protection and deliverance, to engage in spiritual adultery, taking on “lovers”—political allies—who will eventually turn on them (Lamentations 1:1-2).

And when all the lovers of the modern house of Israel turn on her, these words, written thousand of years in advance, will become reality: “Thus says the Lord; Behold, I am against you…Seeing then that I will cut off from you the righteous and the wicked, therefore shall My sword go forth out of his sheath against all flesh from the south to the north: that all flesh may know that I the Lord have drawn forth My sword out of his sheath: it shall not return any more…every heart shall melt, and all hands shall be feeble, and every spirit shall faint, and all knees shall be weak as water: behold, it comes, and shall be brought to pass, says the Lord God” (Ezek. 21:3-5, 7).

A sword is being prepared, “sharpened to make a sore slaughter; it is furbished that it may glitter” (vs. 10), an instrument of bloodshed for a nation consumed with shedding blood daily.

What happens when a “rebellious nation…impudent children and stiffhearted” (Ezek. 2:3-4) refuses to examine itself and take heed?

Another bloody day will come. Another university massacre—another 9/11 attack—another day of bombings in London and other world-renown cities—future massacres that will appear suddenly, increasing in number and intensity.

An onslaught of bloody days for a bloody nation.

The Virginia Tech Massacre – Making Sense of the Carnage
On the morning of April 16, 2007, all eyes were on Virginia Polytechnic Institute and State University as the events of the deadliest school shooting in America’s history played out—an act committed by a then-faceless gunman. The nation watched for hours as the body count continued to rise, finally resting at 33.