This website requires the use of Javascript to function correctly. Performance and usage will suffer if it remains disabled.
How to Enable Javascript
Poll: Majority Wants Compromise in Washington—Except on Abortion 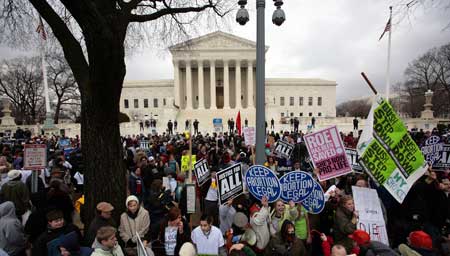 KRT
Abortion activists face off in Washington, D.C., in a rally to condemn the Supreme Court ruling that made abortion legal. (January 2006)

For years there has been much talk about the need for conservatives and liberals, Republicans and Democrats, to set aside ideological differences and work together.

According to an extensive survey by the Pew Research Center released January 22, 2006, 66% of the American public feels the United States is more politically polarized than ever before.

When asked what traits they like or dislike, 75% said they favor political leaders who are willing to compromise. Nearly two-thirds prefer leaders who hold to a mix of conservative and liberal positions.

Despite this, those polled sent mixed signals: 67% said they like politicians who stick to their positions, even if unpopular. While at least half are favorable to finding the middle ground in regard to the environment, illegal immigration and federal taxes, certain issues are not considered open for compromise, such as the war in Iraq.

Another issue in which Americans expect their leaders to stick to their position, whether Democrat or Republican, is abortion. Almost three-quarters (72%) say the political party that shares their view on abortion should stay the course, without compromise. Even among those who think highly of politicians willing to compromise, 68% are unwilling to bend on the abortion issue. Of those who say the Democrats more closely represent their views on abortion, 69% believe the party should stick to its position. Meanwhile, 76% of those who favor Republicans on this issue say the party should stay the course.

But why abortion? Even the mere mention of the word stirs vehement feelings from both sides of the ideological aisle.

Thirty-four years have passed since the U.S. Supreme Court ruled on Roe v. Wade—yet debate continues, with no end in sight: Does life begin at birth or conception? Is it a fetus or an unborn child? Is abortion a matter of personal choice, or is it murder?

Even the names of the opposing sides of the issue are not agreed upon. Is one side called pro-choice or pro-abortion? Is the other side pro-life or anti-abortion?

Those who say they are pro-choice believe the government should not be allowed to legislate what a woman can do with her body. They feel the legality of abortion should not be determined by men since it does not involve their bodies.

Those who say they are pro-life believe that all human life is precious, whether born or still in the womb.

Each side has its extremists. Some think abortion should be on demand, at any stage of pregnancy, and that even if underage children are involved, parents need not be notified. Others see abortion as murder, pure and simple. They then rationalize that it is acceptable to execute abortion specialists, thinking that the ends justify the means.

Along a sliver of middle ground are those who say they are personally opposed to abortion, yet feel it should remain legal. Yet even here disagreement abounds. “It depends on when you abort—at what stage of the pregnancy.” “It depends on why you abort—was the pregnancy due to incest? Rape? Will it endanger the life of the mother?” A January 2006 CBS News poll found that 33% of Americans said abortions should be permitted only in cases of these three situations. Yet a recent CNN poll shows that 64% of adults nationwide would oppose measures to repeal Roe v. Wade.

To curb the increasing number of abortions, but keep the procedure legal, education is hailed as a solution. “Instruct young minds in a sex-education curriculum presenting various birth prevention options,” goes the thinking. Yet again, common ground is lost, with calls ranging from teaching “abstinence only,” to “abstinence alongside contraceptives,” to the idea that it is impractical to teach teens to preserve their virginity.

Despite the ongoing contention, perhaps advocates on both sides of the issue share one thing: fear.

Pro-choicers fear the days of “back alley abortions” of yesteryear will return if the Supreme Court reverses its Roe v. Wade decision. They fear the specter of “Big Brother,” with the government probing the individual lives of the American public. And they fear religious beliefs—especially someone else’s—leading the government to establish and enforce laws.

Then there are those who agonize over the millions of unborn lives (these are diminished to simply being “pro-lifers”) that never saw the light of day. Most if not all advocates harbor strong religious convictions, with most believing that this life is the only chance people have for salvation.

The Daily Egyptian, a college newspaper for Southern Illinois University Carbondale, recently published an article—“Abortion, Life or Choice”—that addressed the ongoing debate. A member of one church said that legislation regarding social issues should not be based on religious teachings alone. But a pastor of a different congregation stated, “We’re calling people to submit to Christ and not kill their kids.” He added, “We’re trying to confront people, call them to faith and remind them that this is not their world; this is God’s world.”

But does this world—its governments, laws, education systems, cities, nations and general way of life—belong to God?

Consider the following excerpt from the booklet A World in Captivity, written by David C. Pack:

“You may have supposed that the governments of modern nations reflect God’s way. This is almost everyone’s assumption. Actually, while we will learn that God does, in fact, establish and remove nations, we will also learn that this is not God’s world. This is why Christ foretold the coming of God’s world-ruling supergovernment to replace the confused, ineffective and inefficient governments of man. These governments are powerless to solve any of the world’s biggest problems.

“How did the world come to be the way that it is? Why is it in such a state of confusion, suffering and ignorance? Why can’t governments get along—avoid war—find peace—reach agreement? Why such constant instability, scandal and division among leaders and seemingly endless revolutions and military coups? Why is there no shortage of demagogues, dictators and revolutionaries, who always promise to make things better, yet are only able to preside over a continual worsening of problems and conditions?

“Despite these conditions, most theologians, religionists and ministers blindly assume that this is God’s world—that it reflects His guidance, His way. Therefore, they conclude that if ‘all Christians would work together, in love and unity, to make this world and its governments a safer and better place for all, they could bring peace, happiness and prosperity to the world.’ This is a completely wrong view. Nowhere did Christ say, ‘Go into all the world and strive to make it a better place by becoming part of it.’ He often said, ‘Go into all the world and preach the gospel.’ Christ did not come to make this world a better place. He came to announce the coming of a better world, under His government!

“In short, blind, deceived men think that they can bring world peace through human effort alone. Ironically, this quest often involves ‘Christian’ nations striving to achieve peace through war. They see certain evil forces at work and feel compelled to ‘do something about it.’ They assume that Christ would be an ‘activist,’ seeking to ‘make the world a better place.’

Disagreement exists between and within the opposing sides of the abortion debate. Even those who profess to be Christian cannot agree on such an all-important subject. If human beings cannot dispel the confusion in this volatile issue—and remove the outright hostility that arises with it!—then who can?

One more question begs an answer: If this is not God’s world, then what is the “better world” that Jesus Christ announced?