Does the Bible teach that we should observe new moons?

On the day of the new moon, a special rite (to show the people that a new month had started) kept them up-to-date so that they could prepare in advance for any up-coming annual Holy Days, festivals and seasons. God preserved His sacred calendar (the Hebrew calendar) anciently through the work of the Levites, and as has been preserved today by the Jewish peoples. It is therefore unnecessary, in our modern times, to specially assemble on the first day of each month. (You may wish to read our booklet The Truth About God‚Äôs Calendar.)

In Colossians 2:16-17, the apostle Paul exhorts us, “Let no man therefore judge you in meat, or in drink, or in respect of an holyday, or the new moon, or of the sabbath days: Which are a shadow of things to come; but the body is of Christ.” This scripture has been interpreted by some to mean that we can eat or drink anything and that we can decide for ourselves which days are holy. This misinterpretation is the result of a translation error. The word “is,” italicized above, was not part of the original Greek text, but was later added by translators, who believed they were enhancing the meaning. Instead, the meaning was altered. It actually meant that only the Body of Christ—the true Church—was to judge or advise one with respect to a Holy Day, the timing of the new moon or Sabbath days (both weekly or annual), which represent past, present and future stages of God’s Plan of Salvation. 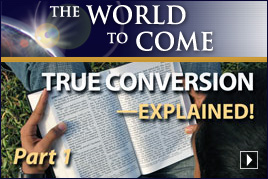 What does ‚Äúconversion‚Äù mean? Does this happen instantly, or is it a process? How can you know if‚Äîwhen‚Äîyou are converted? Here is real Christian conversion explained.
Watch Now
Watch LaterSavedRead Suggested Literature

Where are the dead? What are they doing? Are they aware of the living? Do the dead ‚Äúpass away‚Äù to heaven or hell? Do people have immortal souls? Does suicide really end it all? Will you see‚Ä¶
Order Now
Read NowRead LaterSavedRequest Added Download ePubDownload PDF