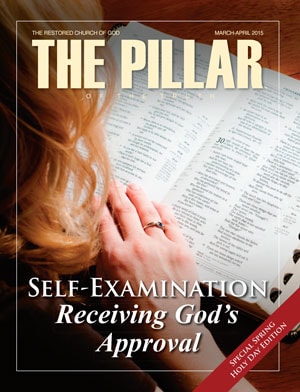 The Story Behind the Days of Unleavened Bread

Every spring, the true Christian stands out from the world around him. He can be seen vigorously cleaning his entire home, contorting himself into his car to make sure every nook and cranny is clean, and saying ŌĆ£No, thank youŌĆØ to complimentary bread at restaurants.

While members of GodŌĆÖs Church understand the meaning behind these actionsŌĆöremoving spiritual leaven from their livesŌĆöthere is much more to the story.

The spring Holy Days depict the beginning of GodŌĆÖs plan for salvation. The season begins with the Passover. Professing Christianity incorrectly claims that upon acceptance of that sacrifice, the only remaining obligation is to ŌĆ£just believe.ŌĆØ Although genuine belief is crucial, there is much more to do in order to qualify for eternal life.

The sacrifice of Christ covers the sins of those who truly repent. Once someone has come under the blood of Christ, having been forgiven of past sins, he has the opportunity for a new start. The very process of coming out of sin is what true Christians must do once their slate has been wiped clean.

Even before coming under the sacrifice of Christ, a Christian has to acknowledgeŌĆöand regretŌĆöhaving sinned as a way of life before being called. The process of coming out of sin is not instantaneous. It requires many years of overcoming and building character.

The meaning behind the Days of Unleavened Bread shows us what we must do!

GodŌĆÖs people, the Israelites, were commanded to put leaven out of their homes, off their property, and to instruct their children why they were doing this. It was to remind them of their exodus from Egypt. In addition, they were commanded to eat unleavened bread for seven days. GodŌĆÖs people today follow these same instructions, as they are an ordinance to be kept forever.

(2) Does God command that the first day and seventh day of Unleavened Bread be observed as Holy DaysŌĆötimes of commanded assembly? Leviticus 23:4-8; Numbers 28:17-18, 25.

The first and seventh days are Holy Days, in which no servile work is to be done. They are days on which we are commanded to assemble. GodŌĆÖs people are also to give special offerings on these days.

Later in His life, Jesus directed His disciples to make arrangements for the Passover meal (Mark 14:12-16). The same God, who commanded Passover be observed forever, also commanded that His people keep the Days of Unleavened Bread as an ordinance forever.

This command also requires that we eat unleavened bread each of the seven days (Ex. 13:6-10).

Paul expressed that we are to keep the Feast of Unleavened Bread. (We will discuss the central meaning of leavening in more detail later.)

In Revelation 11:8, the great city (referring to JerusalemŌĆöRevelation 16:19) in its sinful state was spiritually compared to Sodom and Egypt. In Hebrews 11:24-27, we find that Moses rejected the pleasures of sin that Egypt offeredŌĆöchoosing to obey God and suffer along with His people, while looking beyond the attraction of this temporary, evil world. Egypt signifies this world, with all of its enticing pleasures of the fleshŌĆöall of them sin!

The Israelites began from Rameses, located in the land of Goshen, where they lived. After approaching the Egyptians on the day of Passover to ŌĆ£borrowŌĆØ (Ex. 11:2) treasures from them (actually to receive the fair wages they never received as slaves), they assembled on the night beginning the 15th of AbibŌĆöthe ŌĆ£Night to Be Much Observed.ŌĆØ

We are to commemorate this event today by sharing a special meal on the evening beginning the Days of Unleavened Bread. Instead of solely focusing on Israel leaving Egypt, however, we are to also remember how God brought us out of the worldŌĆÖs sinful ways.

Soon after gathering and organizing according to tribes, they set off on their journey, and continued traveling throughout the coming days until they reached the Red Sea.

(7) After Israel left, did God cause Pharaoh to have a change of heart? Exodus 14:8. Did the people of Israel panic upon learning that they were trapped by the Egyptians? Exodus 14:10-12.

As Israel was escaping Egypt, it appeared that the Egyptians had trapped them between the Red Sea to the east and the Pihahiroth mountains to the south (Ex. 14:2-4).

Pharaoh intended to destroy as many helpless Israelites as possible with his well-equipped armyŌĆöthe most powerful in the world at that time.

Flavius Josephus recorded that the Egyptian army that chased Israel included 600 chariots, 50,000 horsemen, and 200,000 footmen (Antiquities of the Jews). Pharaoh pursued those leaving the bondage of Egypt just as Satan attempts to block anyoneŌĆÖs efforts to flee the bondage of sin.

As Egypt typifies sin, so Pharaoh is a type of Satan.

Only by God parting the Red Sea was Israel delivered from the Egyptians. The seven Days of Unleavened Bread (Ex. 12:15) picture leaving spiritual Egypt and completely coming out of sin.

Departing from Egypt required effort from Israel as well as GodŌĆÖs intervention. Likewise, we have to exert sustained, persistent effort with GodŌĆÖs help to put sin out of our lives.

(9) Did the apostle Paul have to address a particularly grievous sin in Corinth around the time of the Days of Unleavened Bread? I Corinthians 5:1. Did the brethren, who tolerated such sin, consider themselves to be especially forgiving and righteous? I Corinthians 5:2. What did Paul command to be done with the offender in this matter? I Corinthians 5:4-5. What did he say someone in this puffed up condition should do? I Corinthians 5:6-7.

After condemning their puffed up condition, Paul warned that even a tiny amount of leaven can leaven a large amount of dough, just as the smallest sin can corrupt oneŌĆÖs character. He then charged them to purge out old leavening.

Paul emphasized the importance of putting away the spiritual leaven of sin, pride and self-righteousness. This analogy would have been useless if brethren had not been familiar with the annual act of eliminating physical leaven during this season.

(10) Having put away old leavening, both physically and spiritually, what did Paul command brethren to do next? I Corinthians 5:8.

Paul explicitly commanded the Corinthian brethren to keep the Days of Unleavened Bread. The old leavening, which was thrown out, represents malice and wickedness, while an unleavened condition represents sincerity and truth.

The meaning of the Days of Unleavened Bread defines what God expects of His peopleŌĆöwe are to put out sin as a way of life!

Every spring, God wants us to go through the physical task of removing leaven from our homes. Yet He does not want us to focus on that physical task only, but also to be reminded of the greater spiritual meaning of these days.

Before being called, we were in bondage to sin. Our calling was our exodus from EgyptŌĆösin.

For the rest of our lives, we must clean sin out of our character. We must replace it with GodŌĆÖs holy, righteous character so we will be able to be part of His Family!