This website requires the use of Javascript to function correctly. Performance and usage will suffer if it remains disabled.
How to Enable Javascript
Russia Poised to Annex Occupied Ukraine after “Sham” Vote 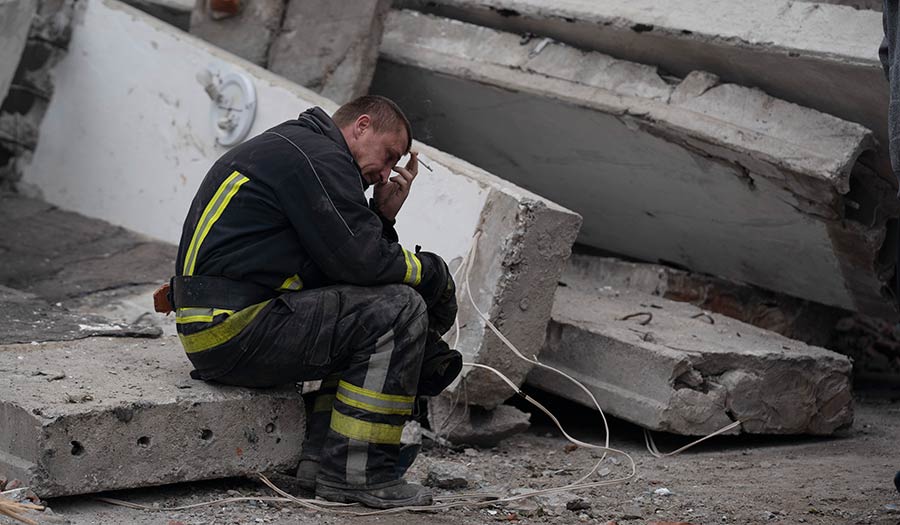 AP/Leo Correa
A rescue worker takes a pause as he sits on the debris at the scene where a woman was found dead after a Russian attack that heavily damaged a school in Mykolaivka, Ukraine (Sept. 28, 2022).

KYIV, Ukraine (AP) – Russia was poised Wednesday to formally annex parts of Ukraine where occupied areas held a Kremlin-orchestrated “referendum”—denounced by Kyiv and the West as illegal and rigged—on living under Moscow’s rule.

Armed troops had gone door-to-door with election officials to collect ballots in five days of voting. The results were widely ridiculed as implausible and characterized as a land grab by an increasingly cornered Russian leadership following embarrassing military losses in Ukraine.

Moscow-installed administrations in the four regions of southern and eastern Ukraine claimed Tuesday night that residents had voted to join Russia.

“Forcing people in these territories to fill out some papers at the barrel of a gun is yet another Russian crime in the course of its aggression against Ukraine,” Ukraine’s Foreign Ministry said, adding that the balloting was “a propaganda show” and “null and worthless.”

The ballot was “falsified” and the outcome “implausibly claimed” that residents had agreed to rule from Moscow, the Washington-based think tank Institute for the Study of War said.

Pro-Russia officials in Ukraine’s Donetsk, Kherson, Luhansk and Zaporizhzhia regions said Wednesday they would ask Russian President Vladimir Putin to incorporate their provinces into Russia. It was not immediately clear how the administrative process would unfold.

According to Russia-installed election officials, 93 percent of the ballots cast in the Zaporizhzhia region supported annexation, as did 87 percent in the Kherson region, 98 percent in the Luhansk region and 99 percent in Donetsk.

Western countries, however, dismissed the balloting as a meaningless pretense staged by Moscow in an attempt to legitimize its invasion of Ukraine launched on February 24.

The U.S. ambassador to the United Nations, Linda Thomas-Greenfield, said Washington would propose a Security Council resolution to condemn the “sham” vote. The resolution would also urge member states not to recognize any altered status of Ukraine and demand that Russia withdraws its troops from its neighbor, she tweeted.

“This is another violation of Ukraine’s sovereignty [and] territorial integrity, [amid] systematic abuses of human rights,” he tweeted.

Ukraine’s Foreign Ministry statement asked the EU, NATO and the Group of Seven major industrial nations to “immediately and significantly” step up pressure on Russia with new sanctions and by significantly increasing their military aid to Kyiv.

The Kremlin remained unmoved amid the hail of criticism. Spokesman Dmitry Peskov said that at the very least, Russia intended to drive Ukrainian forces out of the Donetsk region, where Moscow’s troops and separatist forces currently control about 60 percent of the territory.

Russia is calling up 300,000 reservists to fight in the war and warned it could resort to nuclear weapons after this month’s counteroffensive by Ukraine dealt Moscow’s forces heavy battlefield setbacks. The partial mobilization is deeply unpopular in some areas, however, triggering protests, scattered violence and Russians fleeing the country by the tens of thousands.

The mobilization prompted the U.S. Embassy in Moscow to warn Americans in Russia to leave immediately because “Russia may refuse to acknowledge dual nationals’ U.S. citizenship, deny their access to U.S. consular assistance, prevent their departure from Russia, and conscript dual nationals for military service.” Earlier embassy security alerts also advised Americans to leave, saying they could be harassed and have difficulty obtaining consular assistance.

The EU expressed outrage over the suspected sabotage Tuesday of two underwater natural gas pipelines from Russia to Germany and warned of retaliation for any attack on Europe’s energy networks.

Mr. Borrell said “all available information indicates those leaks are the result of a deliberate act,” even though the perpetrators haven’t so far been identified.

“Any deliberate disruption of European energy infrastructure is utterly unacceptable and will be met with a robust and united response,” Mr. Borrell said in a statement on behalf of the EU’s 27 member countries.

The damage makes it unlikely the pipelines will be able to supply any gas to Europe this winter, according to analysts.