This website requires the use of Javascript to function correctly. Performance and usage will suffer if it remains disabled.
How to Enable Javascript
Explainer: Europe Struggles with Crisis as Russia Cuts Gas 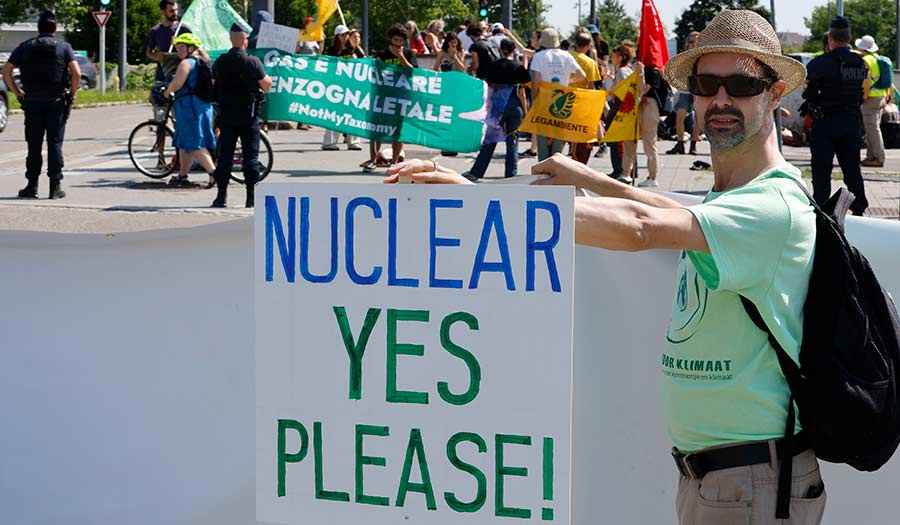 FRANKFURT, Germany (AP) – Europe is struggling to contain an energy crisis that could lead to rolling blackouts, shuttered factories and a deep recession.

The primary cause: Russia has choked off the supplies of cheap natural gas that the continent depended on for years to run factories, generate electricity and heat homes. That has pushed European governments into a desperate scramble for new supplies and for ways to blunt the impact as economic growth slows and household utility bills rise.

The crisis deepened when Russia’s state-owned exporter Gazprom said the main pipeline carrying gas to Germany would stay closed, blaming an oil leak and claiming the problems could not be fixed because of sanctions barring many dealings with Russia.

European officials say it is energy blackmail, aimed at pressuring and dividing the European Union as it supports Ukraine against Russia’s invasion.

Here is the latest on Europe’s efforts to avoid an energy disaster.

Did Russia Cut Off Gas to Europe?

Just about. The halt in the Nord Stream 1 pipeline means Russian gas shipments have fallen 89 percent from a year ago. Russia used to supply 40 percent of Europe’s natural gas, and even more to Germany, where inexpensive energy was a pillar of the economy.

There is still some Russian gas flowing to Europe through a pipeline passing through Ukraine into Slovakia, and another crossing the Black Sea to Turkey and then to EU member Bulgaria. Russia started cutting back gas as early as last summer, before the war in Ukraine started. That sent gas prices sharply higher.

Then Gazprom cut off a number of European countries after they responded to the outbreak of the war by banning many dealings with Russian banks, businesses and persons.

The reductions have led to soaring natural gas prices, which have hit records in the past few weeks. Given Russia’s slow constriction of supplies since last summer, experts say Europe needs to be ready for zero Russian gas this winter.

Why Is Russian Gas So Important?

High energy prices are already threatening to cause a recession this winter through record inflation, with consumers having less to spend as costs rise for food, fuel and utilities. A complete cutoff could deal an even heavier blow to an already troubled economy.

Besides heating homes and generating electricity, gas is used to fire a range of industrial processes that most people never think much about—forging steel to go into cars, making glass bottles and pasteurizing milk and cheese.

Companies warn that they often cannot switch overnight to other energy sources such as fuel oil or electricity to produce heat. And, with everyone searching for alternate supplies, fuel oil and coal have also risen in price.

In some cases, equipment that holds molten metal or glass is ruined if the heat is turned off, and over the longer term, energy-intensive businesses may simply give up on Europe.

Is the Problem Just About High Natural Gas Prices?

No. Electricity prices also have skyrocketed because gas is a key fuel to generate power. To make matters worse, other sources of power have lagged for reasons not connected to Russia.

Drought has undermined hydroelectric power from rivers and reservoirs. France’s fleet of 56 nuclear power plants is running at half-strength because of shutdowns over corrosion problems in key pipes and repairs, updating and safety checks. A heat wave limited use of river water for cooling power plants, and lower water levels on Germany’s Rhine River reduced supplies of coal to generators.

In a role reversal, France is talking about sending natural gas to Germany, while Germany is exporting electricity to France. Usually it is the other way around.

Analysts at Rystad Energy say Europe could face a serious electricity shortage as soon as this month. This winter, a worst case of cold weather, low wind generation and a 15 percent cut in gas use “would prove very challenging for the European power system, and could lead to power rationing and blackouts.”

“Regardless of the exact scenario, the coming winter is certain to be the most challenging Europe has seen in decades—and consumers or governments are expected to pay the price,” said Carlos Torres-Diaz, head of power at Rystad Energy. “If gas demand needs to be cut, we expect to see power supply issues emerging this month and worsening into 2023.”

What Is Europe Doing to Ease the Crisis?

Europe has lined up all the alternative gas supplies it could: shipments of liquefied natural gas, or LNG, that come by ship from the United States and more pipeline gas from Norway and Azerbaijan. LNG is much more expensive than pipeline gas, however.

Germany is keeping coal plants in operation that it was going to shutter to reduce greenhouse gas emissions. It also is keeping the option of reactivating two nuclear plants it is set to shut down.

The 27-nation EU has approved a plan to reduce gas use by 15 percent by next March, roughly the amount experts say will need to make up for the loss of Russian gas. Yet those conservation measures are voluntary in member countries for now.

National governments have approved a raft of measures: bailouts for utilities forced to pay exorbitant prices for Russian gas, cash for hard-hit households and tax breaks.

For example, Germany has approved a third support package with 65 billion euros ($64.3 billion) in aid for consumers. That kind of spending will add to national deficits but also soften the downturn that economists are predicting for the end of this year and beginning of next year.

More steps are coming. The president of the EU’s executive Commission, Ursula von der Leyen, says a new proposal will include a price cap on natural gas and measures that could decouple the price of electricity from gas.

Perhaps most important in the short term, Europe has managed to fill 82 percent of its storage for winter with the help of LNG and diminished consumption because of high prices. Storage levels have kept rising even after the Nord Stream 1 cutoff.

Partly as result, gas prices have fallen to their pre-cutoff level, although they are still painfully high.

What Is Russia’s Game?

Even as gas sales dwindled, skyrocketing prices helped maintain Russia’s income from those sales. Oil and gas imports were initially exempt from sanctions because Europe was dependent on Russian energy. Europe has banned Russian coal and will ban most Russian oil at the end of the year.

Russia’s revenue from fossil fuel exports reached 158 billion euros from February to August, according to the Helsinki-based Centre for Research on Energy and Clean Air.

But oil has tended to be the Kremlin’s main moneymaker, and unlike gas in fixed pipelines to Europe, can be sold worldwide by tanker. And the gas relationship with Europe may be gone for good—and with it, any influence it might have brought.

“The gas flows from Europe no longer play a role in my calculations,” German Vice Chancellor Robert Habeck said. “The only reliable thing from Russia are lies.”

So if Russian President Vladimir Putin thinks he has any leverage from gas, time is running out for him to use it.

“Russia has lost nothing now that it hadn’t lost already…this winter is the last chance to use the gas weapon, successfully or not,” tweeted Janis Kluge, an expert on the Russian economy at the German Institute for International and Security Affairs.