This website requires the use of Javascript to function correctly. Performance and usage will suffer if it remains disabled.
How to Enable Javascript
New York Supermarket Shooting Probe to Weigh if Warning Signs Were Missed 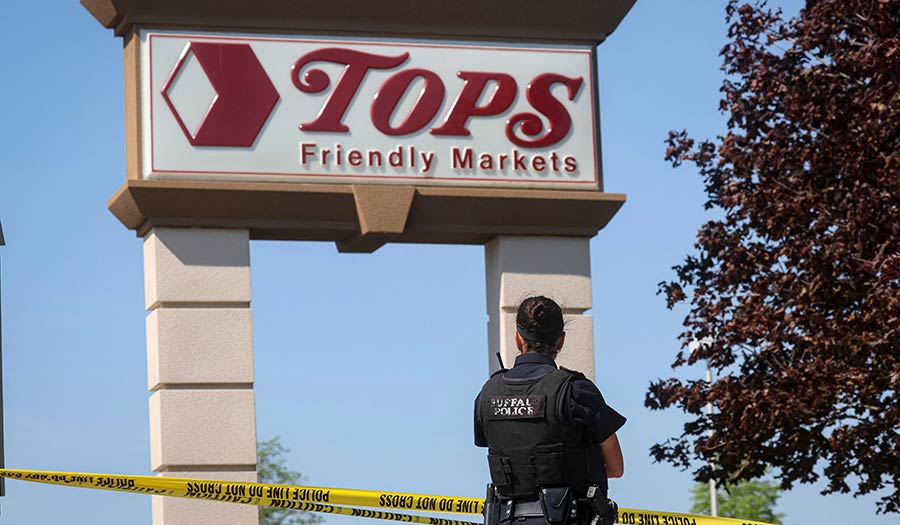 Reuters/Brendan McDermid
A Buffalo police officer stands at the scene of a shooting at a Tops supermarket in Buffalo, New York (May 15, 2022).

BUFFALO, New York (Reuters) – An investigation into the weekend shooting of more than a dozen people at a western New York supermarket will turn on Monday to whether authorities missed telltale signs and red flags left by the teenage gunman prior to his racist killing spree.

Authorities said Payton Gendron, 18, carried out an act of “racially motivated violent extremism” when he opened fire with a semi-automatic rifle on Saturday at the Tops Friendly Market in Buffalo, where 11 of the 13 wounded were black.

“The evidence that we have uncovered so far makes no mistake this is an absolute racist hate crime that will be prosecuted as a hate crime,” Buffalo Police Commissioner Joseph Gramaglia told reporters on Sunday.

Besides seeking a clearer understanding of the motives for Gendron’s attack, authorities will focus on what could have been done to stop him, as details of the teenager’s troubling behavior in high school and his online presence began to emerge.

Gendron figured on the radar of local law enforcement last June, when police detained him after he made a “generalized” threat at his high school, Gramaglia said.

Given a mental health evaluation at the time, he was released after 1.5 days.

A 180-page manifesto that circulated online, believed to have been authored by Gendron, outlined the “Great Replacement Theory,” a racist conspiracy theory that white people were being replaced by minorities in the United States and elsewhere.

Another online document appeared to have been written by Gendron sketched out a to-do list for the attack, including cleaning the gun and testing the livestream he would use to relay it on social media.

A spokesperson for the Erie County district attorney’s office declined to comment on the documents.

Gendron surrendered to police after the shooting and was charged with first-degree murder, which carries a maximum term in New York of life in prison without parole, but he has pleaded not guilty.

Authorities said Gendron drove to Buffalo from his home several hours away a day before the attack to make a “reconnaissance” on the area.

On Saturday afternoon, he drove to the grocery store, where he commenced the assault that he broadcast live on social media platform Twitch, a live video service owned by Amazon.com.

Dressed in tactical gear, Gendron opened fire with a semi-automatic rifle he had bought legally, but then modified illegally. In his car, authorities found two other guns, a rifle and a shotgun.

New York Governor Kathy Hochul said she was dismayed that the suspect managed to livestream his attack on social media, which she blamed for hosting a “feeding frenzy” of violent extremist ideology.

Social media and streaming platforms such as Twitch, which said it removed the livestream within two minutes, have grappled for years with the task of controlling violent and extremist content.

“The user has been indefinitely suspended from our service, and we are taking all appropriate action, including monitoring for any accounts re-broadcasting this content,” a Twitch spokesperson said.