This website requires the use of Javascript to function correctly. Performance and usage will suffer if it remains disabled.
How to Enable Javascript
Why Can’t America Find Justice and Peace?

Until we all look to what the Bible really says about inequality and oppression, we will never heal our racial divide.

AP/Julio Cortez
A protester carries a U.S. flag upside down next to a burning building in Minneapolis, Minnesota (May 28, 2020).

It took just eight minutes and 46 seconds to set the world ablaze. First, tempers flared while watching the video of a police officer putting his knee on the neck of a handcuffed George Floyd as he lay on the pavement. Next thing we knew, the fires were literal.

In every corner of the U.S., as well as across the globe, the cellphone video of Floyd’s slow death set off turbulent and sometimes violent demonstrations against police brutality, racism and inequality.

The fires were often symbolic: a police station in Minneapolis as well as squad cars there and across the nation. Yet other blazes were from unbridled rage (at best) or sheer opportunity (at worst): everything from tiny family-owned businesses to high-end luxury brand stores.

Racial tension is perhaps the thorniest issue in the United States, yet some facts are undeniable.

Clearly inequality exists. One example: Despite black Americans making up just 12 percent of the nation in 2017—they make up 33 percent of the prison population, Pew Research found in 2017. Conversely, whites make up 64 percent of the U.S.—and a mere 30 percent of inmates. From this and many other statistics, the protesters have a point. Something is wrong here.

Yet it is also wrong to pelt police officers with frozen water bottles and fiery insults. As is breaking into ATMs and looting iPhones from an Apple Store. 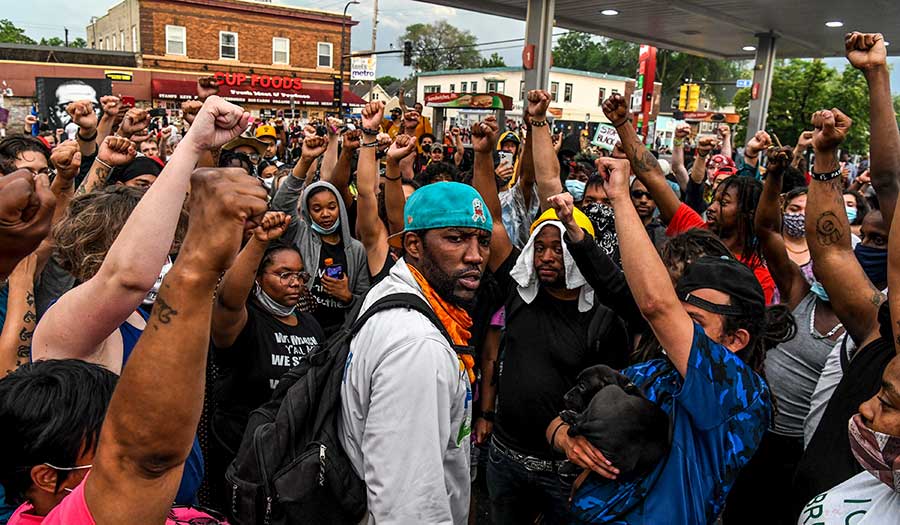 Herein lies a conundrum. If you say one potentially critical thing about violent protesters, you can find yourself inadvertently branded a racist—even if you agree there are systemic problems in the U.S. Same is true when empathizing with the police, many of whom are merely doing their jobs.

To discuss this topic, one must walk on a razor’s edge. This is perhaps most true with politicians. They have to work with law enforcement to keep cities safe. Yet they cannot ignore the voices of protesters else they risk their future in office.

Regarding New York City, which saw some of the worst violence, the state’s governor has attempted to walk that fine line. In a move not often seen in U.S. politics, he sat down for a press conference with a Bible in hand. He proceeded to quote a trio of scriptures:

• “Blessed are the peacemakers: for they shall be called the children of God” (Matt. 5:9).

Americans want peace. Yet, amid burning police cars, overturned trash cans and broken glass, frustrated protesters cried out, “No justice, no peace!” They are sick of what they see and seek an end to bigotry and prejudice.

While the Bible speaks often about peace, it also speaks volumes about impartial justice. Those on both sides of the issue have quoted Scripture to defend their position. Yet, as with any Bible topic, you cannot cherry-pick verses to serve your purpose. Instead, you must look at the entirety of the Book to understand God’s mind on race, justice and the rule of law.

No matter what side you find yourself on in this argument—for, against, or anywhere in between—what the Bible says about this topic will come as a surprise. And it is the only way to heal America’s racial divide.

The place to start is in the Old Testament. Hidden among the little-read laws and statutes for ancient Israel are verses that explicitly and exhaustively state how “strangers” should be treated. The comparison of Israel and America today is more applicable than it may first appear. Those considered strangers were foreigners who moved into the nation, were not well established, and did not have an inheritance. Usually these would be of different races.

While “strangers” in the Old Testament are not exactly the same as minorities in the U.S., there are similarities. America is a majority-white nation—yet it is also a melting pot with African Americans, Hispanics, Asians, etc. What the Bible says about the treatment on this topic is informative.

Keep reading in the next verse: “But the stranger that dwells with you shall be unto you as one born among you, and you shall love him as yourself; for you were strangers in the land of Egypt: I am the Lord your God” (vs. 34).

God wanted Israel to never forget they were once foreigners in Egypt—where they were definitely treated violently!

For emphasis, this command is repeated throughout the Books of the Law:

Exodus 22:21 – “You shall neither vex a stranger, nor oppress him: for you were strangers in the land of Egypt.”

Exodus 23:9 – “Also you shall not oppress a stranger: for you know the heart of a stranger, seeing you were strangers in the land of Egypt.”

Deuteronomy 1:16 – “And I charged your judges at that time, saying, Hear the causes between your brethren, and judge righteously between every man and his brother, and the stranger that is with him.”

Notice there should be the same judgment among all men, no matter their race.

A longer passage from Deuteronomy 10 drives this point home: “For the Lord your God is God of gods, and Lord of lords, a great God, a mighty, and a terrible, which regards not persons, nor takes reward: He does execute the judgment of the fatherless and widow, and loves the stranger…Love you therefore the stranger: for you were strangers in the land of Egypt” (vs. 17-19).

God is not a respecter of people and emphasizes the importance of justice and outflowing concern for those with less—here labeled the fatherless, widow and stranger.

How serious does God take this? “Cursed be he that perverts the judgment of the stranger, fatherless, and widow” (Deut. 27:19).

These verses all show God’s mind on oppressing those who have less. Yet, it is not the full picture. There are many commands on how the strangers should conduct themselves…

In ancient Israel, there was one law. God made clear it would be the same for both natural-born citizens and foreigners: “You shall have one manner of law, as well for the stranger, as for one of your own country: for I am the Lord your God” (Lev. 24:22).

Something similar is repeated in Numbers: “One ordinance shall be both for you of the congregation, and also for the stranger that sojourns with you, an ordinance forever in your generations: as you are, so shall the stranger be before the Lord” (Num. 15:15).

Having one set of laws for Israelites and strangers alike was one more way God protected the rights of those foreign-born. Yet it also meant they needed to follow those laws.

This included keeping the Sabbath: “But the seventh day is the sabbath of the Lord your God: in it you shall not do any work, you, nor your son, nor your daughter, your manservant, nor your maidservant, nor your cattle, nor your stranger that is within your gates” (Ex. 20:10).

They were also required to keep the Holy Days (Atonement in this instance): “And this shall be a statute for ever unto you: that in the seventh month, on the tenth day of the month, you shall afflict your souls, and do no work at all, whether it be one of your own country, or a stranger that sojourns among you” (Lev. 16:29).

And one more general command from God to drive the point home: “You shall therefore keep My statutes and My judgments, and shall not commit any of these abominations; neither any of your own nation, nor any stranger that sojourns among you” (18:26).

Breaking the Law in the Old Testament had real consequences—these were meted out the same for natural- and foreign-born citizens.

Put these two towering points together. God is clear: He does not want those with less to be mistreated or their justice to be perverted. Yet He is also emphatic: Everyone must keep and obey the law.

In Old Testament times, minorities were to keep all of God’s Law, yet the majority Israelites were to do the same. The entirety of ancient Israel had to do all that God commands if it wanted fairness and justice for every member of society. The same applies for nations today. God does not want America to vex its strangers—or any segment of society. But He also wants all to keep His commands.

Who Should Sort This Out?

Within the context of the U.S. today, what should people do if they see inequality or a lack of justice? Romans 12:19 is a controlling verse: “Dearly beloved, avenge not yourselves, but rather give place unto wrath: for it is written, Vengeance is Mine; I will repay, says the Lord.”

While the Bible shows God’s mind on justice, it also shows how He will handle these matters. Perhaps surprisingly, the Bible shows that He will personally judge individuals for how they treat the downtrodden.

Here is what God says in the prophetic book of Ezekiel: “The people of the land have used oppression, and exercised robbery, and have vexed the poor and needy: yes, they have oppressed the stranger wrongfully…Therefore have I poured out My indignation upon them; I have consumed them with the fire of My wrath: their own way have I recompensed upon their heads, says the Lord God” (22:29, 31).

Notice how those who “turn aside” the stranger are lumped in with sorcerers and adulterers! This is a deadly serious matter to God, who is fair Himself and desires all to do the same. Now notice Zechariah 7:10, which states: “Oppress not the widow, nor the fatherless, the stranger, nor the poor; and let none of you imagine evil against his brother in your heart.”

Also in Jeremiah, God tells the people of Judah that if it will “thoroughly amend your ways and your doings; if you thoroughly execute judgment between a man and his neighbor; if you oppress not the stranger, the fatherless, and the widow, and shed not innocent blood in this place, neither walk after other gods to your hurt: then will I cause you to dwell in this place, in the land that I gave to your fathers, for ever and ever” (7:5-7).

Further, it states: “Thus says the Lord; Execute you judgment and righteousness, and deliver the spoiled out of the hand of the oppressor: and do no wrong, do no violence to the stranger, the fatherless, nor the widow, neither shed innocent blood in this place. For if you do this thing indeed, then shall there enter in by the gates of this house kings sitting upon the throne of David, riding in chariots and on horses, he, and his servants, and his people. But if you will not hear these words, I swear by Myself, says the Lord, that this house shall become a desolation” (22:3-5).

Go reread those verses again, if needed. Hidden behind the somewhat dense King James English is God saying He will personally deal with those who oppress the strangers and all who are downtrodden.

The race issues in the U.S. are utterly complicated and cannot be solved by small policy changes. Trying to decide who is right and wrong in these situations is equally problematic. The Bible outlines how all in any nation can live together in harmony. Mercifully, God Himself will soon come and bring the righteous justice longed for—as well as the lasting peace all desire.