This website requires the use of Javascript to function correctly. Performance and usage will suffer if it remains disabled.
How to Enable Javascript
Protesters Call to ‘Defund the Police.’ What Would That Look Like?

Protesters Call to ‘Defund the Police.’ What Would That Look Like? 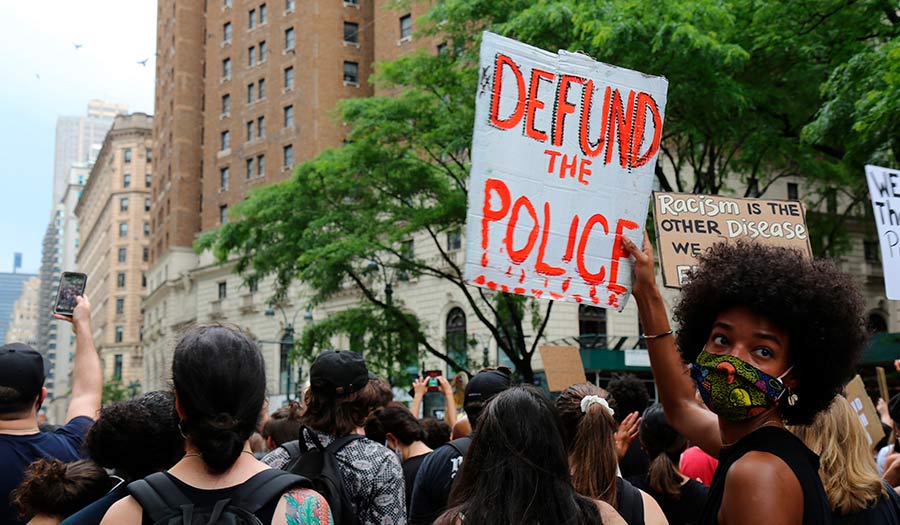 Nationwide protests over the Minneapolis police killing of George Floyd have featured a common rallying cry: “Defund the police.”

The movement predates the current protests and is driven both by anger at the militarized posture of many U.S. police departments and by the recognition they are being called on to confront social ills including addiction, mental illness and homelessness that, advocates say, could be better addressed by spending on social services and rethinking what behaviors should be considered crimes.

But what does “defund the police” mean? It is not necessarily about gutting police department budgets. Still, some activists and lawmakers have clouded this already complicated message by raising the possibility of completely disbanding police departments.

What Do People Mean by “Defund” the Police?

Others see it as a call to slash city police budgets, which have grown significantly since the 1990s, particularly after a 1994 crime bill signed by President Bill Clinton, according to criminal justice activists. Policing and corrections accounted for about 30 percent of general funding in Atlanta and Orlando in 2017, and nearly 40 percent in Chicago, according to a report from the Center for Popular Democracy, an advocacy group.

State and local governments spent $115 billion on policing in 2017, according to data compiled by the Urban Institute.

Defunding advocates say money saved on policing could then be diverted to social programs.

“They don’t think the police can be fixed, so they’re trying to figure out how to reduce the burden of policing,” said Alex Vitale, a sociology professor at Brooklyn College who wrote the 2017 book “The End of Policing.”

How Are Cities Responding?

A majority of the members of the Minneapolis City Council said on May 7 that they support disbanding the city’s police department. Nine of the council’s 12 members appeared with activists at a rally in a city park that afternoon and vowed to end policing as the city currently knows it.

“It is clear that our system of policing is not keeping our communities safe,” Lisa Bender, the council president, said. “Our efforts at incremental reform have failed, period.”

Disbanding an entire department has happened before. In 2012, with crime rampant in Camden, New Jersey, the city disbanded its police department and replaced it with a new force that covered Camden County. Compton, California, took the same step in 2000, shifting its policing to Los Angeles County.

In Los Angeles, city officials proposed cutting up to $150 million from the police department’s $3 billion budget this week, as part of a broader wave of spending cuts. Mayor Eric Garcetti, a Democrat, said the goal was to free up money “so we can invest in jobs, in health, in education and in healing.”

In New York City, which faces a $9-billion deficit, city council members pushed back against Democratic Mayor Bill de Blasio’s plans to cut the police budget by less than 1 percent while slashing youth services by one-third. Council members instead proposed a 5 to 7 percent cut for all agencies, including police.

Comptroller Scott Stringer has proposed a more sweeping overhaul, saying the city could save $1.1 billion over four years by reducing the number of police officers and cutting overtime. He proposed the savings be put toward “social workers, counselors, community-based violence interrupters, and other trained professionals.”

Generally, police and union officials have long resisted cuts to police budgets, arguing that it would make cities less safe. Large-scale reductions in spending could result in a rise in crime.

“There will be a backlash as you see crime go up,” said Houston Police Chief Art Acevedo, who also serves as president of the Major Cities Chiefs Association.

Chicago Mayor Lori Lightfoot June 5 told reporters that “what I’ve heard from people in neighborhoods is that they want more police protection not less.”

The Los Angeles Police Protective League, the union for the city’s rank-and-file officers, said budget cuts would be the “quickest way to make our neighborhoods more dangerous.”

“Cutting the LAPD budget means longer responses to 911 emergency calls, officers calling for back-up won’t get it, and rape, murder and assault investigations won’t occur or will take forever to initiate, let alone complete,” the union’s board said in a statement last week.

“At this time, with violent crime increasing, a global pandemic and nearly a week’s worth of violence, arson, and looting, ‘defunding’ the LAPD is the most irresponsible thing anyone can propose.”

After Days of Protest and Rage, Memorials Offer Time for Introspection
Hollywood celebrities, musicians and politicians gathered in front of the golden casket of George Floyd at a memorial Thursday for the man whose death sparked global protests.