This website requires the use of Javascript to function correctly. Performance and usage will suffer if it remains disabled.
How to Enable Javascript
Can Gun Violence Protesters Turn Hopes into Political Reality? 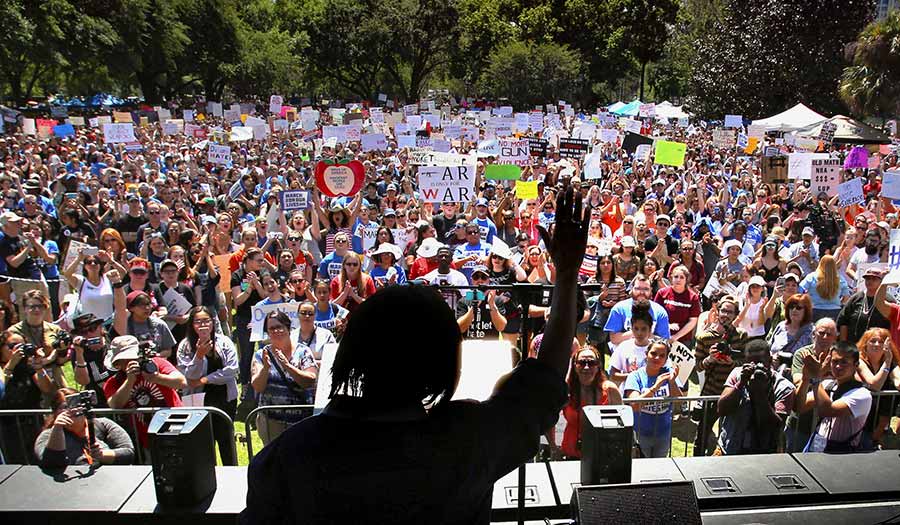 Joe Burbank/Orlando Sentinel via AP
A congresswoman responds to demonstrators during a rally against gun violence in downtown Orlando, Florida (March 24, 2018).

They have walked out, marched and demanded action across America to stop gun violence. But it is far from certain that the young people involved in the “March for Our Lives” movement will be a political force at the ballot box this fall.

Republicans are skeptical. Democrats are hopeful. And outside groups that favor gun control are not taking any chances.

Organizations aligned with Democrats on gun control are spending tens of millions of dollars to ensure that young voters’ passion and enthusiasm does not fade before the November midterm elections, when the Republican Party’s control of Congress will be put to the test.

“Other people look at those young people and think organizing them makes no sense because they don’t vote,” said Tom Steyer, the billionaire hedge-fund magnate-turned-liberal activist who has committed at least $31 million this year to what is believed to be the largest youth vote organizing effort in American history. “We really believe in this generation.”

Past voting patterns show how much work Mr. Steyer and others have ahead of them. Just 15 percent of eligible voters between the ages of 18 and 20 cast ballots in the last midterm election. If the age range is expanded to between 18 and 29, the average midterm rate is no higher than 21 percent—36 percent lower than the overall average—the Cooperative Congressional Election Study found.

Yet this difficulty in rallying the youth to vote is nothing new. During the Vietnam War-era draft, just 54 percent of Baby Boomers voted in the 1972 presidential election. That is just four points higher than the 50 percent voting rate for Millennials in 2016.

The Economist explained a common reason younger generations do not vote as widely. It stated that “young people today do not feel they have much of a stake in society. Having children and owning property gives you a direct interest in how schools and hospitals are run, and whether parks and libraries are maintained. But if they settle down at all, young people are waiting ever longer to do it. In 1970 the average American woman was not yet 21 years old when she first married, with children and home ownership quickly following. Today women marry at 26 on average, if they marry at all, and are likely to want a career as well as children. People who have not settled down are not much affected by political decisions, and their transient lifestyles can also make it difficult to vote.”

Yet there is a problem looking at “March for Our Lives” as a purely youth-driven movement, though there are vocal young adults involved.

Look at the demographics of the crowd for the March 24 protest against gun violence in Washington, D.C., which drew anywhere from 200,000 to 800,000 people. According to The Washington Post: “Contrary to what’s been reported in many media accounts, the D.C. March for Our Lives crowd was not primarily made up of teenagers. Only about 10 percent of the participants were under 18.”

It continued, stating that the “average age of the adults in the crowd was just under 49 years old.”

Organizations will pump millions into rallying the youth vote, yet history is not on their side. So what about the protests themselves? Can they turn into true legislative change?

Back in 2000, about 750,000 people swarmed the capital for the biggest gun control rally in the nation’s history. It was in the wake of the horrific Columbine shooting. Dubbed the “Million Mom March,” it had a similar demographic makeup to “March for Our Lives.”

Yet most today do not even remember this event took place—let alone see it as the birth of any movement. There has been minimal change to gun laws in the nearly two decades since.

Then why can we seemingly do nothing about it?

Step back even further. Think of man’s worst problems. The ones that have beset him for millennia: disease, pollution, poverty, ignorance, religious confusion, war, terrorism, crime, violence, hunger, immorality, slavery, oppression, political upheaval and much more.

Even with legislative changes, these problems persist. More often than not, they grow worse and even more complex as time goes on. Ask yourself: Why?

Read Why Man Cannot Solve His Problems for the answer.